For a while I've wondered if there was a way to quantify the effectiveness of a forward's forechecking ability and the ability of a defenseman to withstand pressure from opposing forwards. Well, (huge) thanks to The Forechecker hooking me up with a spread sheet that allowed me to separate giveaways and takeaways by the zone in which they occurred, we're on our way to getting where we want to be, metric-wise.

Now, giveaways and takeaways are notoriously subjective stats, but if they're only being used to compare players on the same team, they should be fair game, since everyone on a given team is playing before more or less the same set of official scorers throughout the course of a season (extended injuries or benchings would perhaps skew things, but we're going with "close enough" for now).

More importantly, takeaways and giveaways are mutually exclusive statistics, meaning that every turnover is either one or the other. Therefore, a forward whose pressure forces a defenseman to "give away" the puck does not get credit for a takeaway, and likewise a defenseman who has the puck "taken away" from him is not charged with a giveaway. Odd, but that's the way it is (for example, in Wednesday night's Caps game, the Thrashers had 12 giveaways and two takeaways, while the Caps had 19 giveaways and ten takeaways), and, like I said before, we're going with "close enough" for now.

With that introduction out of the way, let's dig into the numbers a bit.

First, a look at the forechecking forwards. Since there's not much forechecking to be done on the penalty kill, these numbers represent takeaways in the offensive zone per sixty minutes of even strength plus power play ice time (through Sunday): 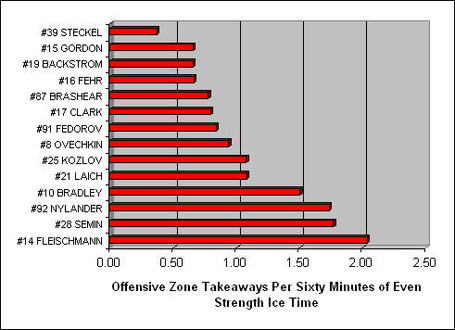 Surprised? Since this measures only takeaways and not forced giveaways, it makes sense that the top few players here are sneaky stick-lifters (though I'm surprised Nicklas Backstrom isn't higher). My gut tells me that if we could include forced giveaways, Matt Bradley would be atop the list. Regardless, this shows that Tomas Fleischmann's game in the offensive zone really is clicking (relatively, of course), and not just in terms of lamp-lighters.

Now on to the blueliners. Similar to the forwards, we'll exclude one type of ice time, but this time it's power play time (since the rearguards are unlikely to be under much pressure in their own zone with the extra man), leaving us with this chart of giveaways in the defensive zone per sixty minutes of even strength plus shorthanded ice time (through Sunday):

John Erskine fans of the world rejoice? Not so fast. Again, recall that this number is incomplete - when a blueliner has his pocket picked by a forward who is credited with a takeaway, it's not showing up here. These are mostly intercepted outlet passes, which is why it's not surprising (though is disappointing) to see Mike Green as the team's worst in this metric. Throw in those takeaways, however, and my bet is that Milan Jurcina would be at the bottom of this list by miles.

So there's a quick look that tries to tell part of the story on forechecking at both ends of the ice.  Now, if we could just get the NHL to track the missing data (i.e. from whom takeaways are taken and to whom giveaways are given), we'd be on to something, and if the League could get more consistent in its definitions of those terms, we'd really havind a useful metric. For now, however, we'll take what we can get and do what we can with it.