An Outsider's Look at Alex Ovechkin: One of the NHL's Most Dominant Players

It's a given that Caps fans love Alex Ovechkin - but we're not the only ones.

Share All sharing options for: An Outsider's Look at Alex Ovechkin: One of the NHL's Most Dominant Players

Our love for Alex Ovechkin is often experienced and expressed only within the friendly confines of fellow Caps fans; perhaps that is a bit of self-preservation, after enduring years of criticism for those who just don't watch him enough to know. But over the past two years, a funny thing has started to happen: people from the outside remembered why they fell in love with him in the first place.

That brings us to our good friend Kyle, of Winging It in Motown fame - a Red Wings fan who is unabashedly smitten with the Caps captain (as we all are) and wanted to join in our celebration of the newest member of the 500-goal club. Take it away, Kyle...

Washington D.C. is one of the luckiest cities in the NHL.

Yes, this coming from the Red Wings fan who has grown up seeing multiple superstars and elite hockey craftsmen hoist that big shiny trophy they call Stanley four times (sorry about ‘98... but not really). Listen, that’s neither here nor there. What matters is that you Capitals fans might be some of the most fortunate fans in hockey right now. Why is that? I’m sure you can guess just by looking at the headline, or photo I have chosen for this article. You get to watch Alexander Ovechkin every night. You get to witness one of the best goal-scorers in league history do what he does best.

Ovechkin’s game is the definition of Russian hockey: Simple, dominant, beautiful. Over the last decade, Ovi has scored more goals than most NHL players will score points in an entire career. In an era of the NHL where goals are fewer and farther between than they were back when Gretzky was around, he seemingly defies all odds and nullifies that. In fact, I am willing to bet that if you put Ovechkin back in Gretzky’s era, history would have likely been sculpted differently.

You can argue that today’s game is completely different, and you would be absolutely right. With technology, stick differences, and advances in physio, this is certainly a different game. But man, think about it - goalies are bigger than they have ever been, their pads are almost double the size that they were back then, and they play a style that covers for more of the net. Yet you always see "8" sitting in his office, ripping pucks past them as if he were engineered to do it.

His shot is perfect. It’s a poetic blend of velocity, precision, and accuracy. It’s dangerous from all angles. Ovechkin has crafted his shot to be the closest thing to "unstoppable" in the current-day NHL. I’m sure most of you have done this before, as you’ve had the good fortune of watching him every game over the last 10+ years, but watch one of Ovechkin’s shots coming out of his wheelhouse in slow motion. The moment his stick flexes is one of the most mesmerizing images in hockey. Once I get this time travel thing figured out, I’m going back to Ancient Rome and having that very image sculpted out of marble, or whatever the hell they sculpted stuff out of back then.

501 goals in 801 games. The man has never gone below 32 goals in a season once in his career. To put it lightly, the man is a bona fide cyborg of hockey. Ovi reminds me a lot of what Jagr is - a guy who has a lot of goddamn fun doing this, and wants to do it until his body gives out on him. It’s not crazy to think that he will play into his 40’s, and it’s not crazy to think that he’s going to break Gretzy’s record (824).

I feel like the obvious thing to gush about is his elite goal-scoring abilities that have reached the upper-echelon of NHL history, but there’s more to Ovechkin than that. One of my most favorite things about Ovi is the way he skates. He’s fast, agile, and has one of the most unique, and terrifying strides in the game. Seriously, when he starts to pick up his feet to gain speed, he looks exactly like a stallion, galloping its way to yet another highlight reel goal (if horses could indeed score goals.) It’s breath-taking, and could be considered one of the main attributes that makes him such a dangerous and dominant athlete.

How I fell in love with the Detroit Red Wings 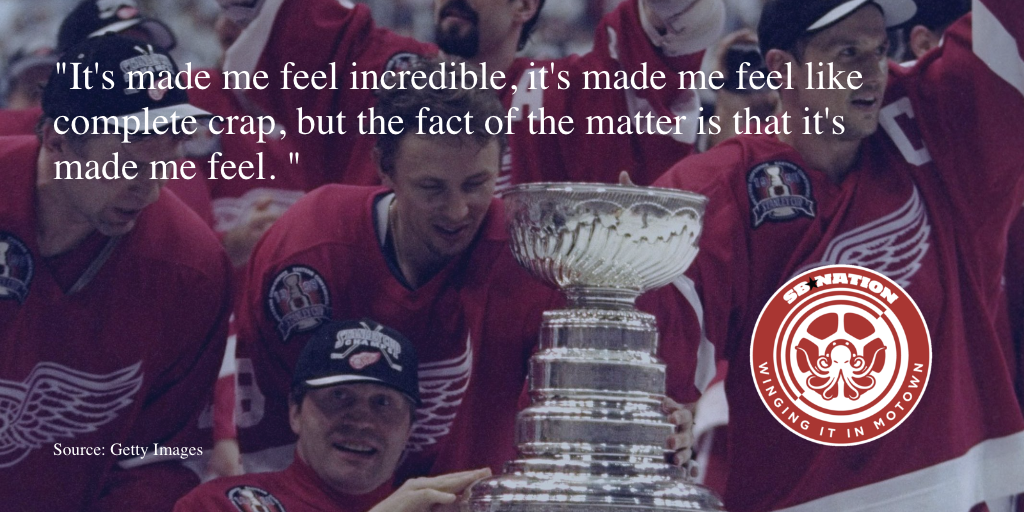 If I could make one comparison, I imagine that watching Ovechkin play for your team is a lot like watching Sergei Fedorov in his prime. Obviously they're completely different players, but as a child growing up watching hockey in my grandma's basement, Fedorov was one of those players that gave you goosebumps when he had the puck. You knew that when 91 was skating through the neutral zone then entering the other team's zone, it was likely that very special things were about to happen. If you're interested, you'll find one of my articles above on how I fell in love with the Red Wings, and hockey overall. Little spoiler: Fedorov played a huge part in it, and the excitement that Ovechkin brings to the game is comparable.

I’ll close my thoughts with another one of the most underrated things about Alexander Ovechkin: he is universally loved and respected by his peers. I’m not sure I’ve ever witnessed an entire team jump off the bench to celebrate a milestone in the middle of a game like the Capitals did with Ovi. It was awesome to see, and quite frankly, extremely moving on an emotional level. For a guy who catches so much flak from the mainstream media for not being a "complete player," Ovechkin sure is adored and praised by everyone else.

I remember awhile back, I saw an interview with him and I couldn’t help but to think to myself "what a cocky jerk." Fast forward to today, and I have a completely different perception of that. He’s not cocky, he just knows that he’s the best at what he does. So if you’re a member of the media who thinks Ovechkin needs to be a "complete player" to take his team over the top, quit it. Quit hating fun. Quit complaining about the lack of goal-scoring in the NHL, then try and breakdown one of the best scorers in history. Just stop.

Okay, this was long-winded... but I don’t really get to write about The Great Number 8 unless he’s playing Detroit. Which by the way, as a fan of a different team, I can say that watching him play us while on the power play is the most anxiety-inducing thing I endure in regular season sports. You guys are jerks.

All I can really say is that I will cheer for you, Capitals. Get this man his Stanley Cup. He deserves it.