What is Marcus Johansson Worth?

There may not be a player on the Caps roster about whom opinions vary so dramatically... and this time, it might take arbitration to settle the differences.

Share All sharing options for: What is Marcus Johansson Worth?

Among the NHL Entry Draft Class of 2009, Marcus Johansson ranks fifth in points and assists (trailing three lottery picks and Ryan O'Reilly) and has the seventh-most goals. Johansson is coming off a 2014-15 campaign in which he set career highs in goals (with his first 20-goal season), points, shots and games played and is a pending restricted free agent (RFA).

And yet, it's hard to get a handle on what he's worth, not just in general, but to this Caps team specifically. Is he an important source of secondary scoring for a team that has lacked it, or a regular-season producer who isn't cut out for the sport's second season? Is he a legitimate top-six forward or a passenger who's ridden others' coattails to strong numbers? How do you put a price on what he does and, more importantly, what you think he's going to do?

As we did with the team's higher-profile RFA, let's take a closer look at Johansson and what he's worth. So, Rob... what're you thinking?

Rob: MoJo has put the Caps in a tough spot here, and it's unfortunate. He's a useful player and the Caps have put a lot of time and money into developing him, so you wouldn't want to lose him now. But let's be real here, the guy is a one-dimensional player that has succeeded with choice assignments. He's been a staple on the best power play unit in the league during his career to date. He's spent more even strength time on the ice with Alex Ovechkin and Nicklas Backstrom than any other forwards. As a result, he's put up respectable numbers, numbers that will surely get him paid by an arbitrator, but not numbers that the Caps should distort their tenuous salary cap structure to accommodate.

With the additions of Justin Williams and T.J. Oshie the Caps have better options for the top line right wing. Andre Burakovsky offers more game-breaking skill and has already shown better ability to play center than Johansson has in his career. The top six is suddenly crowded, and Johansson is the least impressive contender. The Caps should look to move him for assets (and cap space) that can address other needs.He's had his chance and we know he's not the answer to the secondary scoring woes this team has had for Ovechkin's career.

Putting aside his power-play production for a moment (even though those goals count too), since coming into the League, Johansson has posted five-on-five stats that include:

Granted, as you note, he's spent a ton of time alongside Alex Oveckin.

But here's the kicker - those are his numbers in more than 2,500 minutes without Ovechkin (and it's also worth noting that Johansson's on-ice goal differential at fives is nearly three-quarters of a goal per 60 minutes better without Ovechkin than it is with him).

Johansson was fourth on the Caps with 32 even-strength points last year and second in even-strength goals with 17, and only two of his five-on-five goals and three of his five-on-five assists came with Ovechkin on the ice. The reality is that Johansson is developing into an even-strength threat on his own, regardless of who his linemates are, and is comfortably a second-line producer, as his career 1.62 P/60 and .58 G/60 would indicate - here it is, broken down by season:

And that's with of his 114 of his 345 career regular season games played under Adam Oates and another 59 under Dale Hunter - almost exactly half of his career played under two of the worst coaches the franchise has had in decades.

I don't disagree that he's a movable asset, but let's be real about what he's worth - he's a young and improving skilled forward, something the Caps (and the rest of the League) should value pretty highly.

Rob: Those rate stats without Ovechkin are surprising, but let's be real here, any time Johansson isn't playing with Ovechkin he's playing against easier competition. Obviously, that doesn't negate the entire point, every team needs guys that can score against easier competition, but I do think those rate stats tend to overstate his quality (and, personally, it doesn't pass the sniff test to put MoJo on the same level with a lot of those comparisons).

But more importantly, if Johansson really is the offensive player you're painting him as, why do Ovechkin's numbers improve without Johansson? It's obviously not because Ovechkin is facing easier minutes away from Johansson, so at the very least it implies that the other opposite-wing options have performed better with Ovechkin than Johansson has. So in the best light you can paint him, Johansson is a secondary player that can put up decent rate stats against weaker competition, and pulls down the team's best players when he gets promoted to the first line. That is indeed the profile of a replaceable player (although currently he actually isn't movable since the Caps can't trade him with the pending arbitration, adding to the tough spot the team is in Ed. Note: He can be traded.).

In any event, this best-light picture of Johansson is extemely favorable. Witness his HERO chart:

That's not great for a guy that has been stapled to the top six; that looks a whole lot more like a second line / third line tweener than a legit top six, yet he's posturing for a legit top six paycheck.

Now, to be fair, that HERO chart is a three-year span, so it includes two seasons under the worst coaching we've seen in the modern NHL era. But the chart  is by no means conclusive on Johansson, and that bottom row relating to his impact on his teammate goal differential is downright scary for a guy that is relied upon to play with highly talented players.

Bottom line, he's a second / third line guy who's been played like a first / second line guy and wants to be paid like a first line guy. The Caps can't trade him, and walking away from an arbitration award would be awful asset management. So the Caps are going to pay him, one way or another, and he'll be in the starting night lineup. So, accepting that as reality, what's he worth? For an RFA second / third line tweener, I'll open the bidding at $3 million per year. 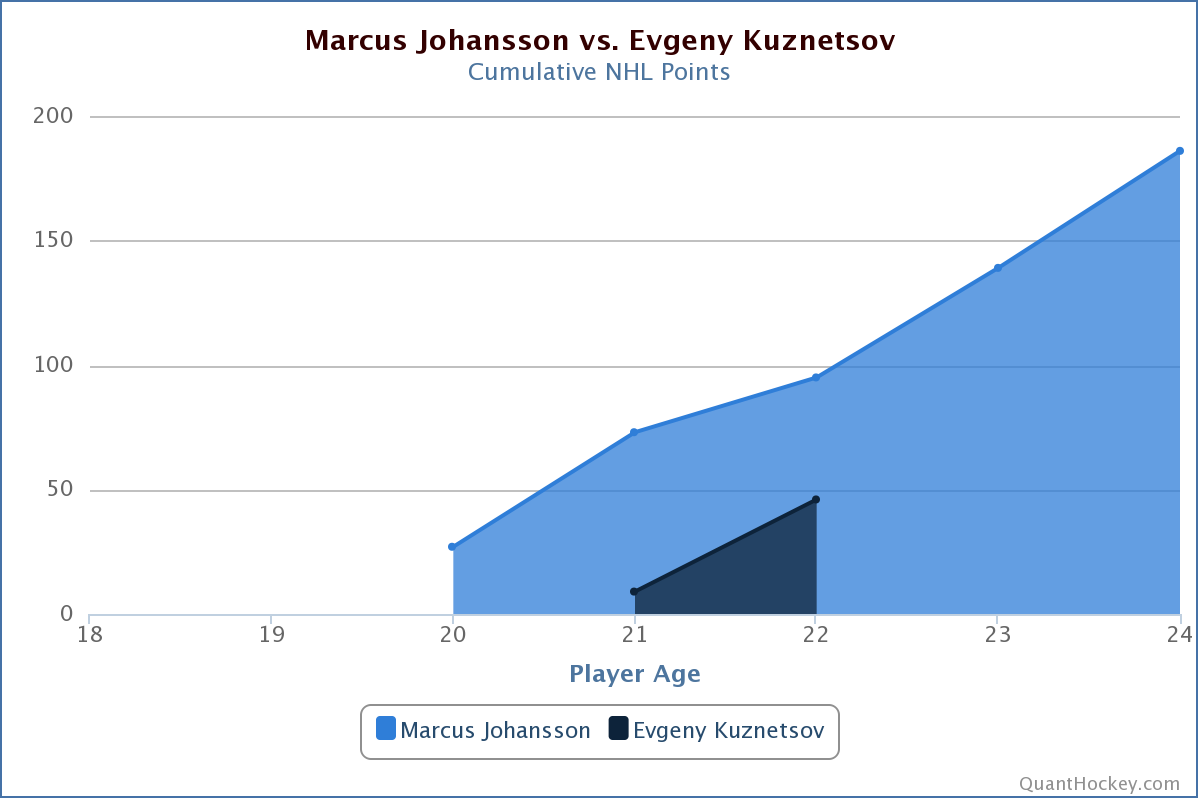 J.P.: Isn't $3 million what the team just gave Evgeny Kuznetsov for two RFA years? That's a deal, incidentally, which is 50% richer than Johansson's last one, despite Kuznetsov not being nearly as accomplished as Johansson was when he signed that deal (see the inset). Are you starting negotiations with Braden Holtby at $3.5 million, too?

Obviously that's too low, even for RFA years, and if we start talking about UFA years, it's even more unrealistic. As of Friday afternoon, General Fanager had 164 forwards with a cap hit of $3 million or more. That's an average of more than five per team. Add in top-six forwards on entry-level contracts making less than that (Filip Forsberg has a cap hit under $900,000!) and we're up well over six per team.

Johansson has demonstrated that he's a top-six forward and deserves to be paid like one as he continues to develop. Our pals Neil Greenberg (here) and Pat Holden (here) provided their thoughts on what Johansson was worth on his next deal, and I tend to agree with their estimates - Marcus Johansson is worth around $4 million in today's NHL, and maybe a tick higher if we're talking about buying UFA years with this deal. There are 116 forwards - an average of nearly four per team - who will have a cap hit of $4 million or more next season, and Johansson arguably should be number 117.

Rob: There are some different contextual factors going on with Kuzentsov (i.e., the KHL threat and his non-NHL pro experience), but fair point. Even so, Kuznetsov won the second line center job, an opportunity Johansson has repeatedly failed to capitalize on. But you're right, the market is the market. So let's call it $3.75 million (a hefty raise) on a short-term deal for him to prove himself a bit more and to see where he fits on this Caps team (with Jakub Vrana on the horizon) going forward. There's no need to commit long-term to Johansson right now, and the team should be hesitant to do so. You, on the other hand, should not be hesitant to buy another round...