Tomorrow marks the five-year anniversary of the thrilling "Snovechkin" game between the Caps and Pens - take a look back at the events leading up to and surrounding that memorable duel.

The winter of 2009-10 was a memorable one for those living in and around the DC area, for two big reasons. One, of course, was the continued surge of the Washington Capitals,  as they steamrolled over the rest of the League under the watch of new captain Alex Ovechkin.

The other? Snow. Lots of it. More than we had seen in over a century, with a seemingly endless string of monster storms that coated the area with several feet of snow. The first such storm, nicknamed Snowpocalypse, landed in mid-December and dropped anywhere from 15 to 25 inches of snow in and around the District; at the time, it was seen as the winter's Main Event. Nothing could top it.

Nothing...  until the mother of all snowstorms hit in early February, crippling the region and threatening to delay any number of local events - including a much-anticipated battle between the Capitals and Penguins.

But this was hockey. This was Caps-Pens. This was Ovechkin vs. Crosby, Round 342,598. It would not be shut down because of a few flurries, not if hearty hockey players (and fans) had their say. So the game went on as planned - and five years later, it still sticks out as one of the more memorable events in a season seemingly filled with them, putting an exclamation point on a 14-game winning streak with a breathtaking come-from-behind victory.

And it's all part of the story of how a little storm that started as Snowmageddon eventually became known only as Snovechkin.

So strap on those snowshoes and stroll down frozen memory lane with us as we look back at that weekend, five years later...

The first murmurs of a potential storm over the upcoming weekend begin to surface... but they're just murmurs, and not very serious ones. To wit, Capital Weather Gang's Jason Samenow:

I should stress it is very unclear whether this precipitation event will manifest itself as a significant snowstorm for the metro region. [...] in my experience many snowstorms simulated 5+ days out by computer models for the D.C. area do not materialize.

Within a few days, of course, the forecast has changed significantly, taking on a much more ominous tone:

The National Weather Service has issued a Winter Storm Watch for the entire metro region Friday morning through Saturday evening. They are highlighting the *potential* for more than 12" of snow, with localized amounts exceeding 20".

Okay, yeah, that's starting to sound bad. And it gets worse on Thursday:

It is hard to believe that we're about to see another storm like we saw in December -- usually a once in several year occurrence. But it's real and it's becoming increasingly likely that a historic event is in the cards. [...] The time is now to make final preparations as we are less than 24 hours out from the start.

Meanwhile, a different kind of panic is starting to take hold among Caps fans. Is it possible that the weekend's much-ballyhooed matchup between the Caps and Pens will have to be delayed... or worse, cancelled? Say it ain't so, Ted!

We will publish info on my blog and on our Washington Capitals website about the games but my bet is if the other teams are here, we will be playing both games.

This is hockey weather. If we can play, we will.

The storm, which the people in their ensuing wisdom have now dubbed "Snowmageddon" continues to barrel towards the DC area... and the wait is on.


The wrath of Snowmageddon... (via Capital Weather Gang)

The first flakes begin to fall. A few minutes later, all stores within a 50-mile radius are completely sold out of bread, milk and toilet paper.

With the worst of the storm in the rearview mirror, thousands of Washingtonians suffering from cabin fever take to social media - and then to the streets - to organize a massive snowball fight in Dupont Circle:

The Dupont Circle battle began with the burst of an air horn, then snowballs began raining in every direction. Hundreds watched from the perimeter of the circle, standing on park benches and snapping pictures with their phones. Others coordinated mass launches of snowballs toward the circle's fountain, which a thick mass of people seemed to be trying to defend. People shrieked, bellowed, ducked, ran and laughed -- a lot.

This city can be a weird, wonderful place to live sometimes.

But back to hockey...

As the Caps and their fans begin to dig out from the storm, the Penguins are in Canada for a matinee against the Montreal Canadiens.

The final horn sounds at Bell Centre and the Penguins, fresh off a 5-3 loss to the Habs, head to the airport to begin their trek to Washington - but this will be no ordinary trek. Because you can't just fly into a snowstorm. So instead, the Pens are planning to fly into beautiful Newark, NJ, catch a bus, and drive to DC. That's old school. 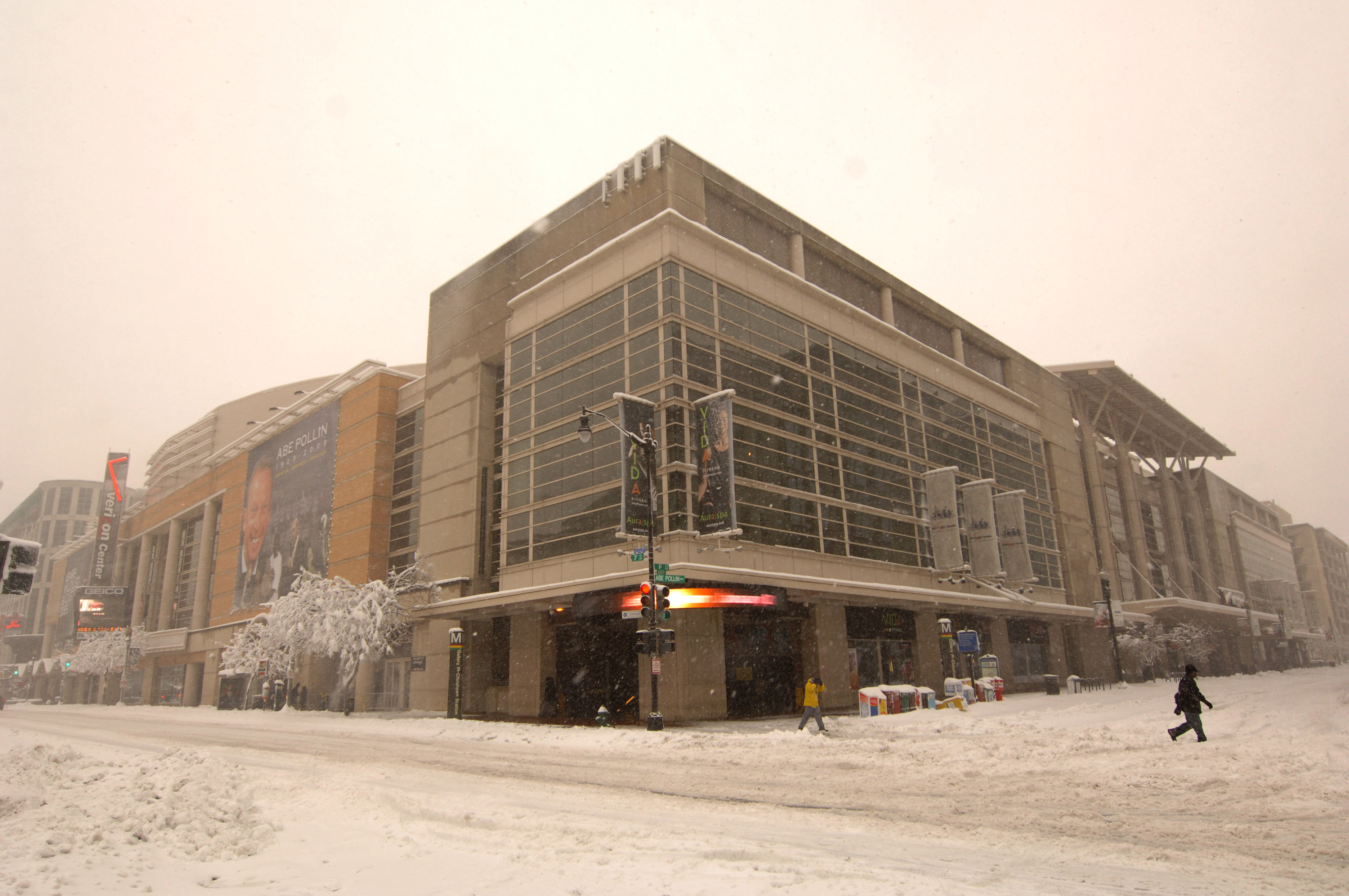 Once the Pens are on the road, the Caps make it official: there will be hockey tomorrow.

As of 10 p.m. ET Saturday, the Washington Capitals vs. Pittsburgh Penguins game scheduled for 12 p.m. on Sunday, Feb. 7, at Verizon Center remains as scheduled. The Penguins are en route to Washington, D.C., and are expected to arrive tonight.

After five hours on the road (and a late-night stop for fast food in Maryland), the Penguins' bus arrives in DC - with less than ten hours to go until the opening faceoff.

A few hours later, dedicated Caps fans begin making their way downtown for the game, unperturbed by snowy streets and crowded Metro trains in their quest to see the Caps and Pens do battle. Those that drive find kindred spirits on the road:

It certainly was worth the money for Capitals fans Frank Connolly, 45, and Ingo Burghardt, 42, who rode in together from Vienna with their families in Connolly's sport-utility vehicle. They said the trip took approximately 40 minutes and that traffic was light on Interstate 66 into the city.

"Most of the people we saw were Caps fans going to the game," Burghardt said. "There were a lot of red jerseys."

Others (including the team's own general manager George McPhee) take to public transportation, which is as reliable and effective as ever:

While District officials were urging commuters to avoid the roads and use public transportation, taking Metrorail wasn't exactly hassle-free. At the Farragut North stop, red-line trains were running infrequently, and a train arriving around 11:30 a.m. stalled at the station.

Many aggravated Capitals fans groaned as they exited the packed subway cars, rode the escalator back up to the station exit and began walking to Verizon Center. That trip took roughly 20 minutes and included plenty of slipping and falling on partly shoveled sidewalks and frozen streets.

With those brave souls who ventured into the winter wonderland settled in their seats, it's time for puck drop.

Things don't get off to the best start for the hometown team, as the Caps spot the Penguins two goals in the first ten minutes of the contest, both courtesy of Sidney Crosby.

Things tighten up a little bit heading into the second, as Alex Ovechkin pulls the Caps back to within a goal mid-way through the period. The goal, his 40th of the season, is fired with such authority that it smashes the net camera:

It's enough to give Verizon Center a bit of life... but only for a moment, because less than three minutes after Ovechkin cuts the lead in half, Jordan Staal gives the Pens back their two-goal lead. And then it's Staal again, just 1:24 later, and suddenly it's 4-1 Penguins with a little less than seven minutes to go in the second period. Not exactly what the good folks who made the trek to Verizon Center were hoping to see, that's for sure.

A 4-1 deficit seems like too deep a hole out of which to dig... but pretty soon it's 4-2, as Penguin-killer Eric Fehr gets on the board with less than three minutes left in the second to give his team and the fans a glimmer of hope, a reminder that there's plenty of time left.

And then Ovechkin takes over.

The Caps' captain steps in and brings the Penguins' lead down to one early in the third, checking in with his 41st goal of the year. It's 4-3. A little over four minutes later, he picks up the hat trick - and ties the game:

The comeback complete, all that remains is to determine who will emerge victorious. 60 minutes aren't enough to decide it, so the Caps and Pens head to overtime. And in the extra frame, the Caps get a break - Pens' defenseman Brooks Orpik is nailed for high-sticking Alexander Semin, and the Caps head to the power play.

He doesn't have to cool his heels in the box for very long.

The Caps need just 23 seconds to convert on the opportunity, as Ovechkin's drive from the left-wing faceoff circle is stopped by Fleury... but he can't stop Mike Knuble, who is parked in front of the net as always to stuff the loose puck past the Pens' goalie:

The building erupts as the Caps emerge victorious from one of the more entertaining games you'll ever see.

After the dust settles, everyone reflects on the events of the past 24 hours - or in Orpik's case, the last 23 seconds:

While Orpik focuses his energy on the high stick that perhaps wasn't, others talk about the always-entertaining clashes between the two teams, and how this one stacked up:

"It is always intense and people expect and emotional and intense game when these two teams play each other," Crosby said. "I think that is just the result."

This is what people pay to see. The superstars shined and there is tension and excitement and physical play. You could see the passion on both sides. This is what hockey is all about.

Of course, not everyone is thrilled with the game - or more accurately, with the fact that the game was played in the first place. With the District under a state of emergency, it's seen as unconscionable to subject fans and media to the hazards of winter weather just for a silly hockey game. Or so sayeth Pittsburgh scribe Rob Rossi:

To paraphrase what an agent once told me: This is a terrible, disgusting business, and we've all sacrificed something we would rather have back to be a part of it.

The NHL and NBC were willing to sacrifice the safety of everybody at Verizon Center on Sunday, and both companies should consider themselves fortunate that blood is not on their hands.

I had my truck. I was plowing snow out there. It was awesome. I had a lot of fun out there.

As did just about everyone else.

All told, Snovechkin would dump as much as three feet of snow on the region over the 24-hour period from February 5 to 6, 2010 - a tremendous amount of snow for a region that rarely gets more than a few inches, and more than enough to land the storm in the history books as the third-biggest ever recorded in DC.

But none of that deterred the thousands of Caps fans who dug themselves out after the snow had subsided and made their way to the Verizon Center on that gray Sunday afternoon. Those who did were treated to a truly spectacular game of hockey, one that made the trek in - and the slog back out - all the more worth it.