Canada Week gives the Caps a chance to unite, indivisible.

Good day, Washington, D.C. and all appropriately sympathetic territories! The second week of the Washington Capitals' 2015-16 season kicks off tonight as the team sweeps through Canada like word of a Tim Horton's menu change. Last week, the Capitals went 2-1-0 for four points, and currently sit third in the Metropolitan division.

Don't look now, but the Capitals have quite the deadly top six. The de facto first line of Alex Ovechkin-Evgeny Kuznetsov-T.J. Oshie could result in the most productive Russian-American partnership since the International Space Station. Always built around Ovechkin (and rightfully so), the old first-line formula for the Capitals used to be: surround Ovi with a playmaking passer, and some-third-body-is-that-a-mannequin-who-cares-whatever. 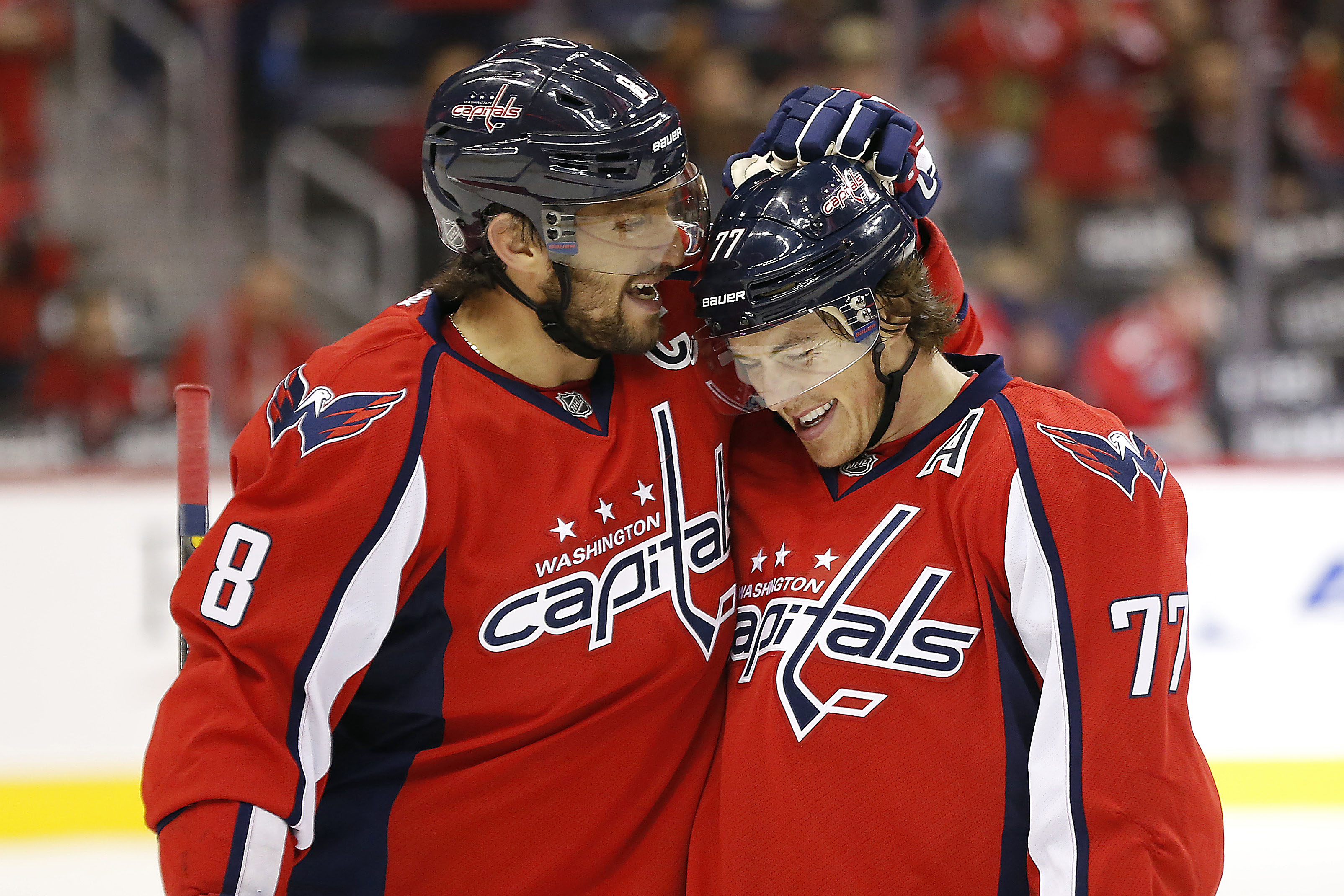 For what feels like eons now, since back when megalizards ruled the earth, Ovechkin's playmaker has been Nicklas Backstrom. Ovechkin-and-Backstrom. You say them in one breath, like "peanut butter and jelly" or "A Tribe Called Quest." This pairing has been prolific, procreative, and progenital. Indeed, there may be no better top-line twinsies in the league over the last five to seven years than Ovechkin and Backstrom. This is well-documented in the annals and bathroom stalls of hockey history.

As for that third top-line spot, well...the Capitals have used the same strategy as a failing airline with a safety problem: throw something on the wing and see what sticks. Last season alone, players as disparate as Marcus Johansson, Jason Chimera, and Jay Beagle each took their turn on the line, each with mixed results. There was simply no obvious in-house answer for the job. Enter the off-season, and T.J. Oshie. Oshie is big, fast, talented, and tough, attributes that make him an ideal hockey player or drag performer. He is a bona fide, no-arguments, top-line skater, and that should have been the end of the discussion about the top six.

But, you can always count on a young Russian to sneak in when you least expect it and steal your heart (call me, Dmitry!). It surprises no one that Evgeny Kuznetsov is good. Heck, Washington fans have been waiting for him to make an appearance in the NHL for years, now. He was the most anticipated Capitals prospect since Ted Leonsis hinted he was considering Free Taco Tuesdays at Verizon. What is a walloping good surprise is how good he is so fast. Call it chemistry with his fellow Russian, call it the maturation of a mensch from the Motherland, call it без разницы, but the fact is the 23-year old has supplanted Backstrom on the top line.

Let that sink in for a moment. How good is Kuznetsov? He's that good.

Now, the Capitals' top line consists of two elite scorers, passers and skaters. Two guys that each nearly require a double team to defend when working in the offensive end. Two guys that could each be the top scoring option on about 20 of the 30 teams in the league. And who is the third guy on that line? Oh, Alex Ovechkin, the greatest offensive player in a generation.

And of course, this glut of talent at the top trickles down, like a melting ice cream or an unproven economic theory, to the next line. Suddenly, Backstrom is the Caps' second-line center. Winging him? Conn Smythe-winner Justin Williams, and 20-goal scorer Marcus Johansson. Shiver, ye forests. Quake, ye ground.

Look, maybe there is a team out there whose checking line and top defensive pairing can shut down the Capitals top line. Maybe there is alien life. I cannot disprove either. But there is not a second-grouping in the league that can hang with the Capitals' second line when their first grouping gets tired. Nicklas Backstrom will systematically pick you apart, gerrymandering your defense with surgically-precise passes until none of your positioning makes sense.

The megalizards of old are back, folks. And they're wearing home-red sweaters.

THE IMPORTANCE OF SPACING YOUR FEARS

Hockey is a game of a million consequent now's, a thousand if-then propositions per minute and barely-seen battles won that together, if stacked numerous enough and in the proper order, lead to victory. Shooting the puck into the net is one of the battles, yes, but just one, and nothing but a phantasm if not for all the battles won before it. On offense, the most important battle is the one that creates space.

Yes, the creation of space can be difficult. Hell, it took God a week. But nothing can proceed offensively without a little room to work; a little space to complete a pass, a little gap to take a shot, a little void to draw out your defender. In hockey, space is created by skill, and the threat thereof. Watch T.J. Oshie receive a pass. If his legs are not already in stride (which they often are), his feet will start to move immediately. He will take the defender for a ride. He will make the other guy move. The defender has to, because Oshie is skilled enough to get around him if he doesn't. Ditto, Kuznetsov and Ovechkin and Backstrom and Williams.

The latest edition of our weekly look at individual Washington Capitals ups and downs.

When is a Hit Worth a Quarter of a Goal?

Capital Ups and Downs: Week 1 When is a Hit Worth a Quarter of a Goal?

The skill of the offensive player keeps the defense honest, and that necessity of honesty is what lets the other forwards get a little naughty. As the defender closes the gap on the puckhandler, suddenly the outlet winger has more room and calls for the puck. He gets it, and the whole defense shifts as fast as they can the other way towards him. But this puck is still moving, and before the defense can even react, it's now gone a third way, where the blue liner who nobody was keeping an eye on only has to make one little side-step and fire a slap shot that beats the goalie high.

This is real life, by-the-moment hockey, and it is exactly why two of your top four Capitals points scorers are defensemen through four games. Gone are the days when overmatched Caps forwards would receive a pass in the neutral zone and stand there, mouth agape, looking desperately for a savior in the form of an outlet pass in order to advance the puck. This year the gawking will be done by fans, at highlight reels.

And with that, we turn to the segment that emits more noxious particulates than a Volkswagen clean diesel... LIABLE TO LIBEL: A BAKER'S DOZEN LIES ABOUT THIS WEEK'S OPPONENTS!

2. Despite his diminutive size, phenom Johnny Gaudreau is able to store his extra talent in his vowels.

3. T.J. Brodie is absolutely not the Bizarro-world sworn enemy of T.J. Oshie so don't even ask or he will bid you hello - uh, he means, goodbye.

5. Vancouver Canucks goalie Ryan Miller is an unflappable American hero, and is only playing for a Canadian team in order to work the proverbial "long con."

7. Yannick Weber and Jannik Hansen are actually the same player whose name was fed into an anagram generator to fill an empty roster spot.

8. Forward Radim Vrbata loves to corner rookies and ask them, "What's Vrbata?" before snatching his hand away and yelling "Nothing, what's Vrbata with you!" and cackling to the delight of no one.

10. Five thousand people came to Connor McDavid's last practice, and though he only had five signed pucks and two commemorative bobbleheads, there was enough memorabilia, miraculously, for all.

12. Like a nose, the Oilers roster is proof that being picked first does not make you glamorous.

So there you have it, hockey fans. With no division rivals on the slate, this is a fairly low-risk week for the Caps. But points is points, as my pappy always said, and if this team keeps building chemistry, we could have a real Bunsen burner on our hands. Have a good week, and as always, Go Caps.