A look ahead at what the week has in store for the Caps, from new contributor Jason Rogers

We are thoroughly excited to introduce one of our new writers, Jason Rogers, to the site! You may have seen Jason's work featured over at PuckBuddys and elsewhere, or just kicking around on Twitter (@HeyJayJRogers), and now he's bringing his unique talents to the Rink, where he will be providing (among other things) previews of upcoming games. So without further ado, here's Jason...

Good morning, Washington, D.C., friendly surrounding environs, and sworn enemies! Hockey is back, the sun has not yet imploded in on itself with the unfathomable force of a trillion atom bombs, and life, surely, is good.

After Saturday's 5-3 win over the New Jersey Devils, the Washington Capitals are officially undefeated, standing alone atop the mount like an itty bitty Moses. This week is the first full week of regular season action, with the Capitals hosting the San Jose Sharks on Tuesday, the Chicago Blackhawks on Thursday, and the Carolina Hurricanes on Saturday. If the Caps want to emerge from this week-long house party unscathed, they'll need to scotch-guard their upholstery and play to their strengths.

The Capitals' power play, like a frightening Tesla coil misunderstood by a turn-of-the-century audience, has the potential to dazzle, destroy, and really buzz. At one point during a five-on-three advantage against the Devils, the Caps' four forwards were Messrs.  Alex Ovechkin , T.J. Oshie, Justin Williams and Evgeny Kuznetsov. These Four Horsemen of A-puck-alypse, these equestrian leviathans, would be the envy of any team in the league. And guess what, Caps fans? They're ours, all ours.

Of course, the Capitals are no strangers to power play prowess. But while before, the Ovicentric solar system revolved around a stationary Ovechkin posted up like Atlas above the left circle, now there are other titans to be reckoned with. 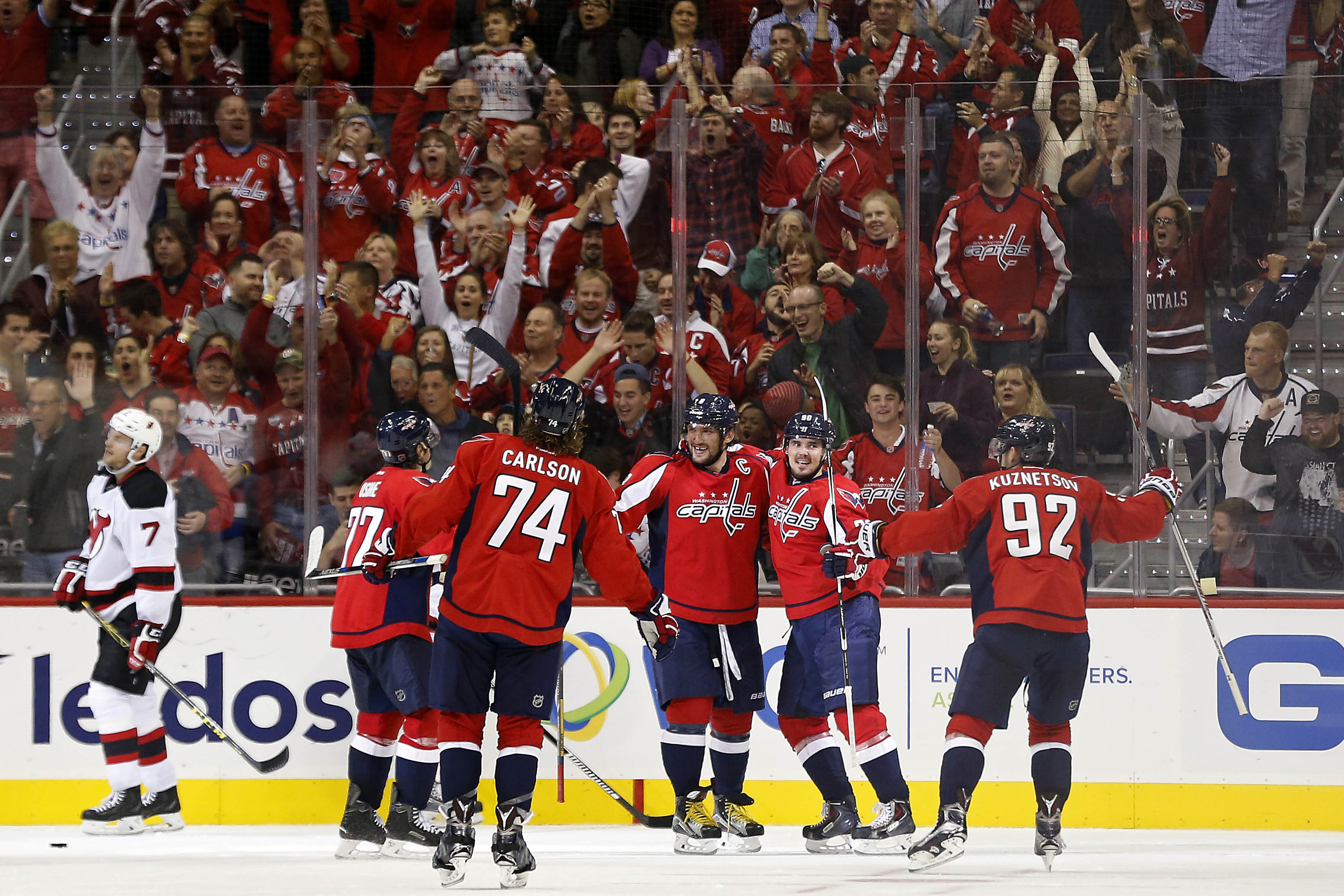 Against New Jersey, Evgeny Kuznetsov lurked along the goal line, spending more time down low than any Russian since the crew of the Red October. Normally, this position on the power play is relegated to time-killing, space-filling duty, essentially doing little more than forcing the defense to shift towards the puck carrier, and hopefully in so doing, creating some space for the player to find someone who can actually score from where they are. Not Kuznetsov, though. No, Kuzy is going to take the space you give him and wreck your tidy little plan, like hiring Jackson Pollock to decorate your living room. He is skilled enough to score from sharp angles, tight spaces, and with little time. Give him a few games to run the calculus, and he will figure out how to score from there.

On an opposite limb of the same whomping tree is T.J. Oshie, consummate American hero and descendant of the first Mack truck. Oshie's modus operandi is the same as that of a rhinoceros: overpower your opponent until the horn tells you you've won. T.J. roars into the zone, bringing defenders with him, and sets up. If he doesn't like what he sees, he either: a) cuts back the other way with the shocking slipperiness of an electric eel, or b) asks the defender if he's feeling lucky, punk. Option B involves lowering his shoulder, getting low in his skating stance, and delivering the sort of proactive hits that would impress a cartel don. Oshie, like a friction vector in a physics problem, is a force to be reckoned with.

With Kuznetsov threatening from beneath the goal line, Oshie doing damage in a more conventional, Jurassic sense, and Ovechkin still lurking in the circle as ever, this Capitals powerplay has the potential to be a thunderous juggernaut of might and righteousness.

WHO'S DEFENSIVE? I'M NOT BEING DEFENSIVE

If the late Johnnie Cochran taught us anything, it's that a good defense forgives all sins. The same, obviously, goes for hockey. This Capitals season hinges upon the efforts of the two players who could be considered the very first and very last defensemen on the roster: John Carlson and Dmitry Orlov.

I love John Carlson. From the moment he scored the overtime gold medal game-winner against Canada in the 2010 World Junior Championships, I've preached from the mulleted pulpit. The only Capitals jersey I have is a John Carlson jersey, for God's sake. He has all the offensive abilities of Mike Green, plus - get this - he can play defense. And he's American. If you're not swooning, you're not paying close enough attention.

But here's the thing: Johnny looked awful against New Jersey. He looked rusty in the same way a Pennsylvania truss bridge looks rusty. Multiple times defending the rush he was caught flat-footed, faltering, and flailing. The pace of the NHL regular season is unlike anything else in hockey, so he can be forgiven for needing a game or two to get back up to speed. But last season, when Carlson was beat or caught watching, he had a nasty habit of sticking out the toe of his stick and Little Bo Peep-ing the puck carrier back into reach. This, of course, is a penalty, and is not allowed. If Carlson can get up to speed quickly and keep his feet moving, he can be the top-pair defenseman and power play prognosticator the Capitals need.

On the other end of the food chain is Dmitry Orlov, the presumptive last man in on the Caps' blueline. Orlov has been plagued with injury like Pharaoh tripping over locusts. This year is his time to put up or shut up. He has good puckhandling skills, as evidenced by his presence on the second powerplay unit against the Devils. Trotz likes Orlov's big slapper, and I loved how Dima danced along the blueline while playing the point. The most important thing a defenseman can do on the powerplay is hold the zone; keep the puck in front of the blueline at all costs and keep the pressure on. Mike Green was just awful at this. Orlov, at least on Saturday, looked fairly competent.

The Capitals will need both players to pull their weight this season if this Radio Flyer wagon is going to start rolling downhill.

And with that dazzling analysis complete, we now turn to the segment that Pope Francis encouraged a joint session of Congress to ban... LIABLE TO LIBEL: A BAKER'S DOZEN LIES ABOUT THIS WEEK'S OPPONENTS

1. San Jose's Joe Thornton, like many misunderstood giants throughout history, really wants nothing more than slightly higher ceilings in government buildings and to be invited to the annual Harvest Festival just once without having to come down from the hillside by himself.

3. Joel Ward, upon moving to the west coast, changed his nickname from the "Big Cheese" to the "Artisinal Barrel-Aged Gouda With Capers."

4. San Jose plays second fiddle to NO "nicer" cities in the bay area. It does, however, play like fourth or fifth viola.

5. Jonathan Toews of the Chicago Blackhawks is actually a baseball fan and grew up idolizing his favorite center fielder Willie Moews.

7. When the Minotaur confronts you deep within the labyrinth, he asks you to pronounce Teuvo Teräväinen's name.

8. Artem Anisimov does not expect you to talk, Mr. Bond; he expects you to die.

9. Patrick Kane seems to be a swell guy.

10. Carolina defenseman Michál Jordan is not that one, so oh my gosh, please stop asking him.

11. Between periods, Eric and Jordan Staal touch their Canes and Penguins Stanley Cup rings together to take the form of an animal and some type of ice, which is then fed into the Zamboni.

12. If you rearrange the letters in the name Cam Ward, it spells Warm Cad (this one's true).

13. Raleigh is a true hot bed of hockey, just like El Paso and Truth Or Consequences, New Mexico.

And there you have it, hockey fans! The beautiful game is back in the nation's capital, and the season is officially in full swing. So hug your loved ones close, talk some trash to everyone else, and be glad that something sports-related has come into your life to take your mind off the Nationals.

Have a good week, and Go Caps!