Washington is doing a better job controlling top opposition this year than last, but still has room for improvement.

Share All sharing options for: Examining the 2014-15 Capitals, Power-Versus-Power

Among many laments last summer, we noted the struggles the Capitals' best players had in handling top competition. The top line was in the red against every level of opposition, from first line to fourth. And while the off-season's two major free-agency signings improved the team's blueline, the two new rearguards either didn't have a history of playing top opposition, or did, but with cringeworthy results in 2013-14. 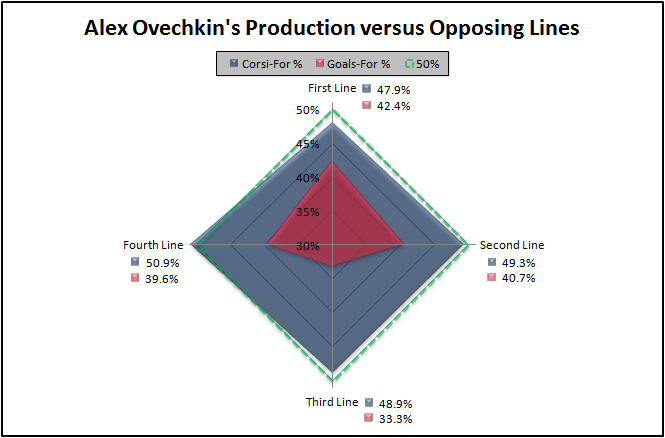 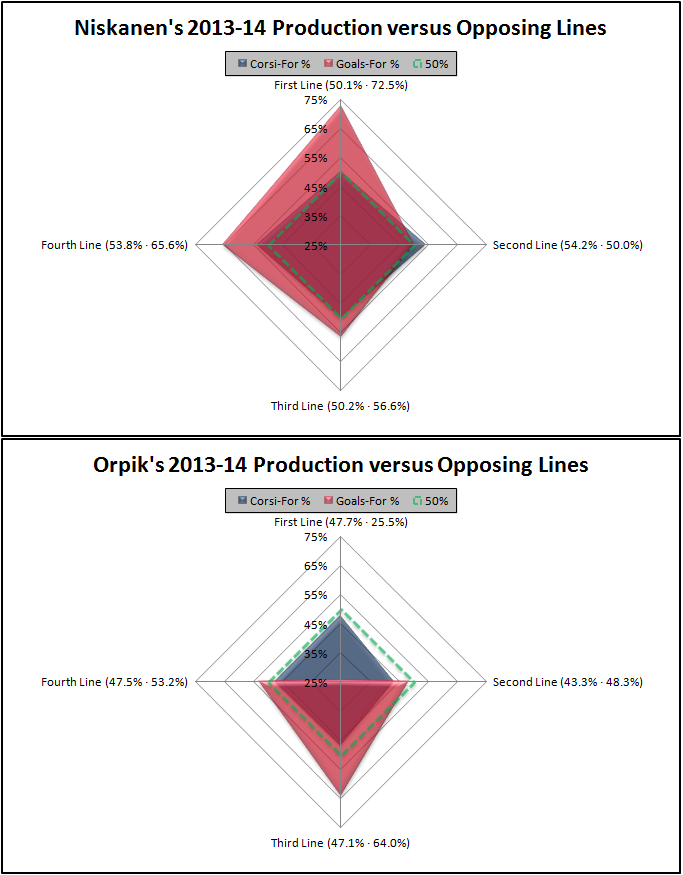 Other than Matt Niskanen’s PDO-driven goals-for percentage, it's not a pretty picture.

This year, though, the team looks much stronger, and a big reason why is the improved ability of its top players to control the puck against the opponent's top players.

Let's first take a look at how Barry Trotz is deploying his players:

Alex Ovechkin and Nicklas Backstrom may not seem like they're being matched to top players, but, to date, they've seen both top opponent forwards and defensemen more than their teammates ... and have gotten decent-to-great results:

(I’m identifying lines differently for this post than previous ones—see the note on methodology at the bottom for more information.)

They aren't dominating like Patrice Bergeron or Anze Kopitar, but if they can keep breaking even at worst, they'll be a viable option to go against anybody — something which they're already having to do on the road:

That flexibility can only be a good thing.

At home, though, while Ovechkin and Backstrom are far from sheltered, it's been some combination Eric Fehr, Brooks Laich and Joel Ward s that Barry Trotz has tasked with taking on the opposition's best forwards:

This new line of Fehr, Laich, and Ward looks like it can handle top competition as well, but not quite as effectively (more on that in a moment).

It is worth noting that the team also doesn't play Ovechkin as much when it's protecting a lead — part of the reason they're below-average in that situation, but well above average otherwise. If Washington only has two lines that can face top opposition and come out ahead, cutting back on the minutes of one of those lines when leading seems unlikely to improve the team's chances of winning in the short-term.

Regardless, the Capitals do have at least two lines that have performed well against top opposition so far, enabling them to shelter rookies Evgeny Kuznetsov and Andre Burakovsky (and their frequent wings when deployed at center, Troy Brouwer and Marcus Johansson), who have done well when facing lower lines:

They aren't destroying top lines, but assuming Corsi is a good reflection of the work they’ve done so far, they are doing better than the other pairs on the team in that situation (the low goals-for percentage notwithstanding — it's being driven mostly by a low on-ice shooting percentage, not a low on-ice save percentage):

If the plan was to use Orpik-Carlson against the opponent's best to free up the other two pairs to do some damage, then so far, so good. That’s a good plan even if Orpik and Carlson need Backstrom and Ovechkin — the second scoring line (with Johansson and Brouwer) has been dangerous when supported by Mike Green, the Fehr line seems to be able to hold its own, and the fourth should be fine with support from either Green or Niskanen in the few minutes it plays each night.

Orpik, though, plays quite a bit against second, third, and fourth lines, too — he's the team leader in even-strength ice time per game, after all — and has been hurting the team in those minutes (again, assuming his below-average Corsi-for percentage is a better reflection of his play than his superb goals-for percentage). Reducing his minutes in those situations might help the team overall. (Then again, that extra ice time would probably be taken up largely by Green's pair, and Trotz has said that he thinks Green’s reduced minutes allow him to be better when he does play.)

Ultimately, there is a lot to like about this year’s version of the Capitals. They have the personnel and systems to break even (or do much better) in every situation, a big reason why they rank ninth in goals-for percentage and 10th in score-adjusted Corsi at five-on-five so far. If the players are deployed a little more optimally, Braden Holtby maintains his excellent recent form (and if past performance is a good indicator, he can), and the special teams continue to be a net positive, Washington could be poised for a deep playoff run.

Note on methodology: Last year's charts sorted players into different lines based on their league-wide 5-on-5 ice time ranking—the top 30 centers were first-liners, the next 30 second-liners, and so on. This time around, lines are determined by faceoff quantity in each game—the team's top option for a faceoff in a game is the No. 1 center for that game, and so on. Neither method is perfect, but this one appears to reflect intended usage a little better.