[Note: Thanks to Muneeb Alam, Andy Hom, and also to Corey Sznajder, who is (was?) manually tracking all 1230 NHL games from last season. Read more about Corey here and help fund his work here. ]

It's a reasonably well-accepted truth that the Washington Capitals get the most out of Alex Ovechkin when he skates alongside Nicklas Backstrom (be it on the right or left), and Caps bench boss Barry Trotz has already stated that he sees the two as an inseperable (for now) pair that will start the season on the top line. Marcus Johansson has served on Ovechkin's opposite wing for the greater part of the last two seasons as the third member of that trio, but that seems likely to change as Johansson continues auditioning for the second- (or third?) line center slot, and it's unclear just how comfortable Trotz would be having both wings on a line playing on their off-hand sides. So with Ovechkin's return to the left side likely spelling the end of Johansson's tenure on the top line, who should get the coveted gig riding shotgun with one of the League's top duos? Eric Fehr.

The Caps' top line is not likely to do a great job of suppressing opponents shot attempts by virtue of its defense, but that's okay. What is important is the overall puck possession battle. Eric Fehr has been the Capitals' best possession forward over the last two seasons, due in no small part to his ability to generate shots. Over the last two seasons Ovechkin is the only Capital that has generated shot attempts more efficiently (iCorsi/60) than Fehr. Over that same time span, Ovechkin accounted for 39.6% of the Corsi attempts and 48.6% of the goals the Capitals generated when he was on the ice at five-on-five. While those numbers are neither good nor bad, they do reflect a line dynamic (a combination of both personal and system) that relied too heavily on one player for offense. Fehr would add another scoring look to a top line that already boasts one of the top offensive duos in the NHL. Below is a graph of CF/20 for an individual player with and without Fehr over the last two seasons (all players have a minimum of 100 minutes with Fehr).

Ovechkin only spent six percent of his 5v5 ice time over the last two seasons with Fehr, but they produced shot attempts at a very high rate when they were together. The decrease in CF/20 experienced by Backstrom is likely due more to the lack of Ovechkin than the addition of Fehr.

Using the same principles that were involved in looking at neutral zone scores for defensemen, we can try to gauge how Eric Fehr played in the neutral zone. To give a look at the team as a whole; defensemen are included.

To see how Fehr compares to the other forwards click on the "Pos" column header twice.

Fehr had the second best NZ score relative among the team's forwards. The Capitals did allow a lot of controlled entries when Fehr was on the ice but, in spite of that, he had strong NZ numbers primarily due to the high percentage of entries-for the team while he was on the ice. Troy Brouwer, another candidate for the first line right wing position, played almost as well as Fehr in the neutral zone (and the opposition had a lower Control% against Brouwer than Fehr). Zone exit data (provided by Corey Sznajder) may provide some insight as to what Fehr does, if anything, defensively that leads to a higher volume of entries for.

While the value of these stats is still pretty unknown, they do not seem out of line with current thinking. For example: Ovechkin, who is often maligned for his defensive play, has trouble exiting the defensive zone. Fehr sets himself apart from the other players vying to play top line RW (especially Brouwer) in these stats. Fehr's high percentages of successful exits (49.8%) and possession (45.6%), coupled with his low turnover percentage (5.0%), indicate that he is doing something right in the defensive end. 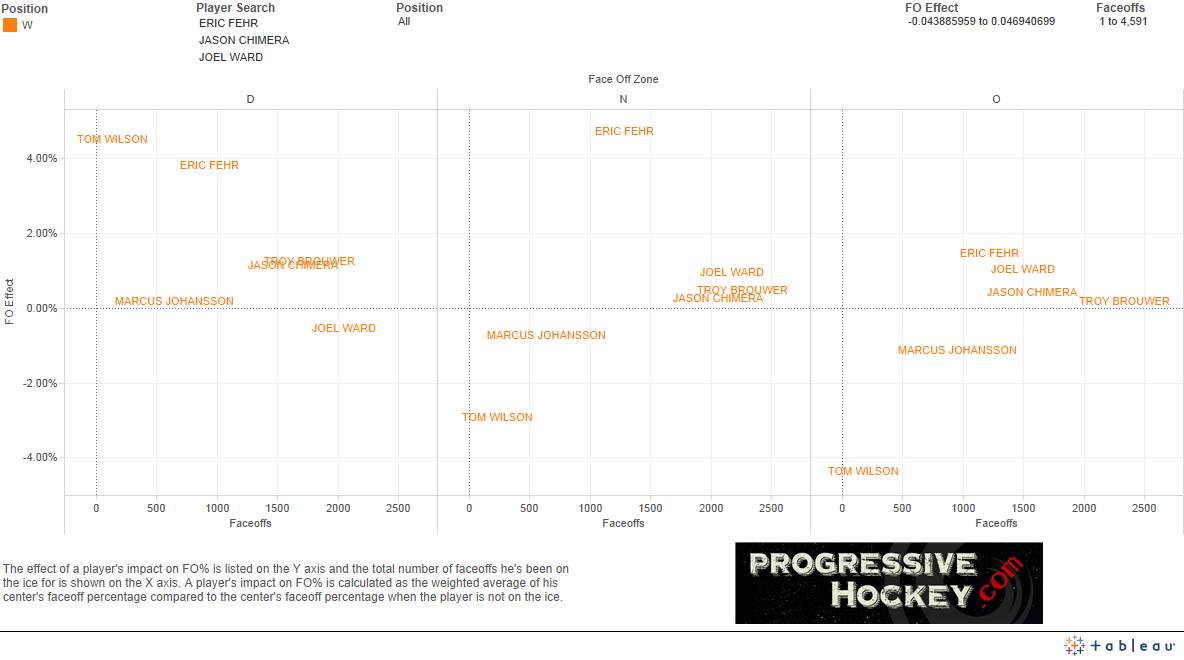 And if you're wondering how this specific trio of former first-rounders has performed in the past, Progressive Hockey has you covered (spoiler alert: the answer is "very well" in limited minutes; click to enlarge):

After Sunday night's win in Montreal, Trotz praised his newly constructed first line, saying, "I thought Eric Fehr did a really good job with Backy and Ovi today," and that instant success should come as no surprise - Eric Fehr is a good puck possession player because he excels at the things that lead to puck possession: he generates shots, performs well in the neutral zone, shows competence in his own end, and might even have an effect on faceoffs. Not to mention Fehr ranks third in five-a-side goal rate, fifth in point rate and sixth in assist rate among players who have been with the Caps over the last two seasons. Other players may work on the top line, but If the goal is to get the most out of the top trio (and it should be noted that maximizing the top line doesn't necessarily maximize the top-six or top-nine), the spot on the right side should be Fehr's.