Share All sharing options for: Wings and Face-off Win Percentages

Ask any coach or player whether a center's face-off win percentage is truly an individual stat and you're likely to get an answer similar to one that draw deity Patrice Bergeron gave in explaining his team's success in the dot during the 2013 Stanley Cup Finals:

"It is definitely something we take a lot of pride in," Bergeron said. "We talk about it a lot and we have some very good centermen. It is not just about the four centers on the ice. It is about everybody chipping in and helping and winning those battles."

"As wingers we got to help the centermen by getting better jumps and win those loose pucks," Nyquist said. "Sometimes the centermen are doing a great job tying things up but the wingers can’t get to the loose puck. That’s a full-line effort."

You get the point, and it's one that should perhaps be of particular interest to the Caps right now as Barry Trotz tries to settle on a second-line center, acknowledging that faceoffs are going to be key in deciding the battle: "It’s a huge part of the game. It’s puck possession, it’s all that." (Well, not necessarily, but that's neither here nor there for the moment. For some quick thoughts on the matter, click here.)

Trotz obviously has the option of having a winger take the second line's key draws (guys like Troy Brouwer or Brooks Laich come to mind), but he should also be aware that not all of his wings are created equal in terms of helping the team gain those critical possessions.

Over at Progressive Hockey, they've taken a look at how teams do in the dot with and without certain players to try to isolate the impact individuals have on those draws. Here's how the tables look for the Caps' stable of wingers over their respective careers (with some samples being larger than others, obviously, and Alex Ovechkin showing up as both Alex and Alexander due to the data listing him as the latter during the early part of his career; click to enlarge): 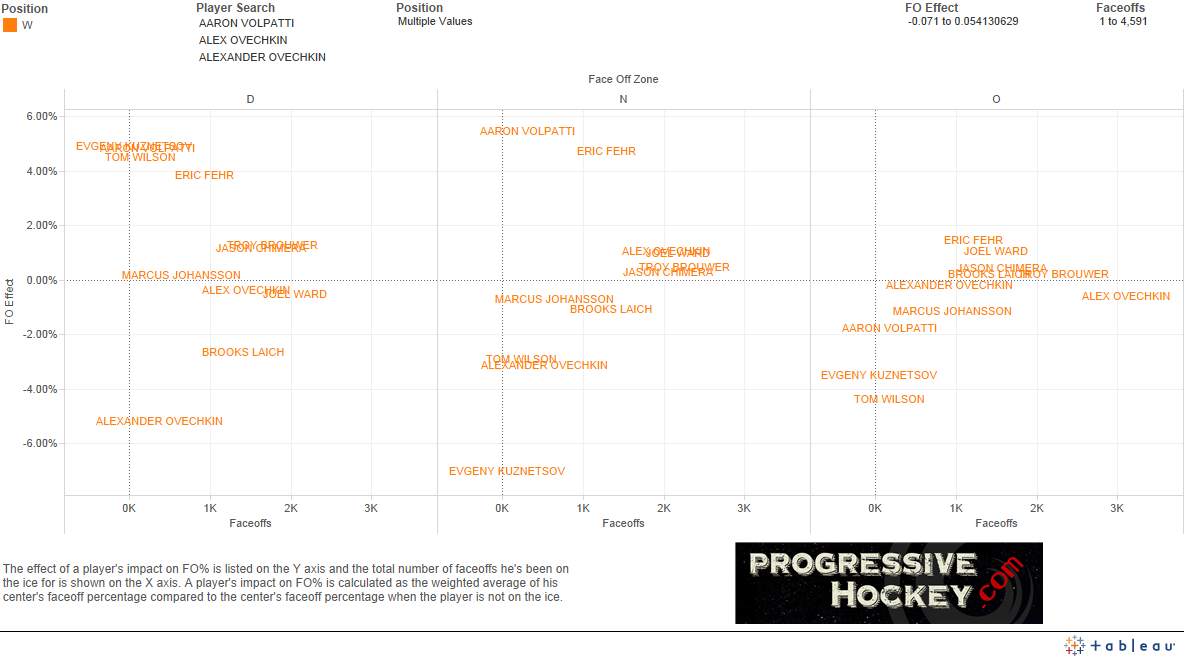 Aaron Volpatti's small samples (310 or fewer draws in each zone) aside, the one guy who jumps out a bit here is Eric Fehr who, in well over 2,000 neutral- and defensive-zone faceoffs has had a positive effect on his center's face-off percentage to the tune of over four percent (which is most likely percentage points, but, well, you know).

Overall, these impacts are small, in terms of rates and raw numbers (an increase of five percentage points is one more win for every 20 draws). As Progressive Hockey noted, "The majority of players with a large enough sample size have had less then a 1% affect on their center's faceoff percentage, but the success of players like Corey Perry and the failures of Ryan Callahan suggest some players can affect it in a marginal way." It looks like Eric Fehr could have a similar impact, and that might be worth considering when assembling a second-line for which faceoffs are already a concern.

Because you're curious, here's what the defense looks like: 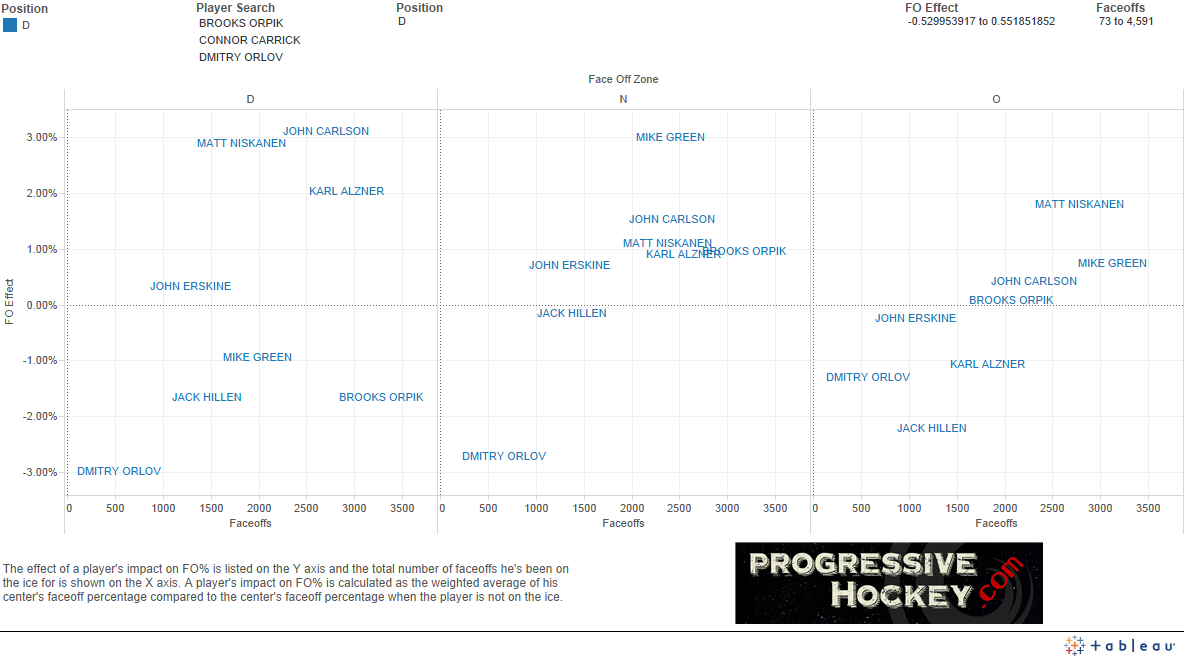 Worth considering, perhaps, on defensive-zone deployments.