That Time When the Capitals' Old Jerseys Were New

Share All sharing options for: That Time When the Capitals' Old Jerseys Were New

With the Caps set to unveil their Winter Classic uniforms in an hour or so, how about a brief look back at early Caps sweaters? As the team detailed when they unveiled the current unis back in 2007:

The Washington Capitals made their NHL debut during the 1974-75 season with an all-American inspired red, white and blue color scheme. The Capitals sported white jerseys with red shoulders for home games and wore red jerseys with white shoulders on the road. The chest of the jerseys was adorned with the word "Washington," spelled in all capital letters, and the team’s logo, a simple yet distinguished Capitals wordmark that featured a hockey stick in the place of the "t." Stars lined the upper torso region and the sleeves of the jersey. The bottom of the jerseys was striped with a red, white and blue piping.

Simple enough. Too simple? Perhaps. Here's Glenn Dreyfuss's take (with links added) from his book The Legends of Landover:

The Capitals in 1974 adopted a "crew cut" mentality for their debut logo. No style, flair, or even originality. Two years earlier, the WHA’s Philly Blazers introduced one quite similar. Any opportunity to create a dynamic logo was sacrificed on the altar of corporate branding. Remember, the Landover arena and its two sports tenants shared the same owner.

The NBA Bullets already used a text-based logo, all lower case, in a custom font colored blue. The Capital Centre logo copied all four of those design elements. So the new hockey design, unfortunately, was predestined to look like its siblings.

Yet the wordmark also sported a crew cut’s positives: clean, crisp, neat, the words and art fitting together like jigsaw pieces. Stylistic heavy lifting on the uniform was carried by the stars, stripes, and shoulder color, so maybe the no-nonsense logo made sense.

In any case, the logo on the ‘70’s Caps sweaters was superior to the alterations made for the 1980’s through 1995. It's relevant to remember that in the early ‘70’s, the Orioles removed "Baltimore" from their jerseys – a play for the hearts (and dollars) of the baseball-starved D.C. metropolitan area. 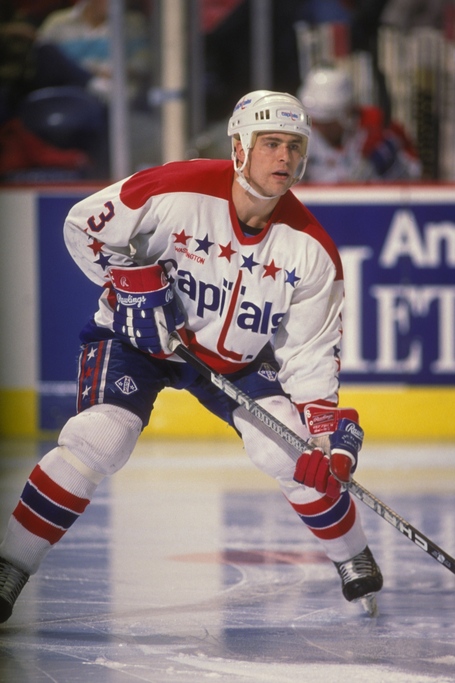 The Capitals apparently felt that what worked for one Maryland-based sports franchise would surely work for another. So, hoping to tap into – oh, I don’t know, hockey-crazy Towson and Ellicott City? – the Caps used a shrink ray on the word "Washington." Beginning in the 1980-81 season, the city name became microscopic. It would have made more aesthetic sense to completely remove it – no one could read it anyway.

Check out – if you can find it – the name of the city on [Scott Stevens'] sweater [as compared to the "Washington" on Yvon Labre's in the in the lead image]. What’s worse, the minuscule lettering wouldn't stay put. On some Capitals uniforms, it hugged close to the nickname. On others, it floated all the way above the top of the hockey stick. Yuck.

It’s only fair to report that the original 1970’s Capitals sweaters had their own issue. Namely, names. The first season started without names on either home or road uniforms. According to capsjerseys.com, home whites finally got nameplates in January, 1975.

Since then, the Caps wore out those red, white and blue get-ups, went through the blue, black and bronze era, then returned to the more appropriate color scheme they've had since the start of the 2007-08 season. And now, in a matter of minutes, they'll add a new uniform to the collection. Time to update this video...