Those Times When the Capitals Trickled Down to the White House

Share All sharing options for: Those Times When the Capitals Trickled Down to the White House

By most accounts, the tradition of presidents hosting sports teams at the White House dates back to an invitation that Andrew Johnson extended to the Brooklyn Atlantics back in 1865. Over the next century and change, the practice of bringing amateur and professional teams in for photo ops and congratulations grew, and the tradition of inviting major championship winning clubs to the nation's most famous home was cemented in Americana by Ronald Reagan, himself a former athlete, of course.

So, um, how did the local hockey club get face time with The Gipper? And how did they do it twice? We'll turn it over to Glenn Dreyfuss to tell the tale, from his book The Legends of Landover: 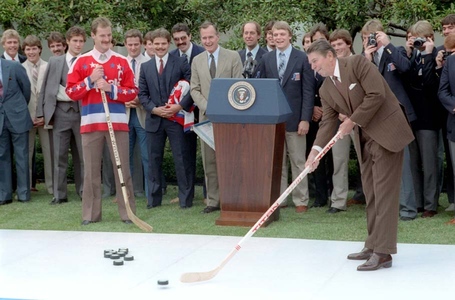 Via the Ronald Reagan Presidential Library

Capitals players and the U.S. Olympic hockey team promoted their exhibition game with a visit to the Rose Garden in Sept., 1983.

Rod Langway is at the far left of the photo, with teammates Bob Carpenter, Dave Christian, Mike Gartner, and Ken Houston.

After shooting a real puck into a net, Reagan declared, "You will never see me hit another puck again." Like all politicians, he was lying. To the surprise of the press corps, Reagan shot a foam puck at the assembled crowd of reporters.

In September, 1987, the scene was repeated on the White House lawn, with the Capitals and the ’88 U.S. Olympians. This time, Langway has smartly positioned himself safely behind the President (far right of the photo [at the top of the post].)

Reagan took aim at Pete Peeters, dressed in his Caps sweater. As reported in the Hutchinson News, "Twice, Peeters easily batted the President's shots away.

"Then, as the goalie focused on a puck lined up ahead of him, Reagan reached in his suit pocket and dropped a second puck in front of the goal and fired it in." Congress later held ethics hearings on "Hidden Puck-Gate." Or maybe it was Iran-Contra, it’s hard to remember.

Of note, when Langway and the Caps met President Reagan in 1983, the Caps' captain gave the Commander-in-Chief a Caps jersey and a puck which read "The puck stops here in '83 and '84." Coincidentally enough, the puck did stop in Washington that year - Al Jensen and Pat Riggin won the Jennings Trophy by allowing the fewest goals in the League.

A few months after that second trip to the Rose Garden, it was the First Lady's turn to try to get one past Peeters in an appearance at Capital Centre as part of the "Just Say No To Drugs" campaign:

And those weren't the only links between the 40th president and the Caps. Back to Dreyfuss for these gems:

When former Caps goalie Bernie Wolfe picked up the phone one day in 1988, he never could have imagined it was the White House calling.

"President Reagan had seen a poster with my mask at the Calgary Olympics, and had been impressed," Wolfe told lapresse.ca. "The chief of staff wanted the poster for the White House. They invited me for a meal, but the president wasn’t there."

For a short time in the ’86-’87 season, the Caps formed a makeshift trio of Jim Thompson, Bob Gould, and Dave Christian. Since all three were natural right wingers, they became known as the "Reagan" Line.

Ken Duberstein, chief of staff in the final months of the Ronald Reagan administration, also was a Capitals season ticket holder. ''In the sense that hockey is a rousing, enthusiastic sport, it's a good metaphor for Ken,'' said Marlin Fitzwater, White House spokesman.

Duberstein received a presidential memento related to his favorite team. Seems there was a picture taken of the champion Islanders presenting Reagan with a goalie stick. As Duberstein explained in a New York Times piece he penned, "Reagan autographed a photograph of that incident in 1982 to me with the inscription, 'next year, the Caps.'''

(Sidebar: if you haven't bought Glenn's book by now, you're doing it wrong.)

At this point, it's probably worth wondering whether there's a curse involved in visiting the White House before winning the Cup (much like touching the trophy prior to earning it). It's also very much worth dreaming about when the Caps might next visit the building.