Share All sharing options for: The Metropolitan Division's Top 10 Centers: 2014-15

With the 2014-15 regular season less than a month away, it's time once again to take a look at the Metropolitan Division's top-ten players by position. First up? The centers...

After being traded to the Hurricanes two years ago in a blockbuster, draft-day trade with Pittsburgh, Jordan Staal has struggled to find his footing with his no-longer-new team. His per-game production has dipped in each of the last two seasons, and he has yet to hit the 20-goal mark as a Hurricane... something he did four of his six seasons with the Penguins. He did start to find his stride when moved to a line with Jiri Tlusty and former Cap Alexander Semin late last season, however, and shrugged off a slow start to the year with 13 points in his last 19 games. Heading into the third year of that huge ten-year contract he signed shortly after arriving in Raleigh, Staal will be looking to show that he can carry the responsibility he wasn't given back in Pittsburgh.

The past twelve months have been event-filled for Grabovski, who a little over a year ago turned a very public and bitter buyout from the Leafs into new life with the Caps, then parlayed a solid season into a long-term deal with a Metropolitan rival in the Islanders. Caps fans are familiar with his skillset, and his 35 points was the sixth-most among Washington forwards despite missing 24 games with injury (although that probably says a lot more about the team than it does about him). Those missed games were a big part of Grabovski's story in 2013-14, as he was never quite able to live up to what he could have been with the Caps - and when he was healthy, he dealt with questionable usage by Adam Oates.

That said, he still had a pretty good season with the Caps, finding some consistent production when slotted between Jason Chimera and Joel Ward, and picked up the bulk of his points at even strength (albeit against pretty weak competition), an area of overall weakness for the team. Whether he will be able to build on that in New York - and stay healthy enough to do so - is really the only question mark for Grabovski, as he heads to his third team in three years.

After holding out prior to the 2013-14 season and getting off to a slow start to the season, Stepan gradually did what he's done in each of his four years with the Rangers - provided a steady, consistent presence up the middle. While his points-, goals- and assists-per-game rates all dropped from last years superb (and lockout-shortened) season, he did set new career-highs in assists and points in 2013-14; he also added 15 points in 24 playoff games en route to the Rangers' trip to the Stanley Cup Final, despite sustaining a broken jaw in the Conference Final against Montreal. He's probably never going to hit the upper-echelons of goal-scorers and point-producers like a Crosby or a Backstrom, and the jury's still out on whether he's a #1 center, but there's no question that he's among the best the Division has to offer.

After a quiet start to his NHL career, Johansen stepped into his third full season with the Blue Jackets and gave new meaning to the term "breakout season". The 22-year-old demolished his previous career-high totals in almost every category, leading Columbus with 33 goals (T-11th in the NHL) and 63 points en route to the franchise's second visit to the postseason (where he picked up six points in six games). Whether his newfound success is sustainable has yet to be determined - his three NHL seasons are too small a sample, and too varied across the board, to decide whether 2013-14 was a fluke or the new normal, and a lofty shooting percentage of 13.9 underlines that question mark surrounding his sustainability. Add in the fact that the restricted free agent is still looking for a new contract, and there's a lot of uncertainty surrounding this young talent.

Since posting 100 points back in his Cup-winning 2005-06 campaign, Staal has seen his production steadily decline over the years, barely cracking 80 points just once since (and that back in 2007-08). That said, he's still among the upper ranks of NHLers when it comes to scoring, and his 61 points in 2013-14 led the 'Canes... something he's done in all but four of his ten seasons with Carolina. Anchored a bit by a career-low shooting percentage and a supporting cast that hasn't been as offensively potent as some thought they would be (as evidenced by the fact that 61 points does check in atop the heap), Staal still managed to register his 8th 20-goal season, one of just 14 NHLers to have at least that many over the past ten seasons.

Giroux got off to what was, for him, a ridiculously slow start to the 2013-14 season, with just three points in his team's 1-7 skid to kick off the year, just six points (all assists) in the opening month and no goals until November 9... which makes the way he finished out the year that much more impressive. Once December rolled around, Giroux caught on fire, racking up 68 points in the remaining 58 games to finish third in the NHL behind Crosby and Ryan Getzlaf and helping his team return to the playoff picture after a year on the outside looking in. It's taken him a few more years to get there than some of the others drafted around him, but over the last three years or so Giroux has turned himself into one of the League's elite centers.

Appearing in every game of the season for the second-straight year, Backstrom very quietly put up 79 points alongside his Richard Trophy-winning captain (and tying him in that department), with an assist total of 61 that put him squarely in third, behind Crosby and Joe Thornton. Both of those numbers were Backstrom's best in each category since the stellar 2009-10 season - totals he reached while facing tough competition, a byproduct of centering Alex Ovechkin. That he finished the season with a career-worst minus-20 was the product of, among other things, a ridiculously potent power play and an on-ice shooting % that was (hopefully) unsustainably low.

Where Backstrom's strength lies is in his consistency, almost exactly a point-per-game player over the course of his career. And while he's already among the franchise leaders in points, he'll head into this season six points shy of 500 for his career - and if he hits it this year, he'll be just the eighth player in Caps history to do so, and just the third player to do so before turning 28.

An injury suffered at the Olympics in February put an end to Tavares' first season as the Islanders' captain, and kept him from fully replicating what he'd done a season earlier - but that doesn't mean what he managed to do up to that point wasn't pretty great. In fact, his points-per-game pace was actually higher than the one he set in his Hart-finalist season of 2012-13, ranking fourth in the League behind only Crosby, Malkin and Ryan Getzlaf; he also managed to finish in the League's top-30 in scoring overall despite missing 23 games. The question with Tavares going forward will be whether that knee injury has slowed him down at all... and whether he'll be able to take an improved supporting cast and move them to the next step.

You have to be good to have what is generally seen as an "off' year and still check in among the League's top-20 scorers. You have to be even better to do that in a year in which you miss 22 games. This just in: Malkin is really good at this hockey thing. Despite some injuries in recent years and some lulls in production, Malkin's points-per-game pace is second-best in the NHL since 2005-06... trailing only the guy ahead of him on this list, as well, Sidney Crosby. Playing on the same team as Crosby does allow Malkin to get away from opponents' top defensive pairs and shutdown trios, something that's probably worked to his advantage at times, but there's no question that he is inherently dangerous every time he has the puck on his stick.

The fact that Crosby's 104-point season was just his fourth-highest total in a career spanning nine seasons tells you all you need to know about the impressively-high level at which he's able to perform; the fact that it was the first time he led the League in that department since 2006-07, a reminder that he hasn't had too many full seasons with which to work. This year he came close, though, playing in all but two games. He made each of the 80 count, racking up a League-leading 68 assists and, perhaps more surprisingly, scoring 36 goals, sixth-most in the NHL.. all while facing the toughest competition of anyone on this list. It may have been a while since we've seen what a healthy Sidney Crosby can do, but it really is something pretty special to watch.

Below, a quick look at how each of the players on this list were used in the 2013-14 season, via the new-and-awesome war-on-ice.com: 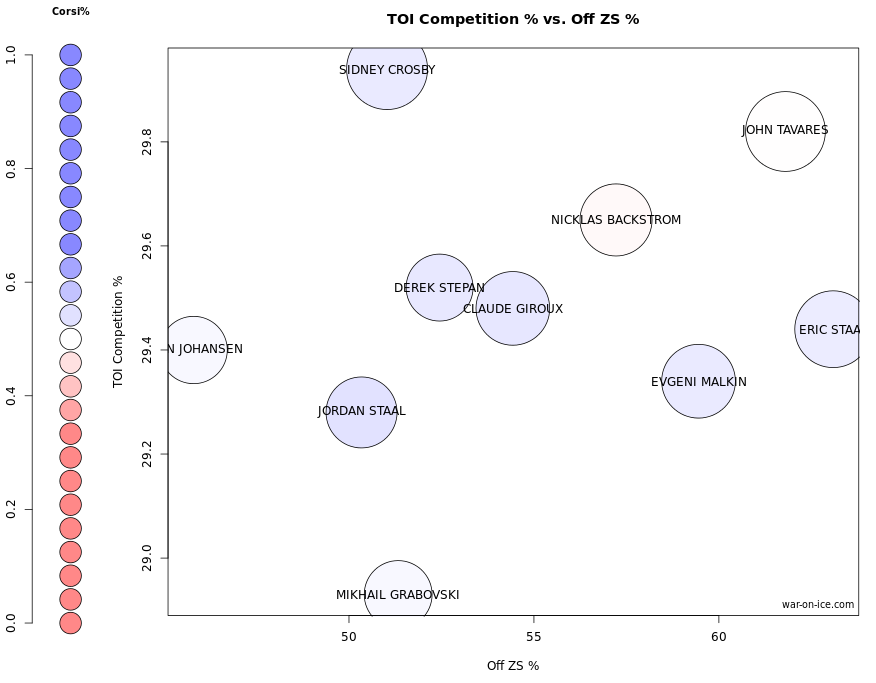