On the relationship between a parent club and its affiliates, next summer's free agents, lower-body injuries, hamburgers and more in this week's edition of "you ask, we answer."

Our first question comes via email:

My question is, What do you think the relationship should be between AHL and NHL affiliations should be, And I’ll use the Caps as an example during Ovi’s tenure.

With Hanlon- We were still in Portland, It seemed that both teams were horrible but when we had guys called up they looked lost.

With Boudreau/Hershey. Both teams played the same style and were winning, But were players getting developed, and was Team Success the first priority?

Hunter/Oates. Was a mess on both sides.

So my question to you, How do the GM’s for both squads approach this new relationship.

The Hershey Bears are the premiere club in the AHL. They're the oldest (continuously operating) franchise in the League (1938), have won the most titles (11) and have drawn the most fans for eight-straight years (9,664 per game last season), and their relationship with the Caps over the past nine seasons has been a good one for both teams. As Hershey GM Doug Yingst put it back in May when the two teams renewed their affiliation, "The success of the Hershey Bears as the AHL affiliate of the Washington Capitals has been unmatched for nearly a decade. The affiliation makes perfect sense geographically and logistically, and we are excited to work together again to produce two quality teams for our fans."

To that end, I'd pulled together this chart after last season which shows pretty clearly the intertwined fortunes of the two teams, as they rose and fell:

The rise and fall of hope (at an organizational level) in one quick chart. #Caps #HBH pic.twitter.com/MiYBoJbKGf

Depressing, and it hints at some of those issues over the past few seasons, but perhaps more to the fact that the Caps haven't supplied the Bears with a ton of talent in recent years, as they did in those first handful. Then again, Hershey, by virtue of their status and expectations, probably prioritizes winning over developing players for their parent club in a way that few if any other AHL teams do. When new Bears bench boss Troy Mann was introduced last month, he said, "I know what's the expectation here. It's to raise the banner. That's the only thing the fan base accepts. We know what's at stake in terms of what we want to put on the ice." (I didn't see anything about his thoughts on preparing players for the next level.)

All of that said, and to get back to the question, the relationship between the two clubs and their coaches was a major point of emphasis at last month's Development Camp, including implementing a 48-hour rule to insure the lines of communication are open and used (making Trotz the anti-Torts, which can be nothing but a good thing). And, per Tim Leone, "[b]oth coaches said Hershey and Washington will run similar systems, mirroring each other with room for the Bears to adjust based on personnel."

That last part will be key and will be a change from the past few seasons to something more akin to what was going on in the Boudreau years. With a bit of an influx in drafted talent and the two organizations presumably reading off the same sheet of music, hopefully both clubs can get back to where they were not so long ago.

@JapersRink What would be a realistic contract for the Caps to re-sign Mike Green to, if he decides not to test UFA?

@JapersRink Holtby will be an RFA next season, based on his career now, if he maintains pre-last season avgs what do you think he will get?

Already looking at next year's free agents, are we?

With the 28-year-old a year away from unrestricted free agency, the Capitals face an extremely important decision.

On the Mike Green front, Muneeb addressed this earlier in the week, setting the ceiling at Kris Letang (eight years, $58 million) and the floor at Matt Niskanen (seven years, $40.25 million). (And if you don't want to do the math, that's a range of $5.75m to $7.25m annually.) Those are fair numbers on a yearly basis, but unless Green can show that he can stay relatively healthy in 2014-15, I'd be reluctant to give him the type of term that Letang and Niskanen got (though there's obviously a trade-off between dollars and years here). I'd also want to see how Barry Trotz plans to use him - Mike Green with a restrictor plate on isn't worth as much as Mike Green who's allowed to do what he does best. But a good, healthy season from Green (say, 70 games played, 45-plus points and good underlying stats) and he'd be well worth a big investment.

As to Braden Holtby, I think I've mentioned it before, but I loathe paying goalies big bucks, no matter how much I like them (and I like Holtby). Rob pretty much nailed it here:

For every truly elite goalie who might be worth a Henrik Lundqvist-like investment, how many Cam Wards or Marc-Andre Fleurys are there? Here are the top-20 goalie cap hits for 2014-15: 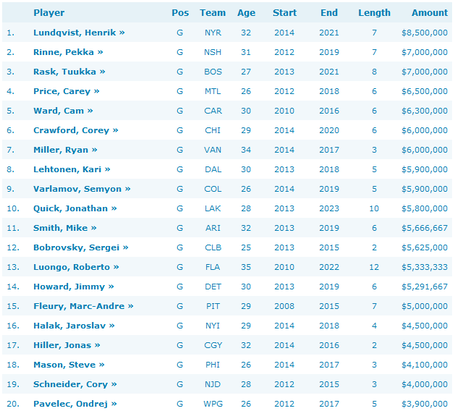 How far down the list do you have to go before you get into guys who aren't worth either their cap hit or term, especially when compared to a list of arguably the best 'tenders over the past three seasons? Point being (in addition to what Rob said above), unless you've got an elite goalie, you probably don't know what you have, really, so it's best not to go all-in on the guy... which brings us back to Holtby.

"If he maintains pre-last season avgs" is a heck of a caveat (even though I don't think last season was nearly as bad as some people make it out to be, and there are some pretty easy ways to explain away much of the negative aspects of it). But over the seven seasons that preceded 2013-14, there were only two goalies in the League who played 2,500 minutes at five on five and had a better 5v5 save percentage (generally regarded as the best available measure of a goalie's true talent) than Holtby - Lundqvist and Tuukka Rask. That would put Holtby in pretty darn elite company. So if Trotz and Mitch Korn can get similar numbers from Holtby in 2014-15 while the goalie is carrying a number one's workload... yeah, you're probably going to have to pay that man his money (with a discount for the remaining RFA portion of his service time). That would be one of those nice problems to have, I suppose.

It sure does seem like it, doesn't it? Obviously Brooks Laich and Mike Green have had their fair share of groin-related issues over the past couple of years, and guys like Tom Poti and Chris Clark have seen their careers end or come close to it as a result of groin injuries. Semyon Varlamov and Tomas Vokoun both had groin issues while in D.C., and so did Shaone Morrisonn. Joel Ward, too. You get the point.

While that sounds like a lot of man-area maladies, groin injuries are incredibly prevalent in hockey, so without points of comparison (and with the NHL's "upper/lower body" injury disclosure policy), it's hard to say whether or not the Caps have had more than the average team. And on a related point, we haven't heard of Caps players blaming their groin injuries on the ice at Verizon Center (or calling it the worst in the League) in years, so... progress?

@JapersRink With the @BizNasty2point0 to @washcaps rumors swirling around, who do you think is the best UFA the Caps could sign for $1M?

@JapersRink fans calling for another UFA signing. Should #Caps do it? Or time to let current players/prospects step in? #JapersMailbag

@JapersRink Have we seen the last of the Caps move this summer? IOW, any chance they get a legit 2nd line center before camp opens?

I'm not sure how "swirling" those Bissonnette rumors are, but in terms of guys who could potentially help the Caps where they need it and could conceivably come in at a price that would be doable, if I had to pick someone, how about taking a chance on Andrei Loktionov? He's coming off shoulder surgery, but is a still-young (24-years-old) center who has shown offensive upside in the past and put up very solid possession numbers over the past two seasons (albeit in sheltered minutes). He's most likely no better than the Caps' current options for middle-six centers, but would add some depth and who knows?

Free agent dumpster-diving aside, I do think that the roster as presently constructed is pretty close to what you'll see on opening night and, barring a significant move, probably a fine course of action at this point.

@JapersRink we're swamped with burger joints in the area. Who likes where? May be best served as a roundtable instead of a mailbag

Finally, the most important question of the week. I put this question to an esteemed panel of Japers' Rink burger enthusiasts and have come up with the following (not limited to "burger joints," just favorite burgers in and around town):

Me: The Prime Angus Truffle Burger at Food Wine and Co. in Bethesda - Prime Angus Beef with pickled & crispy onions, roasted garlic truffle aioli, portobello, local greens and truffle cheese. There's a lot going on, so I dump out of the portobello, but it's simply an otherworldly burger.

Rob: I moved away several years ago and I was really an Arlington denizen more than DC, but Ray's Hell Burger was my jam.

B Sheridan: There is a hole in the wall in Brookeville, Maryland that is by far the best place to get a burger. The building looks like its abandoned but what lies inside is nothing short of a burger paradise. It's called the Sunshine General Store (used to be an old Mobile gas station) that still runs as a general store. In the back they have a grill and handmade 1/2 lb patties that are the friggin' best. Martha Stewart sent one of her minions out there when she was in town in order to get one.

Adam: I'm so lame I have no off the beaten path places to contribute, when I am really craving a burger I usually just go to Five Guys﻿.

Let the debate rage on in the comments...