Most NHL teams not only match lines, but also (to an extent) match zones. That is, at five-on-five, certain players are sent out for more offensive-zone faceoffs than defensive-zone draws, and vice versa. While most teams aren't yet as extreme as the classic example of Vancouver from a few years ago — the Sedin twins started over 70% of their non-neutral shifts in the offensive zone with Manny Malhotra handling much of the D-zone duties — they're slowly progressing in that direction:

Unsurprisingly, there was a big jump in zone start differences after 2009-10 — the season Henrik Sedin, who had better than two offensive zone starts for each defensive zone start, won the Art Ross and Hart Trophies. Vancouver has since fallen back to seventh in zone start ratio range, behind the Blackhawks, Hurricanes, Rangers, Oilers, Coyotes, and Wild last season.

These trains of thought make a lot of sense, but determining the correct strategy for each group of players can be difficult.

Let's take the example of an offensively talented player starting in the offensive zone. 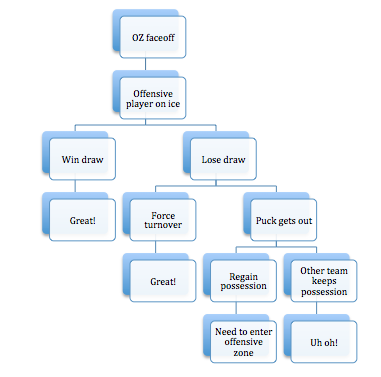 In the words of the Caps' new GM, "hockey is a game of probabilities," and the more an organization can take into account, the better. Nothing is certain. About half the time (give or take), you'll lose that faceoff and have to get the puck back. Some players are very good at that; others, not so much. Regardless, they'll get the puck back sometimes — in which case their offensive ability is once again at the forefront — and the rest of the time, their defense will be tested, with the possibility they'll get another shot at offense. A complete analysis needs to take all of the possibilities into account.

And that's not all. Your best option for an offensive-zone faceoff in a vacuum may not be the best one considering the rest of the roster. If a player is your best option for any faceoff in any zone, but is only the the team leader by a slim margin in the offensive zone while holding a large lead in the defensive zone, that player should be getting defensive zone faceoffs. Comparative advantage matters, too - it's all about maximizing the output from the entire lineup, not just individual players.

Many teams face these types of issues because their best offensive players are also often the best when it comes to neutral zone play (a key part of shot differential), and by starting those players in the offensive zone, a team is not necessarily maximizing on that player's ability to move the puck up the ice under control.

That holds true for the Capitals, as well. Nicklas Backstrom and Alex Ovechkin are terrifyingly good when it comes to entering the offensive zone with possession, as Adam outlined earlier this week. Meanwhile, in the offensive zone, they're good, but not quite as incredible (set play off a clean win aside):

It's worth noting that in such a small sample size, the numbers can be quite random, but do have a significant element of skill, too. (See Notes.) By increasing our window as far back as possible, we see again that Ovechkin and Backstrom are above team average, but not miles ahead:

But if we look at how Caps forwards did after faceoff wins in the other two zones, there's a bit of a surprise:

It's a surprisingly poor showing from Ovechkin in the neutral zone — though playing with the only player who rated worse undoubtedly has something to do with it — but a surprisingly good one in the defensive zone, and an uninspiring one from Brooks Laich, Joel Ward, and Jason Chimera despite their supposed "north-south" mentality and defensive acumen.

But that doesn't mean that starting Ovechkin in the defensive zone is the best strategy, necessarily; the Caps could (and would) still lose plenty of those faceoffs, and following a lost defensive-zone draw over the past two seasons, the only Washington forward with a worse Corsi differential than Ovechkin was Mike Ribeiro.

In order to get an idea of the optimal deployment strategy, we need to take faceoff winning percentage into account. Let's assume a 51% faceoff winning percentage for the first line — roughly Backstrom's four-year average — and 51% for the fourth line as well. The second and third lines are much more difficult to pin down, but if Marcus Johansson is centering the third line, we can use his career 41% in the dot, and perhaps the same for the second-line (which looks like it'll be centered by Evgeny Kuznetsov or Andre Burakovsky, at least in the early going). As for the Corsi differentials, let's use Backstrom's for the top line, Brouwer's for the second, Ward for the third's, and Beagle's for the fourth.

The top line doesn't look like a bad option in any zone, though it's head-and-shoulders above the others after offensive-zone draws. Beyond that, based on past performance, it might be best to keep the fourth line off the ice for neutral-zone faceoffs and the third line on the bench for offensive-zone draws.

It seems simple enough to figure out without going through any complicated analysis. But so do other deployment strategies. Last season, for example, Adam Oates thought it was better to give the top line a minimal defensive load and the fourth line plenty of neutral-zone draws. The reasoning is easy to see: Ovechkin is a poor defensive player, and hence should be starting as close to the other team's net as possible, while the fourth-liners aren't reliable enough at either end of the ice to take key faceoffs. But, in hindsight, it doesn't look like that thinking maximized the Caps' possession numbers.

Beyond zone start deployment, teams can also send players out for faceoffs as often as possible — thereby avoiding shifts that start in the normal run of "open play." To that end, the Caps' top line and third lines had identical ~49% Corsi percentages in "open play," so it may make sense to give Ovechkin and Backstrom heavier faceoff duty while having players like Ward and Chimera take some of the duo's "open play" shifts. Washington can't go to an extreme here — if it did, it would severely be limiting Ovechkin and Backstrom's ice time, and it's worth remembering that they should still expect to best their teammates in goal differential, if for no other reason than they should have higher shooting percentages — but it's possible that the team squeezes out an extra shot here and there by paying close attention, and those extra shots add up.

As far as defensemen are concerned, we get a more interesting picture. Using Mike Green's numbers for the first pairing and John Carlson's for a second duo, and assuming 50% faceoff percentage for both in all three zones:

Contrary to their respective reputations, Green's expected Corsi differential after neutral- and defensive-zone draws slightly bested Carlson's. That might have made it worthwhile to give Green (and frequent partner Dmitry Orlov) more defensive- and neutral-zone starts— after all, by the numbers, they looked like the two best defensemen on the team with the puck on their sticks in the defensive and neutral zones.

Swapping Green's zone starts with Carlson's could have improved Washington's Corsi by about 15 events, all else equal, which translates into roughly 3/4 of a goal. (The actual effect could be smaller because we need to account for randomness, although by how much depends on how many faceoffs of each type Green and Carlson are on-ice for.)

The team also could decide that Green is better served in "open play" as opposed to starting shifts with a faceoff. Green had a 51.1% open play Corsi percentage, second-best on the blueline to Orlov — and together, the two came in at over 55%, which is excellent. Carlson clocked in at 48.1%. If Orlov and Green stay together and maintain those excellent numbers, they'd be worth a goal over Carlson in open play for roughly every 15% of his open-play minutes they take (assuming quality of competition and teammates differences are negligible). That's about 90 seconds a game — and remember that both Green and Carlson will be partly spelled by Matt Niskanen, whose strengths will need to be taken into account as well.

The differences by themselves aren't big, but they start adding up. If a team can find and fix a handful of minor issues of similar magnitude — starting players in different zones, or giving certain players preference for on-the-fly shifts over those starting with a faceoff, and so on — it could easily add up to a point or two in the standings. (That's roughly the equivalent of spending $2-3 million in free agency.) And for a team on the playoff bubble, a single win could be the difference between missing and making the playoffs.

An easy way to estimate the amount of randomess in the two years of data I used is to compile the same numbers for 2007-09 and 2009-11 and compare (using linear regression).

This means that there's almost certainly a real skill in driving shot differential after faceoffs — no surprise — but, across these players, 75% or more of the deviation from league average in the two-year sample is randomness. (For a reference point, this is a little more random than three-year on-ice shooting percentage.) For some players it may be more, and for others, less, but our best guess for future performance is past performance multiplied by the slope for that type of faceoff, which can change depending on where we set the cutoff.