That Time When the Caps Played Musical Goalies

Share All sharing options for: That Time When the Caps Played Musical Goalies

If the Washington Capitals of the 1970s were some of the worst teams in NHL history, the 1970s Montreal Canadiens were among the League's best. Six of the franchise's Stanley Cups, and eight of their top-ten point totals, were captured during that decade; their roster boasted the likes of Guy Lafleur, Larry Robinson, and Ken Dryden, with Scotty Bowman calling the shots from behind the bench. They were a juggernaut.

They were also one of the Caps' first division rivals.

The chasm between the Caps and the Canadiens was a wide one, with Montreal frequently dominating in lopsided affairs. Between their first meeting in October of 1974 and the end of the 1979-80 season, the two teams met 37 times, the Caps winning just once - in February of 1980 - and tying three more times. They were outscored by Montreal 202-61 over that span, five times giving up double-digit goal totals, and were shut out 11 times.

There arguably was no better Montreal team, however, than the 1976-77 Canadiens. They finished that season with 132 points (a franchise high and League record), 60 wins and just eight losses, and 387 goals to the 171 they gave up - a far cry from their Norris Division rivals in D.C., who set their own franchise record, legitimately overachieving to a whopping 24 wins (and still managed to lose 42 games).

Needless to say, while the 1976-77 Caps had improved over their first two seasons in the League, they were hardly a match for that particular Canadiens squad - and their first meeting of the season series followed a script similar to the dozen head-to-head battles that had come before, with the Habs downing the Caps 6-0 in Washington.

So for their second meeting, Coach Tom McVie decided to try something a little bit different. Prior to the early January game at the Forum, McVie informed his goaltenders, Ron Low and Bernie Wolfe, that he would be rotating them in and out of the game throughout the evening. After all, said McVie, forcing anyone to face the Habs for a full 60 minutes "[j]ust takes too much out of a goaltender." 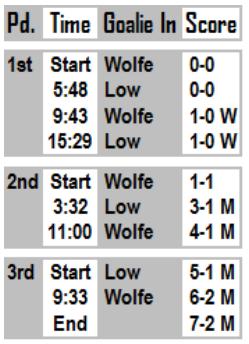 Official goalie rotation (via The Legends of Landover, by Glenn Dreyfuss)

The somewhat unorthodox plan actually worked out... for a little while. Wolfe got the start, playing just under six minutes before being spelled by Low for five, then back to Wolfe, then Low finishing out the period. The two combined for nine saves on ten shots, with the two teams tied at one after the first.

After that, however, the wheels started to come off. Montreal scored four more times in the second (three in the first 6:40) and added two more goals in the third, the Caps getting one more goal of their own en route to a 7-2 finish. By the end, Wolfe had given up four goals on 26 shots in 35 minutes of work; Low (no stranger to tough times in Washington) played 25 minutes and gave up three.

And what had the goalies thought of this, um, unique rotation? "I stopped thinking if I was going to be hot or cold," said Wolfe. " You're going to be doing it so you just better be hot when you go in." Low echoed the implied sentiment about finding any sort of rhythm, and said of the strategy, "I can't really go against (McVie), because everything he does is for the best, so I'll go along with him." Ringing endorsement.

I can't really go against him... so I'll go along with him. -Ron Low

The tactic didn't result in a win, of course, but it did at least save both goaltenders from having to face a firing squad all game - so McVie tried a modified version when the Caps returned to Montreal a few weeks later, this time with Wolfe playing the first forty minutes and Low getting third-period duties. The score was slightly closer this time around, Montreal rolling to a 5-2 finish.

So, innovative? Yes. Effective? Not so much. But hey, back then you took what you could get.