Japers' Rink Mailbag: The Fourth Line, The Bird and More

Taking a closer look at the bottom-three, Winter Classic angst, how many goals an average Joe might give up and more in this week's edition of "you ask, we answer."

Share All sharing options for: Japers' Rink Mailbag: The Fourth Line, The Bird and More

So our pal Dave Lozo said something on Twitter that ended up inspiring a question via email (which we'll let Rob answer):

How bad will the Caps fourth line be in the upcoming season? Shouldn't we expect it to at least improve? How much will new systems under Trotz help that line? As well as by changing some of its personnel: in lieu of Volpatti maybe Bissonnette, but more likely the younger guys, such as Latta and Brown, down at Hershey. - capsyoungguns

There's a lot to unpack here, so let's take it piece by piece. For starters, almost by definition fourth lines are bad across the league. It's not a make or break aspect of the team, so the general answer is "pretty bad, and it won't matter a whole lot." Whether or not it will improve has two components: coaching and personnel.

The coaching has been much more substantially upgraded than the personnel, so insofar as the fourth line improves, it'll likely be due to Barry Trotz and the new coaching staff, and the systems they utilize at even strength. It's impossible to know how much that will improve the team at this point, but you'd expect the fourth line to improve relatively in line with rest of the team (that is to say that the fourth line will improve if the top three lines also improve) because the team will be playing better all around. There's no reason to think that Trotz can't get more out of this team than Adam Oates did (understatement of the century), so I'd expect some upgrade just from the coaching.

As for personnel, since there hasn't been room made for him on a higher line, let's pencil Tom Wilson in at right wing on that fourth line. With that out of the way, I don't think Bissonette would be a meaningful upgrade on Volpatti. To the extent that Bissonette looks like an upgrade, see the prior paragraph. Both guys have NHL roster spots because of one, niche skill set, and it doesn't have to do with playing the puck (Bissonnette is the better and more feared fighter, and to the extent that that would take some of the perceived burden to chuck knuclkes off of Wilson's shoulders, that would be a plus). Would Brown be an upgrade over Volpatti on the left side? Probably - he has some promise as a crash-and-bang type player and, well, Volpatti doesn't.

In the middle, Latta could conceivably provide a skosh more offense than Beagle (who couldn't?) and brings some fiestiness that Beagle lacks, but given the ice time, those marginal improvements are unlikely to matter much. Beagle may be the better defensive center of the two (though Latta actually got more shorthanded time per game and won a higher percentage of his face-offs), played defense well, took draws, and killed penalties. One interesting note here, though, is that Trotz has had Latta in several training camps over the years with Nashville, and yet traded him away (granted, the return was an offer no one could refuse) and hasn't said much (anything?) about him since arriving in D.C. Maybe Latta isn't a Trotz guy.

@JapersRink Any update on the location of the Winter Classic? If not, any change of heart on where is should be? #JapersMailbag

No update, and don't worry - the last time they played one of these in a baseball stadium, the announcement wasn't made until September 26. And since (we think) we know that it's going to be at a baseball stadium... patience (and don't overthink it, as tempting as it might be).

Oh, and in case you had any questions as to which baseball stadium it might be, Ted Leonsis eliminated one option last week when he blogged, "the Caps will play on New Year's Day here in DC against the Chicago Blackhawks." (Emphasis added)

@JapersRink do you think we'll see similar offensive production from Ovi or will some of the load be picked up elsewhere? #JapersMailbag

The two aren't mutually exclusive, are they?

Muneeb and Adam took a stab at projecting Alex Ovechkin's point totals a couple of weeks back and figured him for somewhere in the (large) neighborhood of 75-90 points, so yeah similar production (though fewer goals and more assists, most likely). But secondary scoring will be hugely important (we're looking at you, Evgeny Kuznetsov), especially as guys like Troy Brouwer and Joel Ward - who hit career highs in goals last year while shooting above their career shot percentages - likely experience at least some regression.

Here's the thing, though - the 2014-15 Caps won't need to score as many goals as last year's club did to win games. Thanks to better defense and coaching, even if Ovechkin slips a bit and so on, the team could very well improve its goal differential. And that, after all, is what it's all about.

@JapersRink which Caps player is most likely to get caught on camera giving the opposing bench the finger during national broadcast game? 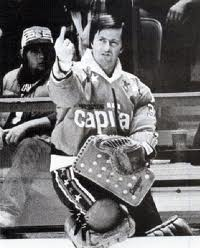 (Of guys on the current squad, I'll go with Jason Chimera.)

Erskine - he won't be playing as much as RGIII.

This one, and it's not close:

Man, if that doesn't take you back. (And yes, this one makes me feel a lot of feelings as well.)

Finally, one more (long one) via email:

How many goals would I allow in an NHL game?

I am a man in my 40s, in good shape (which is to say bad shape for a pro athlete), average size (which is to say small for an NHL goalie) and I've skated all my life, and played hockey in college a bit and occasionally, recreationally, after college. Winger by trade (a shitty one, too). Played goalie in roller/ball hockey, that's it.

Here's the set-up: An average NHL team (say, the Washington Capitals) decides to let me tend the net in a regular season game against another average team (I dunno...Minnesota?). I have a day or so to get ready, that is, I don't go on some amazing strength/conditioning regimen. Both teams know what's going on--my guys know I'm going to be a horror show, and the other team knows to shoot from any angle.

How many goals do I give up?

I figure I can get in the way of at least half. I've been around hockey enough to know where the puck would come from, what an impending shot looks like, etc. But after that? not sure. Could I stop 60%? 70%? And, I assume, because I'd be giving up rebounds like Allen Bester, there'd more more shots on goal, and more penalties taken by my guys, leading to more shots on goal in a man advantage situation. So, say 45 SOG for the game? 50? And I stop close to 2/3rds through some combination of dumb luck and decent positioning, and maybe one or two snags of a Boyd Gordon style slapshot.

So what's that: 15 goals allowed? More? Fewer? Could there be any way that, like the Bruins with Plimpton in net, my guys work their asses off and I only allow 9? I think of Manon Rheaume giving up 2 in a period against the Blues in an exhibition game--I'm bigger and taller than she is, for god's sake. but I also think about Mike Fratello, then in his late 30s as the coach of the Atlanta Hawks, being forced to scrimmage with his players in practice when injury depleted his bench and reporting he couldn't even get off a pass, never mind a shot.

I'm genuinely curious, and would like to know what others think--not just what would happen if I went in, but if they did as well (presumably I'm on the older end of the spectrum of Rink regulars). - bilspacecadet

Bad news, Bil - you're gonna get lit up.

The good news is that there are going to be some score effects that kick in at some point, and then sportsmanship will kick in at some point after that. Still, let's take note that Hall of Famer Grant Fuhr gave up a dozen goals in a game not five years removed from his fourth Stanley Cup in five years, so don't count on things easing up too much.

Since the 2004-05 lockout, the worst goals against average of any goalie who played just one game in the League is Martin Houle's 30.00; Houle played two minutes for the 2006-07 Flyers and allowed a goal (on three shots). The highest GAA for a goalie that played at least a period over that span is Joacim Eriksson's 10.00 (six goals on 31 shots in 36 minutes for Vancouver last year). Martin Houle and Joacim Eriksson were drafted by an NHL team (both by the Flyers, interestingly enough). You were not.

Since the start of the 1987-88 season, the worst career save percentage posted by any goalie (minimum the sixty minutes you're getting) is Gregg Naumenko's .759 with the 2000-01 Mighty Ducks of Anaheim. Can you match that? Not likely. I'm going to peg your save percentage ceiling at .625 - you might get in the way of some pucks, but rebounds, deflections, scrums... you're toast.

So here's the bottom line: you're playing 60 minutes, saving at most 62.5% of the shots you're facing, and likely facing between 30 and 40 shots. Best case scenario, you give up 11-15 goals. But I could see it being a lot worse.