That Time When the Caps Brought Hockey to Japan

Share All sharing options for: That Time When the Caps Brought Hockey to Japan

The tale of the Washington Capitals' 1974-75 misery is a well-known one, forged in legend (and the history books) as the worst team to ever play in the NHL. So memorable was that inaugural season for the Caps, that two things are often forgotten - that the Caps' second season wasn't much better, and that they weren't the only awful team to debut in the mid-1970s.

Also borne out of the 1974 NHL expansion, the Kansas City Scouts had the great fortune to debut at the same time as the Caps, thus masking the fact that they were a historically bad hockey team in their own right. After all, if you're only going to get 15 wins in 80 tries... it's best to do so when someone else only gets eight.

Both teams wallowed in the League basement from 1974-1976, the Scouts having the slight edge in wins and overall success. That advantage carried over into their head-to-head battles, with three of Kansas City's 15 wins that first year coming at the Caps' expense; the 1975-76 season saw more of the same, as the Scouts took two of the first three in the season series, the last of which was a 5-1 victory on February 7.

When the Scouts rolled into town for the fourth and final meeting of the season on March 23, 1976, they did so in the throes of a 19-game winless streak, a streak which actually started immediately after that early February win; the Caps, on the other hand, had improved slightly since the last time the two teams had met, picking up four wins (including their ninth of the season, a new franchise-high). Perhaps this was what prompted first-year Caps' coach Tom McVie to make a pregame declaration:

(via The Legends of Landover, by Glenn Dreyfuss)

Bold words, and ones that may have haunted McVie a bit as he watched his team fall behind 4-0 by the second period that night; by the third period, the Caps were down 5-2. But before the Canadian soda truck drivers' union received an influx of new members, the Caps struck back, with Bob Sirois, Blair Stewart and Jack Lynch all picking up goals in a span of 2:18 to tie the game at five, which would be the final score.

It was hardly a clash of the titans, and both teams were well out of the playoff hunt by the time they wrapped up the series; in fact, the Scouts would not win a single game the rest of the season, finishing out the year with seven straight losses for a final record of 12-56-12. But the game did have some meaning - because among the 11,235 in attendance at Capital Center that night were Japanese embassy officials, who had been invited to get a sneak preview of the two teams.

The Caps and Scouts were about to go on the ultimate road trip.

It was no coincidence that the Caps and Scouts were chosen to play a series of exhibition games in Japan that April. Considering the timing, there needed to be a guarantee that the exhibition games wouldn't conflict with a team's playoff schedule.

Needless to say... the Caps and Scouts were free and clear.

A week after the 1975-76 regular season came to a close, the Caps and Scouts (and their wives) arrived in Japan to a heroes' welcome, with banners that read "welcome great great fighters and sweet ladies" as they prepared to play the first-ever NHL hockey in the Land of the Rising Sun. 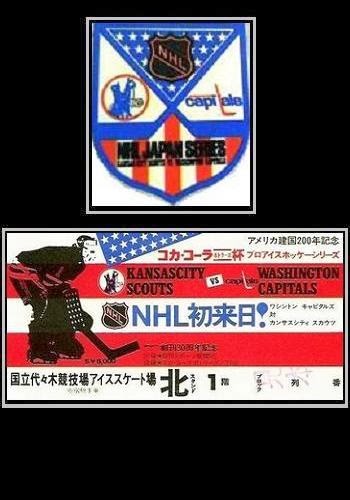 The atmosphere may have been festive and the regular season over, but the games still mattered to some:

"We are going to play as if they were league games. I'm not going to throw away everything I've done and begin taking a half-hearted approach to this game. Maybe this sounds absurd. But I want - and I even expect - four victories over there." -  Tom McVie to The Washington Star, 3/23/76 (via Mike Vogel)

The Caps got their coach the wins he was looking for in the series opener, a set of back-to-back games in Sapporo (home of the 1972 Winter Olympics) on April 14 and 15 in which the Caps outscored the Scouts by a combined score of 11-4.

Not everyone was all that impressed, however. After the first game, a 5-2 victory for the Caps, the Washington Post's John Saar wrote the following:

The first game in the NHL exhibition series the two teams are playing in Japan was an unexceptional, scrambling encounter. It was played in an ice-cold arena before a less-than-capacity crowd of 4,500 that showed a lukewarm reaction. Many Japanese spectators were disappointed by the absence of blood or brawls. Players squared off on two occasions but the gloves never looked like coming off. The fans occupied themselves with sake and noodle soup while waiting for war to break out, and Caps' coach Tom McVie, for one, found the quiet unnerving.

"I miss those Washington supporters," he said.

Of course, if the Japanese fans were upset about the lack of fisticuffs in Game 1, they didn't seem too thrilled by the fighting the second time around. Saar wrote:

The shouts and swinging fists of a third-period fascinated and mystified the fans. "We are not accustomed to seeing the foreigners fighting in public," said a woman, explaining the hush that fell over the arena.

After sweeping the Sapporo games, the Caps and Scouts moved on to Tokyo, where they would play two games at another former Olympic site - this time, at a makeshift rink placed over a swimming pool inside Yoyogi Stadium, a remnant from the 1964 Olympics. Joked Yvon Labre after the game, "Thank God we didn't fall through. It was wet enough on the ice."

The Caps took the Tokyo opener, their second-straight 6-2 victory in front of 9,200 fans; the fourth and final game would be the lone win for Kansas City (snapping an unofficial winless streak of 30 games), as the Scouts topped the Caps by a score of 4-2, but the Caps took the series 3-1 and captured the only championship trophy they've hoisted to date. Feast your eyes upon the illustrious and awe-inspiring... Coca-Cola Bottlers' Cup: 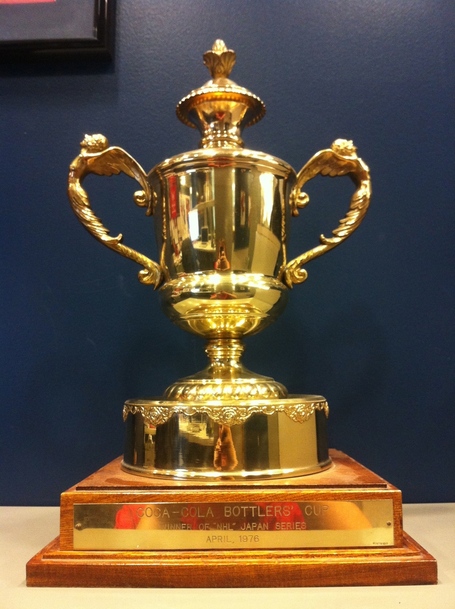 When the NHL's visit to Japan was complete, both teams were treated to a five-day stopover in Hawaii on their way home, much-needed rest and relaxation after what had to have been a very long season - the last for the Scouts in Kansas City, as poor performance on and off the ice led to their brief relocation to Colorado (renamed the Rockies) before settling in as the New Jersey Devils.

And for the Caps, the series win in Japan would be a rare highlight in a season - and a decade - that was notably lacking in that department.

[Ed. note: As always, a huge h/t to Glenn Dreyfuss and his invaluable book, The Legends of Landover, and for more on the Caps' trip to Japan, NHL.com ran a piece a few years back that's worth checking out.]