That Time When Don Cherry and Tom McVie Had Words

Share All sharing options for: That Time When Don Cherry and Tom McVie Had Words

Long before "funny guy and old guy" Don Cherry was criticizing Alex Ovechkin from afar for playing the physical brand of hockey that has characterized his game since day one or having the audacity to display some emotion in the moments after scoring a goal, he was riling up the Caps (and their fans) as head coach of the Boston Bruins.

Following the 18th of those 26 games (a 4-1 Boston win), Cherry "made some deprecating remarks about the Caps and laughed that they were able to get only one shot on goal during the entire first period." The "deprecating remarks"? Here's how Cherry himself remembered it in his book "Hockey Stories and Stuff": 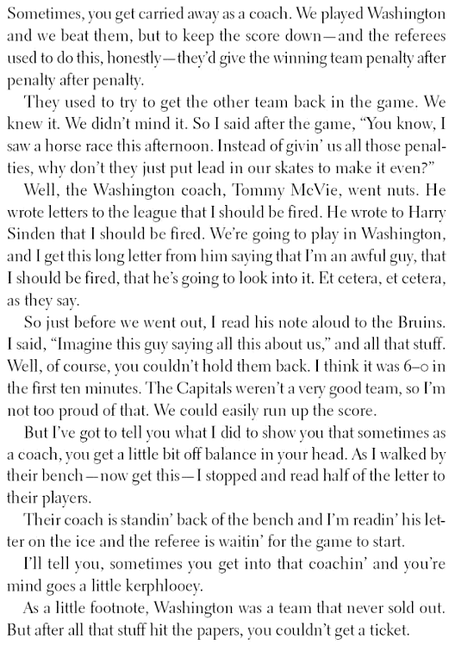 Caps bench boss Tom McVie responded by saying that if Cherry had to coach the Caps, he'd be "selling Cadillacs in Rochester," to which Cherry replied that that option would be preferable to coaching the Caps. (He probably wasn't wrong on that point.)

A week later, the Caps and Bruins played that next game and Boston won 5-2 (a game in which, contrary to Cherry's assertion, the B's never lead 6-0 and one which was, in fact, 3-1 heading into the third period). Cherry, always the gracious victor, noted that the Caps were "three times as good" in that game (because they managed three first period shots on goal), adding, "I'm still laughing" and taking a couple of more direct shots at McVie.

He probably wasn't laughing when, in front of one of the largest crowds in Capital Centre history, "a switchblade was tossed at the Bruins bench" (!) or when he had "one of his expensive suits ruined by a soft drink at the same game." Perhaps that's what led to this, from Glenn Dreyfuss's book The Legends of Landover (on which we're going to lean heavily in this series of posts, by the way): 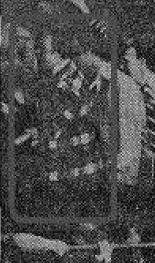 That's the Boston coach in the plaid sportscoat, but what's he doing? Washington Post photog Richard Darcey captures Cherry confronting a heckler at Capital Centre. Yes, Cherry climbed into the stands between periods of a 1978 game.

Cherry continued after McVie, even after the latter was fired just prior to the start of the following season (after training camp, oddly enough, a move which was never really explained). And a few years later, Cherry nearly became the Caps head coach. (Fred Shero, Phil Esposito and Scotty Bowman were also apparently in the mix for the job that eventually went to Bryan Murray.) So why didn't Grapes get the gig?

"[Cherry] had some conditions I was troubled with, or concerned about. He wanted sort of a Billy Martin-type condition here, where he would be in total control. I was concerned about it, for the Washington Capitals at this time. And told him so."

"I'm a people person. I go with what my heart tells me and what my gut tells me. My gut tells me that Bryan Murray's the guy that's gonna bring the Capitals out of their doldrums." - Abe Pollin (Ken Denlinger, Washington Post, 12 November 1981, D2)

And that was the last Caps fans heard from Don Cherry.

Postscript: McVie is currently a West Coast scout with the Bruins, and seems to have gotten the last laugh in this little feud... at least that's how it looks in this picture of McVie posing with a certain trophy.