When will the 19-year-old be ready for the NHL?

Over the past decade or so, the Capitals have found several stars with late first-round picks - Mike Green in 2004, Semyon Varlamov in 2006, John Carlson in 2008, and perhaps Evgeny Kuznetsov in 2010.

After an impressive 2013-14 season for Erie of the OHL, 2013 23rd overall pick Andre Burakovsky may be on his way to joining that group. The 19-year-old finished 15th in the OHL in scoring (albeit only fourth on a stacked Otters team) with 41 goals and 87 points in just 57 games, posting a CHL-high goals-for ratio in the process, and he now seems destined for the AHL this fall. 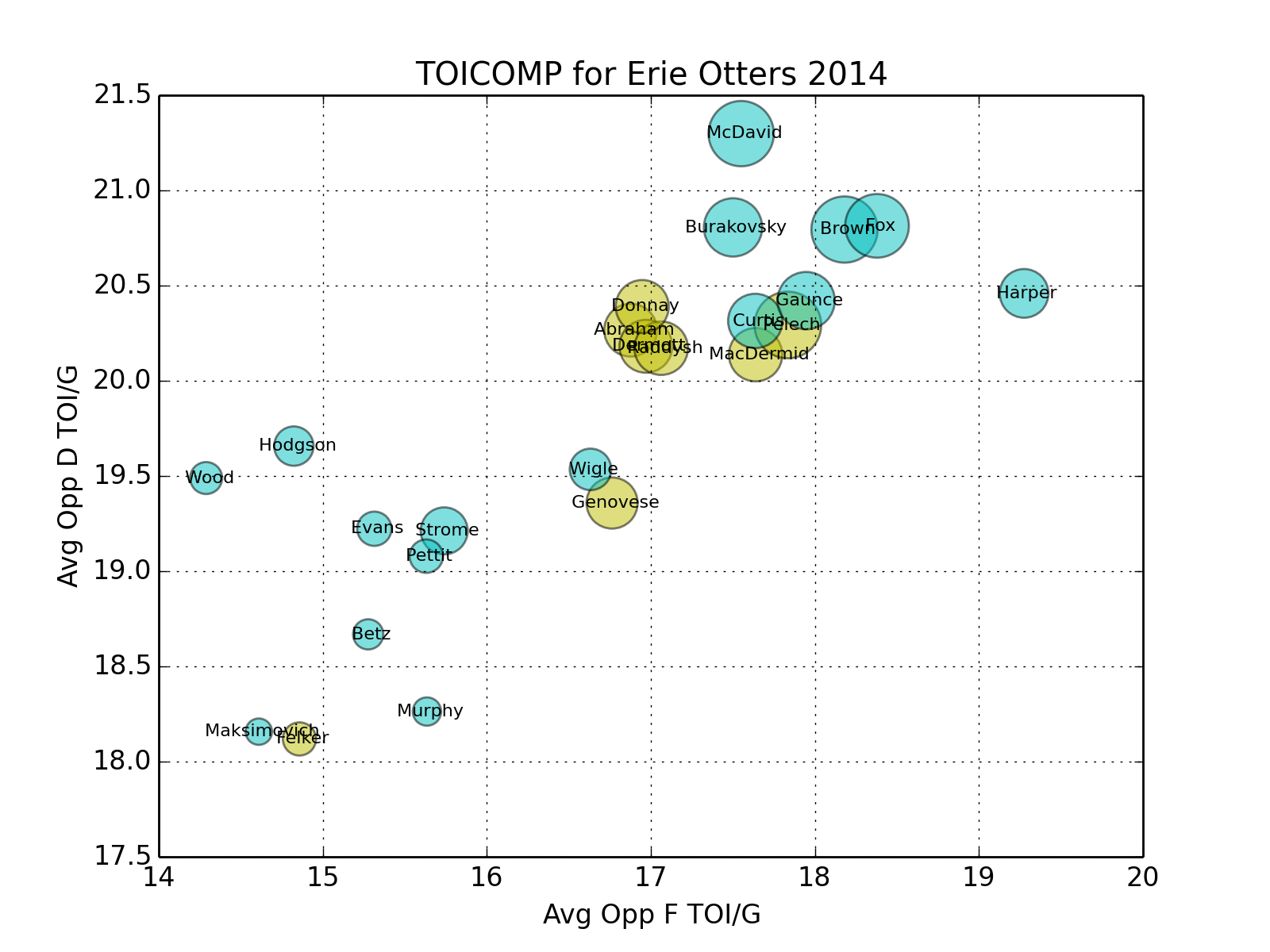 Forwards in blue, defensemen in green, bubble size is estimated TOI/G. Burakovsky didn't headline the Otters — teammates Dane Fox, Connor Brown, and Connor McDavid all finished in the top five in the OHL in scoring — but he was still a key part of Erie's attack.

How soon can we expect him to be an impact player in the NHL?

Andre Burakovsky had a fantastic first season in North America, but is he ready to take the next step in his professional development?

We can try to get an idea by looking at comparables - in this case, not necessarily players who play the game a similar way, but players who were selected in the same part of the draft and who posted similar boxcars.

First, let's look at players drafted around 23rd overall, starting in 2006 (by which time it was clear the clutch-and-grab era was over) and ending in 2011 (so we can have an idea of what the prospects looked like a few years later), limiting the list to players who played their post-draft seasons in major junior:

(Note: David Perron's draft year stats are listed because he was passed over when first eligible, making him a year older than the other players in their respective draft-plus-1 seasons.)

This comparison makes Burakovsky look really good. Only Claude Giroux beat him in goals or points per game. (Worth noting: 2013's Anthony Mantha and Kerby Rychel also beat Burakovsky, but fell after the 2011 cutoff.) This isn't to say that Burakovsky turns into Giroux, but it does imply he could make the NHL sooner and be better than most of the players in this group, which includes six quality NHLers.

Moving up in the draft, Burakovsky doesn't top the list of players drafted in the first half of the first round, but he does fit in.

It's probably fair to assume that most of the players on this list had more raw tools at the same age - after all, they were picked in the top 15 just a year earlier - but it's good to see that despite being less polished, Burakovsky's strengths were strong enough to produce comparable results.

Burakovsky, incidentally, slots next to a particularly encouraging statistical comparable in Peter Mueller. Two months younger at the 2006 entry draft than Burakovsky was at 2013's, Mueller also posted 1.53 points per game in his draft+1, and then proceeded to score 22 goals and 54 points for Arizona in his draft+2. But he appears to be the exception rather than the rule: only Mueller and Jakub Voracek managed to make a notable NHL impact in their draft+2 seasons, and it's hard to expect Burakovsky to join them as exceptions.

In fact, since 2007-08, only 19 forwards have posted 40 or more points in their rookie season (max age: 20), and all were either top-10 picks, or at least 20 years old on opening night — a few months older, and potentially wiser and stronger, than Burakovsky will be. The ones coming out of Canadian major junior, at least, also tended to be more productive in their final junior seasons:

So it looks unlikely that Burakovsky can be expected to contribute significantly to the Capitals this season. It wouldn't be surprising, though, if he's ready in a year or two.

Even three years after the draft, only a third of the top-15 forwards who played their draft-plus-one seasons in major junior had become good NHL players. By four years, it's a little more than half. It's frustrating for impatient fans, but the reality is that it can take four or five years before top prospects develop into quality NHL players (which, incidentally, should bode well for Kuznetsov, a 2010 pick, in 2014-15).

All in all, even if Burakovsky weren't being moved to center, it would be surprising to see him in the top-six in the NHL. He's young, and while he had an excellent 2013-14 season, he didn't quite post jaw-dropping numbers like most of the players who go straight from the CHL into productive roles in the NHL. After all, players who go from the CHL one year into the NHL the next retain under a third of their per-game scoring, on average, although it's a more like a fourth for players who spent post-draft seasons in the CHL — which would give Burakovsky a projected 14 goals and 31 points per 82 games in the NHL, or 27 goals and 56 points per 82 in the AHL.

There are players who surprise, and there's nothing preventing Burakovsky from being one of them. But considering the organization's depth in good-not-great forwards as well as Burakovsky's age, comparables, new position, and contract status — 10 games in the NHL this season will burn the first year of his entry-level deal —  Hershey seems like the likely destination for the next year or two.