We're still talking Niskanen, Orpik and Niskanen/Orpik, as well as prospect development, Tom Wilson's truculence and more in this week's edition of "you ask, we answer."

Another big 'Bag, so let's get to it:

What can the Caps reasonably expect from Niskanen in the upcoming season. Though his PDO was high last season making it likely that he will regress offensively, it appears that he has been a decent possession player for several seasons now. #Japersmailbag - capsyoungguns

Anyone who's going to want to judge Matt Niskanen on point production is almost certainly setting themselves up for disappointment. As you noted, Niskanen has a high PDO last year (103.1) which was driven by a 10.1% on-ice shooting percentage, fourth-highest among NHL defensemen (thanks, Sid!). That's likely to regress to a more sustainable 8% or so, which means fewer points, all else equal (which it isn't, but it would take a huge spike in possession to offset the drop in on-ice shooting percentage). Add to that - or, more precisely, subtract from that - the fact that the he led all blueliners in ice time for the League's top power-play and figures to be further down the extra-man depth chart here in D.C., and he's going to have an awfully difficult time reaching his career-high 46 points from last year.

That said, there's more to hockey than putting up points (which maybe aren't offense, contrary to popular belief), especially for rearguards, and you're right - he's been a terrific possession player for several years. As Rob wrote in the wake of the signing:

Niskanen has been growing as a player, and even before his big season last year, he was already out-performing his team in terms of possession. Further evidence that Niskanen isn't being carried by his teammates, he makes just about everyone he plays with better. Whether you want to look at last season or the last three seasons, the story is the same: teammates put up better possession numbers with Niskanen than without him. He's not going to need to be heavily sheltered, but he clearly can take advantage of those situations.

And this chart (via Tyler Dellow) hammers home that possession point: 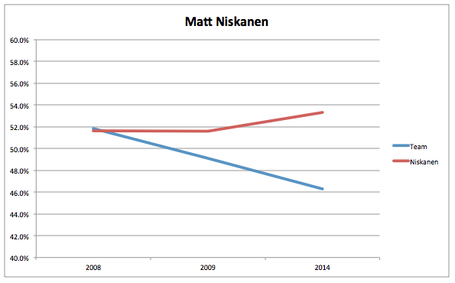 As Niskanen's teams have gotten worse around him, he's gotten better.

So what's reasonable to expect from Niskanen (who's still going to be working with the assistant coach he credits with saving his career)? Let's go with good two-way play, positive possession numbers and somewhere around six or seven goals and 25-30 points.

Next up, a question for Adam:

@JapersRink Are we wrong about Orpik in the same way the Kings fans were wrong about Regehr? http://t.co/i4y8F409Tc #JapersMailBag

I'm not so sure that Kings’ fans think they were wrong about Robyn Regehr... but I guess that is sort of besides that point. The main point of criticism for Brooks Orpik has been his lackluster possession and WOWY numbers, which Muneeb helped put into context last week. Based on the current strength of their defense corps, the Capitals should be able to utilize Orpik in a way that makes him an asset… or at the very least not a detriment. As Muneeb wrote:

[When Orpik has better possession numbers it is] undoubtedly thanks in part to Paul Martin, who is a solid defenseman in his own right, and it could also be partly a function of quirks in competition faced or other transient factors — but I think it also indicates that Orpik is far from bad enough to sink a good partner. Given the Caps' strength down the right side (Green, Matt Niskanen, and Carlson), Orpik should have a Martin-level partner for almost every shift.

Orpik is clearly a serviceable (top-six) NHL defensemen, but problems will likely arise if he is consistently put out against opposing teams’ top forwards on every shift. To get back to your original question, though, Orpik can definitely contribute to this team, and in much the same way Regehr did in L.A. - with relatively tough deployments and lots of time on the penalty kill, and that's not even considering the dreaded "intangibles."

It's hard to say what would constitute Capitals’ fans being "wrong about Orpik," but it's probably going to be important to differentiate between Orpik and Orpik's contract; there's a much better chance that people will be wrong about the former. And if any of Orpik's seasons in Washington end the way Regehr's 2013-14 did in L.A.... I don't think anyone's going to care who was right or wrong.

@JapersRink Should there be concern over the impact Orpik & Niskanen deals will have on future Capital UFA contract negotiations? #mailbag

Having an internal salary structure and sticking to it is important... when it makes sense to. For my money, that's part of the reason the Caps had to let Alexander Semin walk - because how could you justify paying him more than Nicklas Backstrom? (I've gone and stepped in it, haven't I?)

But it's also important to be comparing apples to apples in terms of a player's status (restricted versus unrestricted free agency and such) and term (players typically give up dollars for term and vice versa).

In this case, will the home-run deals for Orpik and Niskanen be a starting point for negotiations for Mike Green (a free agent next summer)? Perhaps, though Green needs to prove that he can stay healthy and produce. If he does, he'll almost certainly be able to beat either of those deals on the open market, if he chooses to go that route; if not, he might slot in a bit lower. Regardless, I don't think the Niskanen deal (based on dollars or term) blew up the Caps' internal salary structure, and the Orpik pact... well, let's just say that it signals to the market that the Caps are open for business, and that's music to free agents' ears.

@JapersRink what prospects could we see in the lineup come October? Is it worth shipping out some vets to make room?

Assuming we're talking about kids who haven't yet made their NHL debuts, Andre Burakovsky (who Adam wrote quite a bit on here) is probably the most likely of the next wave of Caps prospects to break through, especially if he can show some ability at center. But he shouldn't be rushed and the team shouldn't ship out anyone to make room for him unless and until he forces their hand... which seems a long shot, given his age and experience.

No, not really. I'd put more of that on Predators' general manager David Poile than anyone. I mean, do you see a ton of offensively gifted (and mentally stable) forwards that Nashville has drafted over the years? Colin Wilson may be the best recent example of a young, skilled forward not reaching his potential under Trotz, but on the other hand, Trotz had seventh-round pick Patric Hornqvist scoring 20 goals every year.

A lot goes into developing point-producers, and it's hard to lay failures (or successes) entirely at a coach's feet.

@JapersRink what day is the off season solstice (ie longest day of off season)?

The Caps opened training camp on September 12 last year, so let's guess September 11 this year. The Caps played their last game on April 13. That would put the midway point at... June 27. If we're going Caps-game-to-Caps-game (regular season), it's July 11. And if we're measuring from the last game of the NHL season to the first game of next season, it's August 10. But with the playoffs, the Draft, free agency and Development Camp having given us plenty to talk about through the first half of the summer, the longest days of the offseason are definitely still ahead of us.

@JapersRink Over/Under on Wilson getting as many fighting majors at last year? Hopefully less, but the guy likes to throw fisticuffs!

First, let's clear up a commonly misused gambling phrase - an "over/under" is when a statistic is set ahead of time and bettors wager on whether the actual result is over or under the number that was set. So since Tom Wilson had 14 regular season fights last year, you could set the over/under at 14 or ask what the odds of him having 14 fights is.

Gambling geekery aside... I'm going to go with the under. 14 is too many fights for a kid with his skillset and upside, and Trotz will hopefully make sure he doesn't have as many in 2014-15 (the only Predator since the 2004-05 lockout to have as many as 14 fights was Rich Clune last year, who, coincidentally enough, got tuned up by Wilson in December).

@JapersRink why do the caps hate me?

The don't. They love you. They just have a weird way of showing it.