Washington Capitals: Looking at Signings in Context and the Role of Cap Shares

The signings of defensemen Matt Niskanen and Brooks Orpik have generated a lot of discussion, most of it with respect to the Orpik signing, almost all of it unflattering. However, there is a larger context.

Share All sharing options for: Washington Capitals: Looking at Signings in Context and the Role of Cap Shares

If there is one thing common to the early stages of the unrestricted free agent signing period, it is the notion of sticker shock. There is always that player or two (or six) who signs for a sum and term that have fans and media scratching their heads, "he signed for what?!"

For Washington Capitals fans, this notion has relevance with respect to the recent signings of defensemen Matt Niskanen and Brooks Orpik... but we will get to that. Let us first lay some groundwork. This discussion will be restricted to defensemen, given its application to the Caps.

Let's start with this year's high-dollar signings among the defensemen. If you look at those who were signed to unrestricted free agent deals in the first week of the free agent signing period and in the days leading up to it, here is how they rank, dollar-wise (average annual value(AAV)/years, minimum: $4.50M AAV):

This is not the entire group of high dollar defensemen who will be playing under new contracts starting in the 2014-2015 season. There are also those defensemen who signed extensions before their deals expired; had they not signed those extensions, they would have been unrestricted free agents this past week. So, to the list above we might add:

Those are the 11 high-dollar deals to which defensemen were signed beginning with the 2013-2014 season. As a share of what appears to be a $69 million cap, we are left to look at what shares of that cap are encumbered by these deals in the first year of the contract: 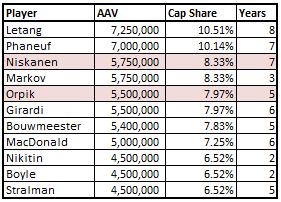 For the Caps, Matt Niskanen and Brooks Orpik fall into the upper half of the AAV/cap share ranking. For fans and critics those dollar numbers have been the focus of attention, but it is the first-year cap share numbers upon which we want to focus.

We took a look at the top 50 cap hits among defensemen - specifically those defensemen with cap hits of at least $4.5 million - to see how their histories of cap share in the first year of their deals compared to Niskanen and Orpik. The review is limited to contracts signed as unrestricted free agents, that whole "apples to apples" thing. Here is the raw information for those current defensemen and their respective histories (cap shares are for the first year of their respective contracts):

The raw information has an accordion aspect to it. As the cap goes up, there are more players with cap hits in Year One of their deals of at least $4.5 million. Some of this might be attributable to noise - the quality of any given UFA class, team needs in any given year, etc. But there is still something of an expansion-contraction aspect to these deals. That 2013 year stands out in this respect; it looks a lot like 2011 with an equivalent total salary cap, and the 2014 volume of deals looks like 2012 with roughly equivalent caps. 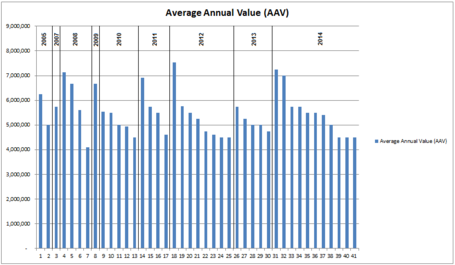 The object here, though, is to look at these deals in through the lens of cap shares. And in that respect, that stability in nominal dollars means declining relative shares of the salary cap over time among current high-AAV defensemen: 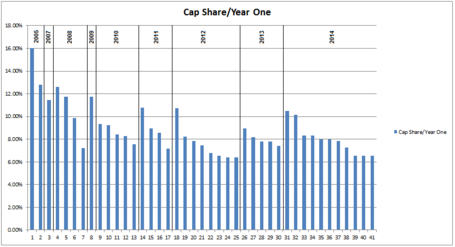 There appears to be something of a sweet spot for the top-end deals, at around eight percent of the salary cap. Again, the nature of the arithmetic factors into this, but behavior seems to repeat itself with respect to the number of deals in the period. In that respect, 2012 and 2014 look very much alike: double digit numbers of defensemen falling into the $4.5 million-plus AAV category, a couple of very high end deals (10+ percent of salary cap: Ryan Suter in 2012, Kris Letang and Dion Phaneuf in 2014), average term looking similar once one accounts for the changes in rules in 2013 regarding maximum length of contracts.

What about the second question, are there more high-cap share deals now than when the salary cap was established? So far in 2014 there are 11 defensemen who will enter the first year of their most recently signed UFA contract in the 2014-15 season with AAV of at least $4.5 million. That is a high in the post 2005-06 era (eight defensemen fit this description entering the 2012-13 season). Generally, however, the magic number here has been "five" - that was the maximum number of such deals for the years 2005-2011, and 2013.

There is another aspect of this worth looking at, and that is the matter of free agents who stay with their teams and those who move on. Is there a difference among the free agents between the categories?

Now that we've established the context, where do the contracts of Matt Niskanen and Brooks Orpik fit into the whole picture? There are a number of ways that question might be addressed. Looking only at 2014, both Niskanen's and Orpik's deals fall into the top half of the 2014-15 Year One cap hits (8.33 percent and 7.97 percent, respectively). Both are in the top half of term as well; only Kris Letang's eight-year deal is longer than Niskanen's, and only those of Andrei Markov, Nikita Nikitin, and Dan Boyle are shorter than Orpik's.

However, "shares" smooth over the effects of year-to-year variability in the dollar value of the cap. It is a reflection of how much a team values a player relative to the resources committed and available. In that respect, looking back across the entire history of the cap and the defensemen under review here, the cap shares of Niskanen (8.33 percent) and Orpik (7.97 percent) are rather ordinary, ranking 19th and 24th among these 41 deals. Niskanen's deal is longer in term than the average of these defensemen over the entire period (seven years; compared to a 5.7 year average, 5.0 year median); Orpik's is in the middle of the neighborhood at five years.

So in the context of the history of the salary cap, if you look at the defensemen with the top AAV values heading into 2014-15, the contracts of Matt Niskanen and Brooks Orpik are not especially noteworthy. Even looking at the 11 deals that will start running with the 2014-15 season, they do not stand out very much on the basis of the numbers - most notably cap share - alone. This is not to say, of course, that they are value deals. Age, wear, likely contributions in the context of their style of play - all are relevant factors to evaluate with respect to the notion of "value." But one can separate these factors from the numbers associated with the contracts themselves. Without separating them, one might conclude (and reasonably so) that there is much risk associated with the Orpik contract in particular.

This is where two factors related to the arithmetic of the cap enter into the discussion.

The first is term. Orpik's deal is a commitment, not an option (as it might be for an NFL contract where there is less guaranteed money). He is likely to encumber some portion of the salary cap for five years or more, regardless of the disposition of his contract over time (e.g., a buyout; if he is bought out after three seasons he will still be on the books through the 2020-21 season).

And since commitment of resources in a capped world means you cannot use them for other purposes, the Orpik contract has both short-term and long-term ramifications for the Caps. In the short term, when Orpik's cap hit is likely to occupy the largest share of payroll, the options left to the Caps to add pieces (e.g., additional free agent signings this summer, additions at the trading deadline, trades that are asymmetric in terms of salary exchanged, etc.) are limited by whatever overpayment - real or perceived - attaches to the Orpik deal (or Niskanen's, for that matter). This would apply to any free agent signing, which almost by definition includes the risk of the unknown of future performance (good or bad) and/or circumstances (injury).

However, not everything is an "unknown", and Orpik's deal is especially risky for the "knowns" - factors like age, games played, style of play and production relative to teammates and opponents over time. One can reasonably anticipate that a 34-year old with more than 700 games under his belt, and who plays a style that imposes a significant physical burden might not have a lot of gas in the tank when that contract gets into its fourth or fifth year (despite his reliability, as Orpik has appeared in more than 75% of his team's games played in every one of his ten full seasons).

Which brings us back to share. Absent any further high-end signings, only 16 defensemen will have higher cap hits than Orpik will have in 2014-2015; only a dozen will have higher cap hits than Niskanen. In the context of the salary-cap era they are not especially noteworthy, but the two deals are significantly different. We have not spent a lot of time on the Niskanen deal here because at 27 years old on Opening Night, the factors of age and wear do not enter into the matter as much as they do for Orpik. One might reasonably expect he will serve the duration of his deal without those factors playing a role in his evolution (circumstance or performance issues are another matter).

To characterize this [Orpik] deal as merely bad, as the worst of the signings in this free agent period, or as indefensible, is simplistic.

But with Orpik, one has the feeling that the Capitals paid - willingly, in fact - a term premium in exchange for short term performance. In other words, they bought two or three years of the "good Orpik" at the expense of the "declining Orpik" that might be the player in the last years of this deal. In that respect, to characterize this deal as merely bad, as the worst of the signings in this free agent period, or as indefensible, is simplistic.

None of this is to say that either deal is an especially good one - especially the Orpik deal, which doesn't look good in its entirety from any number of angles. However, the arithmetic of these deals (yes, including Orpik's) is not especially out of bounds in the context of what defensemen go for in the salary cap era  cap shares over time, not dollars). If you expand the boundaries past the arithmetic to include notions of risk and performance, then perhaps the best that can be said is that the Caps are looking at years 1-3 of the Orpik deal with eyes wide open as to what years 4-5 might mean.

Note: You will notice that there are defensemen in this historical look who fall beneath the $4.5 million AAV threshold we established. That threshold applies to deals commencing in 2014. Some of these defensemen signed unrestricted free agent contracts that expired before their current deals started running. They are included to complete the history for these players.