Capital Improvements: Evaluating the Options on the Blueline

New general manager Brian MacLellan has indicated that upgrading the defense will be the top priority this summer. So what are his options?

Share All sharing options for: Capital Improvements: Evaluating the Options on the Blueline

The 2014 NHL Draft took place over the weekend, and while fans all around the League start imagining the just-selected 18-year-olds in their respective teams' lineup, the reality is that, outside the first few picks, none of the kids drafted are going to be ready to make an impact in the NHL next season. But whether the recently-drafted kids fit an immediate need is irrelevant - immediate needs are addressed by acquiring immediate NHL players.

One of the Capitals' immediate needs, of course, is for some help on the blue line, preferably a defender that can play on the top two pairs and take some penalty-killing time. It's a need that has been identified by Caps fans for years, and one that we've discussed plenty in the past. Unlike the past, however, it seems that this year the Capitals agree. Newly minted GM Brian MacLellan has stated that getting help on defense is the priority in the off-season, and even indicated that they've already targeted a couple of players. With that in mind, and building off our review of Alex Ovechkin playing power versus power and the examination of the possible second-line centers in the same context, let's take a look at which defenders may be available and would best fit the Caps' need for a top-four defender.

Based on reviewing the unrestricted free-agent defensemen, and adding a couple of players that have been rumored to be involved in trade discussions, we've pulled together the following list for review: Matt Niskanen, Anton Stralman, Christian Ehrhoff, Tom Gilbert, Ed Jovanovski, Mark Fayne, and Dan Boyle from the free agent market, and Dion Phaneuf, Brian Campbell, Keith Yandle, and Alexander Edler on the potential trade market. Here's a high-level look at what they did in 2013-14:

Right away we see that the Caps have different options depending on what kind of defender they are looking for. There are some stay-at-home defensive guys, guys who aren't going to provide much in the way of scoring and won't be very useful on the power play. And with John Carlson, Mike Green (assuming he is still around on opening night...), and Ovechkin, the need for another point man on the power play doesn't seem to be there. It's tempting, then, to say that the defense-first guys are where the Caps should be looking - but don't underestimate the impact the offense-first guys can have on possession numbers, while keeping in mind that anyone putting up a lot of their points on the power play is not likely to get that opportunity on the Caps (not to mention that those past point totals tend to drive up the player's price on the open market). Finding a guy that has some ability to chip in offensively, but that is also competent in the defensive end, should be the priority.

So on to the match-ups, how each of these blueliners fared against opponents' first, second, third and fourth lines: 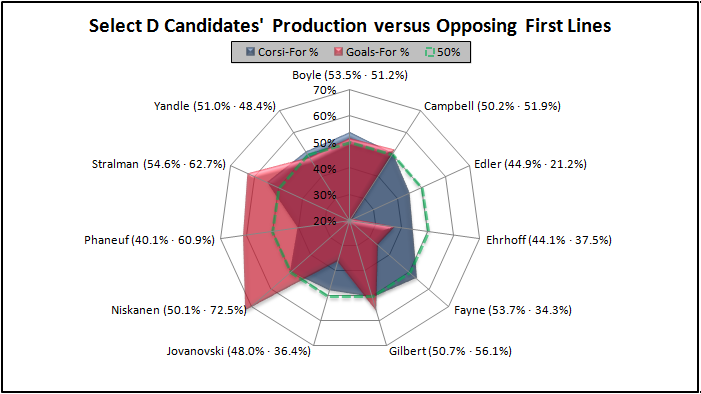 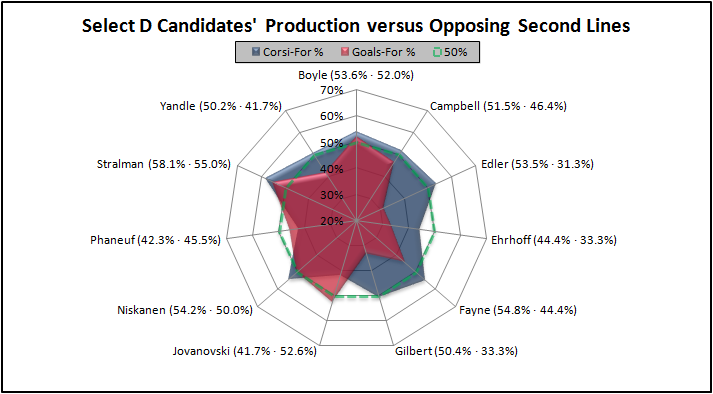 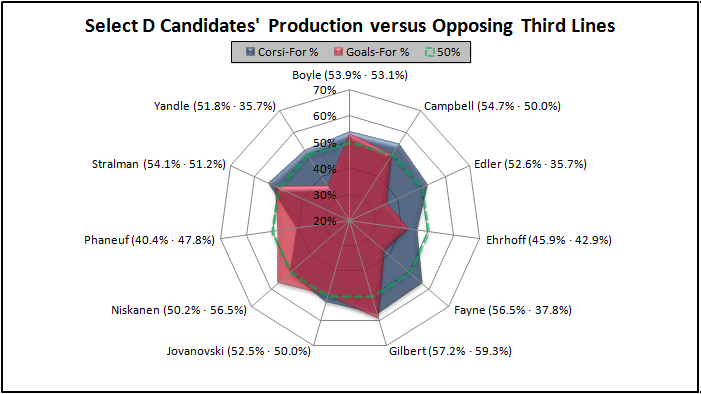 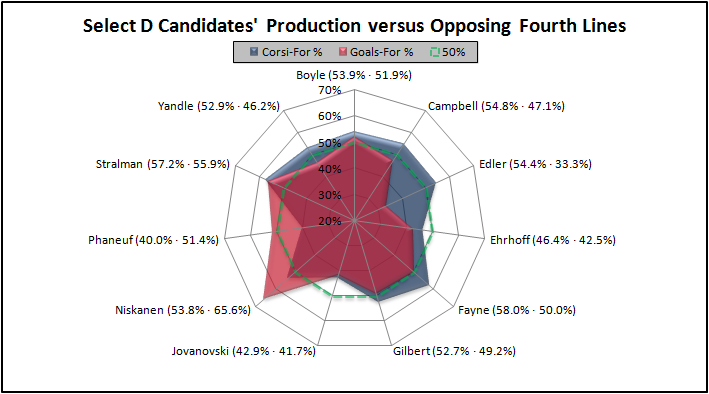 As with the prior posts, data courtesy of Muneeb.

Niskanen and Stralman have been the jewels of the free-agency class for weeks now, and it's easy to see why. Both guys had very solid possession numbers across the board here, but they both also faced second lines and third lines more often than they faced first lines; neither guy was relied on to be the top-pair defensive unit at even strength. That's not necessarily a problem - the Caps don't specifically need either guy to be a top pair player, as Carlson and Karl Alzner could reasonably be asked to continue to handle those responsibilities. But considering the money they are both likely to get, it should be kept in mind.

It's also worth noting that Niskanen got three minutes of power-play time per game and did about a third of his scoring with the man advantage, but got surprisingly little penalty-kill time for the Penguins last season. He's not going to be given that much power play time on the Caps, so adjust your production expectations accordingly. Meanwhile, Stralman got very little power play time and had zero power play production. He's a more defense-first guy than Niskanen appears to be, but there's also less risk that his great season looks inflated due to special teams.

While Niskanen and Stralman have gotten all of the attention, Mark Fayne has quietly put up very good numbers. There's always a risk that his numbers are inflated by the Devils' system, one that perennially has great possession numbers that fail to translate to actual scoring, so you have to take Fayne's raw numbers with a grain of salt (and, to be fair, Stralman and Niskanen were also on good possession teams). What stands out with these numbers is that unlike Stralman and Niskanen, Fayne played more time against first lines than against second or third lines. Fayne's possession numbers increase consistently as he faces weaker competition, but the fact that he was relied upon to face top competition for the Devils, and relied upon to take quite a few more defensive zone starts than his teammates, is a big feather in his cap. He got even less power play time than Stralman, and produced less at even strength, but a defense-first guy may be exactly what the Caps need, so that's not a red flag that should turn the Caps away.

Fayne, Niskanen, and Stralman are looking for their first UFA contracts, and entering their prime years- as such, their respective price tags could be rather high. If the Caps wanted to go a potentially lower-cost route, however, there are a few options of the elder, more experienced variety. The Sharks have moved on from Dan Boyle, trading his rights to the New York Islanders (where he will not sign), while Ehrhoff and Jovanovski have just been bought out by their former clubs.

Boyle put up remarkably consistent possession numbers across all four lines. It doesn't look like he needed to be protected from top competition; on the contrary, he actually faced opponents' top lines more often than he faced second or third lines. The concern in terms of fit with the Caps is that he's an offense-first defender who got a lot of power play time and scored half his points on the power play. He's another right handed shot that can QB a power play, but that's not something the Caps are in need of. Still, he got the job done facing top competition, so for a short term deal (2-3 years) he is worth a look as he'd undeniably be an upgrade on what the Caps have internally.

Jovanovski has been around forever, and it shows. He missed a lot of time last year, playing in only 37 games, and his possession numbers indicate he should really be playing against third lines rather than the top two lines. He wouldn't be a bad veteran addition to mentor some of the younger defenders and play on a more sheltered pair if the price were right, but he's not the upgrade the Caps need at the top of the rotation.

[Ehrhoff]'s the most attractive candidate on the free agent market and the Caps should make a strong play to bring him to D.C.

Ehrhoff is a stud, playing on a bad team and out-performing his teammates while also facing the top competition (he played more against the first line than the second line, and more against the second line than the third line). As with Fayne, his possession numbers increased consistently as his opposition quality dropped. He has routinely logged big minutes on the power play, and as a lefty with a big shot he'd give the Caps options if they chose to switch up their power-play unit (or wanted to add a big shot to the lefty passer on the half-wall), but he also had more shorthanded time on ice than any other defender on Buffalo. He's a true two-way defender that can play in any situation. He's the most attractive candidate on the free agent market and the Caps should make a strong play to bring him to D.C.

Somewhere in between the first-time-UFA crop and the old hands listed above is Gilbert. He's 31, so he's still in his prime years but has had a couple of shots at a UFA contract and hasn't been able to find a team to commit to him. Like Ehrhoff, Gilbert was more frequently used against the top two lines and has held his own in that role, while having a bit of a field day against the lower lines. Gilbert continues to fly under the radar, but he'd be a great addition if the top-tier defenders choose to sign elsewhere or are looking for big time money and term.

If the Caps can't address the defense through free agency and are intent on finding a defensive upgrade, there are a few guys who have been bandied about the trade rumor mill. Phaneuf, Cambpell, Yandle and Edler are all guys who were used against top lines and have been involved in trade discussions for various reasons, and all could be potential targets for the Caps. And none of them played on playoff teams, so the quality of the teams isn't a huge issue in evaluating their respective play.

Phaneuf had the most top-heavy assignment load of the four, and he had the most even performance in that assignment. Campbell is the only one from these top-pair defenders to have over 50% possession against top lines, but he had his minutes more evenly spread and saw a 4.5% increase in his possession numbers from the first line to the third and fourth lines. Edler's distribution of ice time was more even and his improvement as he dropped in the lineup was even more drastic - he increased 7.7% increase in possession from first line to third line, 9.5% from first to fourth.

Yandle had an inverse deployment pattern, playing fewer minutes against the increasing competition; he put up positive Corsi numbers against all four lines, but clearly did better against third and fourth lines (and his usage would corroborate that his coaching staff didn't believe he was capable of being a true power versus power defender). Yandle appears to be a guy who feasts on power play time (3/5 of his points came on the power play) and lower competition. It's less clear that he'd be a guy that would give the Caps the improvement that they need in the top four (and the thought of a Green-Yandle pair... yikes).

The cost for any of these guys would be significant, so it should be a last resort, but at least three of the four would be able to step in and improve the Caps' top four (though Phaneuf and Campbell appear better suited to play a top pair role if that's what the Caps are looking for).

As with the second-line center situation, the Caps have plenty of options available to upgrade the defense, and most of them will be free agents as of tomorrow - the Caps should be able to avoid the trade market if they are willing to be aggressive in their pursuit of these soon-to-be UFAs. We've been told that defense is the priority for the Caps; with July 1st just around the corner, it's time for them to put their money where their mouth is.

Appendix: The defensemen in question, in a motion chart, because why not?