Anxiety over the second-line center is reaching a fever pitch, just how much better can the Caps get in one season, and what Brian MacLellan needs to do in this week's edition of "you ask, we answer."

Leading off, that perennial bugaboo...

@JapersRink #japersmailbag why are the caps acting like resigning grabo is no biggie? Depth at C has been a long term problem. #frustrating

@JapersRink We all know why MJ90, Kuzya, or Laich would be a weak 2C. What are the reasons why it could work out this time? #JapersMailbag

@JapersRink What do you think about the potential fit for Kuznetsov as 2C next season and in the long run? (in reference to GMBM comments)

@JapersRink do I need to start emotionally preparing myself about the possibility of Grabo not returning?

Hmm... I'm picking up some anxiety regarding the second-line center slot on the roster. And who can blame Caps fans, who have seen a revolving door of largely mediocre options try to fill that roll since Sergei Fedorov left town before a pretty good one fell into their lap last summer in Mikhail Grabovski.

Let's start with what Brian MacLellan has actually said about the prospect of re-signing Grabo and the team's in-house options at the position:

"We liked the job Grabovski did for us last year, but we’re also balancing what we’re going to do with our roster and the dollars we’re spending on our roster. I think one of the priorities for me is to upgrade our defense. Depending on the cost of that and overall cap room, we’ll make a decision on Grabovski.

"We have some options," he said. "I’d like to explore [Evgeny] Kuznetsov playing his natural position at center to see how well he can handle that. [Marcus] Johansson’s played there a little bit. He’s been back and forth. I know the previous coach [Adam Oates] liked him on the wing.

"Brooks Laich has been in and out. I guess my overall philosophy is we’re going to have to develop one of our young guys to play second-line center. I think that’s hard to add in free agency. If the cost of Grabovski makes sense to our overall structure, I think we would consider bringing him back and playing in that role."

"It’s about improving our team. If I really thought there was a guy who would be a lot better than Kuznetsov, Johansson or Laich, I’d pursue it. If the possibility’s there, I’ll pursue it. I just think there’s been limited possibilities. It’s a position that needs to be developed."

Now, let's take MacLellan's posture here with a grain of salt - he was (and, presumably, still is) actively negotiating with Grabovski's agent on a new deal to keep the 30-year-old pivot in town, so of course he's going to play-up his alternatives and minimize how utterly screwed his team would be if Grabovski walks and the team relies on in-house options to replace him. That said, Grabovski and his agent have made it known that they're open for business now, and could very well hit free agency next week. (It's hard to argue with MacLellan's larger points about finding replacements via free agency and the need to develop from within... but that requires better drafting at the position than what the Caps have been able to do.)

It's time for the discussion Caps fans have every summer: who's going to fill the gaping hole in the lineup where a second-line center belongs?

As to the specifics on the internal options, not one of the three players mentioned has shown an ability yet to center a scoring line (and Laich has pretty much shown that he can't, even if he can stay healthy). Could Kuznetsov grow into that role over time? It's possible. Could he in 2013-14? It's highly unlikely... just peep those possession and face-off numbers. So the team would basically be hoping for performances these players haven't yet delivered... and "hope" is never a particularly good plan.

Regarding external options, Rob went into great detail on this point earlier in the week, and it's hard not to conclude that re-upping with Grabovski is the Caps best - if not only - move here. Let's just hope the rest of the NHL thinks like Steve Simmons does, that "Grabovski is a bad player." Though, in fairness to Simmons... Grabo sure does look like a "lone wolf" here: 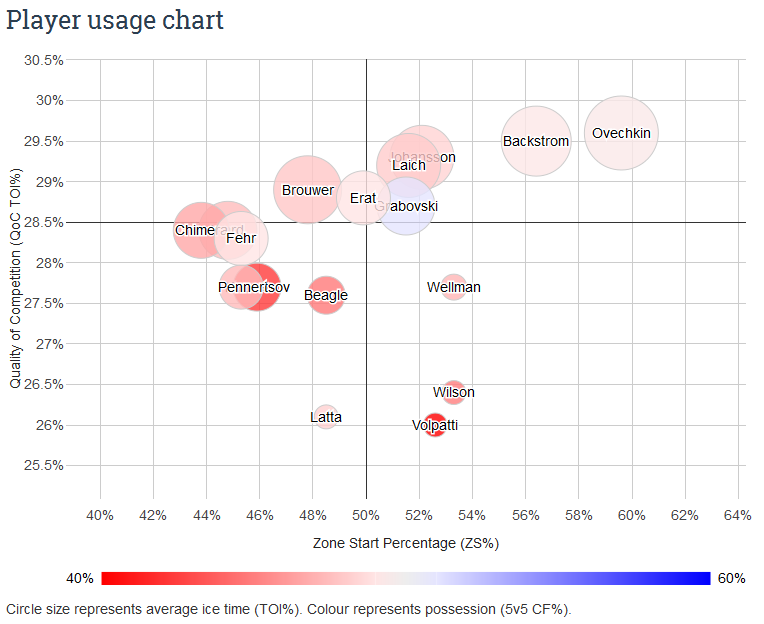 Next up, a question about getting better:

@JapersRink What is the biggest Fenwick Close turnaround year to year for a team since the stat has been tracked?#JapersMailbag #Caps

The "BtN Era" of publicly available advanced stat tracking began with the 2007-08 season so that's where we'll start (though it's worth noting that thanks to Tyler Dellow, there's historical data on team possession metrics available using a proxy for Corsi percentage dating back to 1997-98). In the six seasons since 2007-08, there have been eight years in which a team has improved its five-on-five Fenwick-Close percentage by five percent or more over the previous campaign, with the biggest improvement belonging to the 2012-13 Canadiens, who bumped their FF% up a whopping 7.2% (to 53.8%) after hiring Michel Therien to replace Randy Cunneyworth (who had himself replaced Jacques Martin earlier in the 2011-12 season).

The Relatively Good and Bad of the Past Seven Seasons

The Relatively Good and Bad of the Past Seven Seasons

Of course, 2012-13 was a short season and the Habs gave 5.4 percent of that spike back in 2013-14, so let's ignore the shortened season (on both ends) and that leaves us with... the 2010-11 Lightning, who got a 6.4% boost in Guy Boucher's first season behind the bench (just a bit less than the 6.8% increase they saw this past season, incidentally, in Jon Cooper's first full campaign behind the bench... dude should've won the Adams).

All of the data is here (taken from Stats.HockeyAnalysis.com), in case you're curious. Of particular interest to Caps fans, it's worth noting that they're the only team in the League that has dropped in that metric in each season since it's been tracked. So yeah... yuck. And even if the Caps matched that short-season 7.2% increase that the Canadiens posted in 2012-13, they still wouldn't match what the Kings, Blackhawks and Sharks were able to do this past season.

But take heart - a change behind the bench can make a big difference (and we're certainly banking on it). After all, if we take a look at Dellow's Corsi percentage proxy for the 2006-07 Caps and compare it to the 2007-08 squad (and three-quarters of a season of Bruce Boudreau), that's an improvement of 8.8%.

So much for tempering expectations.

Here's one about the new boss:

@JapersRink time will tell if MacLellan is right hire. What do the caps need to do short term to change the public perception that its meh

Two things that are related - MacLellan needs to differentiate himself from his predecessor and acknowledge and address what have been persistent needs around these parts, particularly at second-line center (see above) and on the blueline. Unless and until he does those things, Caps fans can be forgiven for being skeptical of the MacLellan Era being anything other than more of the same, especially since he owns at least a part of the team's recent history, good and bad.