From Alzner to Wilson, we're taking a look at and grading the 2013-14 season for every player who laced 'em up for the Caps for a significant number of games during the campaign, with an eye towards 2014-15. Next up, Mikhail Grabovski. 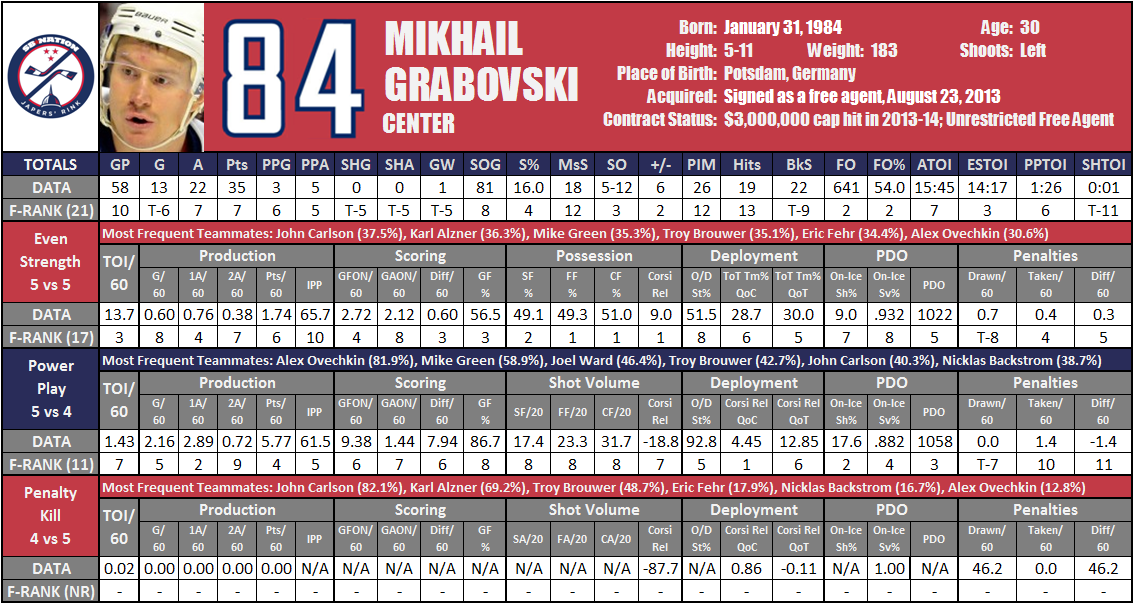 Grabovski and his most frequent linemates (via Stats.HockeyAnalysis.com) and lines (via our own Muneeb): 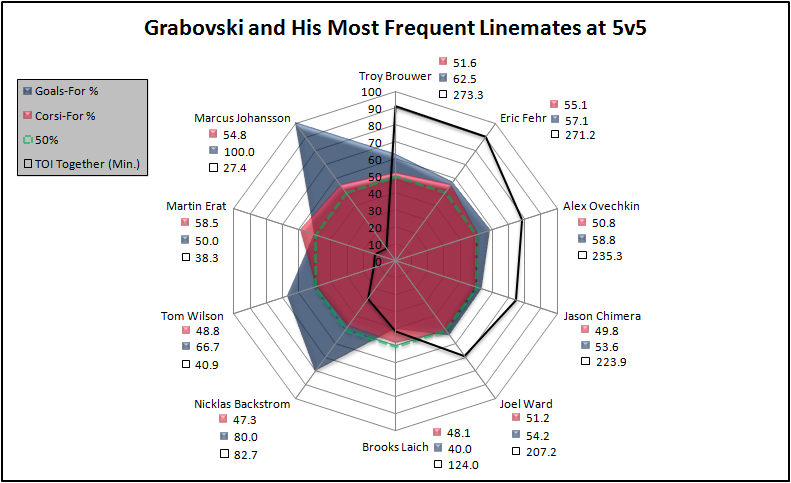 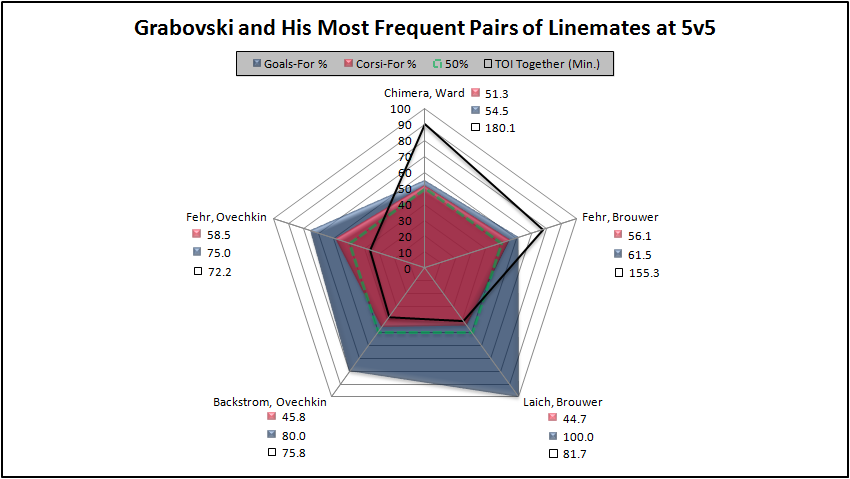 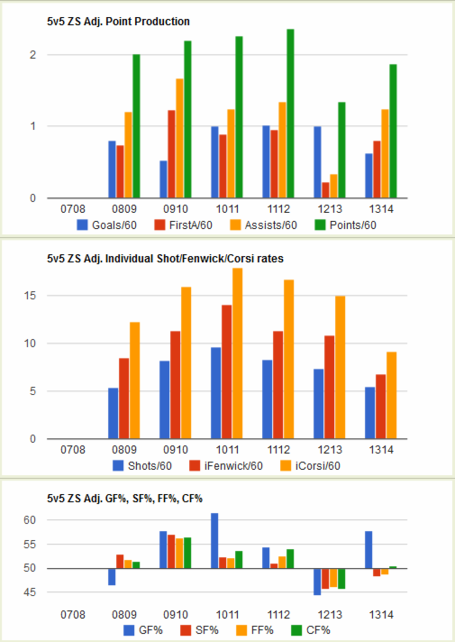 Interesting Stat: Grabovski not only had his highest CF% while skating alongside Eric Fehr (55.1), but also the biggest drop-off when skating without him (down to 48.9). Actually, check that - his highest CF% came with Martin Erat... but that was in just over 38 minutes of ice time. Thanks, coach!

The Good: When Mikhail Grabovski, fresh off a pretty nasty breakup with the Maple Leafs, signed with the Caps last summer, it seemed like the perfect situation for both - Grabovski was eager to prove that he could still play after being misused by Toronto head coach Randy Carlyle, while the Caps were badly in need of another second-line center to replace departing free agent Mike Ribeiro. And what seemed like an ideal fit at the time did not disappoint, for the most part.

What would prove to be a bounceback season offensively got off to a red-hot start, as Grabovski notched a hat trick (and added an assist) on opening night in Chicago, which not only was his first career hat trick but also marked the first time a Cap had scored three times in the season's first game in franchise history. Grabovski played in just ten more games this season than he did last year, yet saw a dramatic increase in his offensive production over the 2012-13 season, with 13 goals, 22 assists and 35 points (up from his 9-7-16 line from last year).

Although he was occasionally used on the power play, the bulk of Grabovski's ice time - and production - was at even strength, with 10 of his 13 goals and 17 of his 22 assists coming at five-a-side, and his even-strength assists/60 and points/60 were well up from 2012-13. He also posted the second-highest even-strength GF% in his career, and led all Caps' forwards who appeared in at least 21 games in even-strength CF% Rel, with the second-highest shooting percentage (trailing only Joel Ward).

A look at the impressive work by the early-season trio of Mikhail Grabovski, Jason Chimera and Joel Ward.

His production at both even strength and on special teams was pretty consistent overall, with just one pointless streak that extended longer than three games - a five-game drought in January (the last game of which coincided with the injury that caused him to miss 21 of the next 22 games). While it was assumed that Grabovski's role on the team would be as the second-line center, he actually had some of his best results centering - who else? - Jason Chimera and Ward. Six of his 13 goals were assisted on by either Ward or Chimera or both, and for the first quarter of the season or so, few lines around the League were as potent as the Caps' third-line trio.

The Bad: There's no question that Grabovski's performance this year far exceeded that of his final year with the Leafs... but the bar there was pretty low. Setting aside his dismal 2012-13 season, his numbers were well off his usual pace in just about every metric, from goals/60 at even strength to CF% and FF%. Chalk a lot of that up to Adam Oates, but not all of it.

Unfortunately for Grabovksi (and most definitely the team), his season was slowed a bit by injury that shortened his campaign to just 58 games. In mid-January he sprained his ankle against the Devils and ended up missing the final eight games before the Olympic break; the bad luck continued in his first game back at the end of February, when he skated just 2:20 against the Panthers before re-injuring his ankle and missing another 14 games. He managed to return in time for the home stretch, but he was "eased" back into the lineup and played the final eight games as a wing (albeit on the top line), registering just two points (one goal, one assist) over that span.

With the Caps already holding a 2-0 lead over Henrik Lundqvist and the Rangers in early December, Grabovski was hauled down en route to the net and was awarded a penalty shot. One might have expected a guy who excels at shootouts and possesses some pretty decent stickhandling abilities to dangle and deke his way around Lundqvist; instead, Grabovski unleashed a slapper that took everyone - including the Rangers' goalie - by surprise.

The Discussion: The biggest question surrounding Mikhail Grabovski is whether or not he'll be back next year (which in turn hinges on the coaching decisions made in the coming weeks) - so how much would you pay, and for how long, to keep Grabovski in DC? Does his value as the long-lost second-line center outweigh the fact that he'll be 31 by the end of next season? What would it take for Grabovski to earn a 10 next year?