From Alzner to Wilson, we're taking a look at and grading the 2013-14 season for every player who laced 'em up for the Caps for a significant number of games during the campaign, with an eye towards 2014-15. Next up, Eric Fehr. 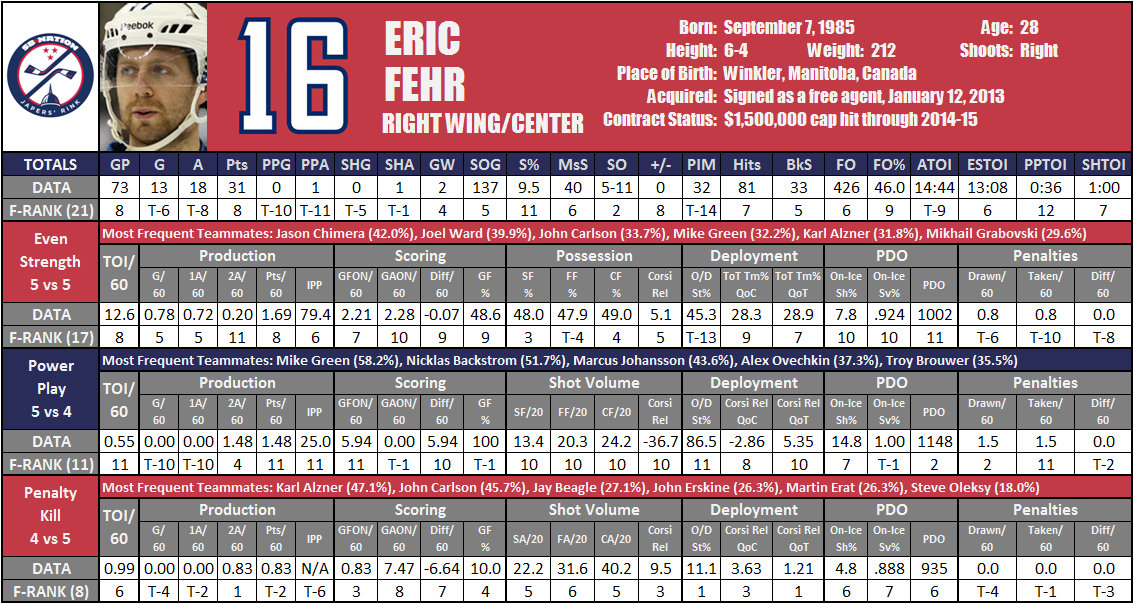 Fehr and his most frequent linemates (via Stats.HockeyAnalysis.com) and lines (via our own Muneeb): 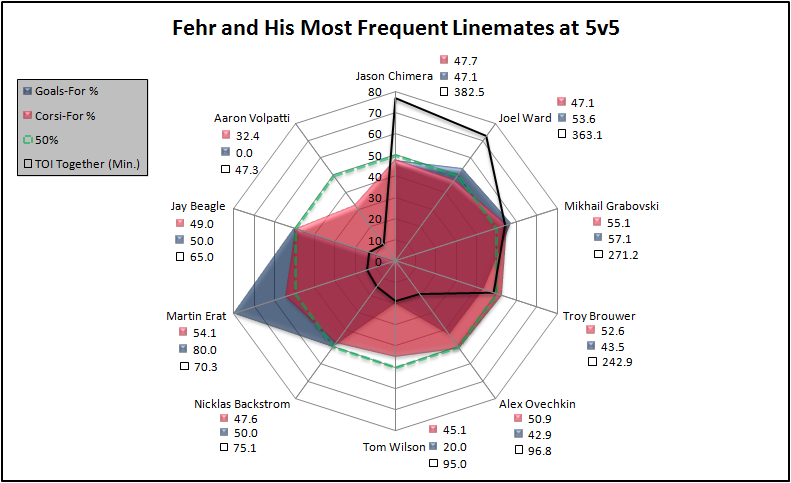 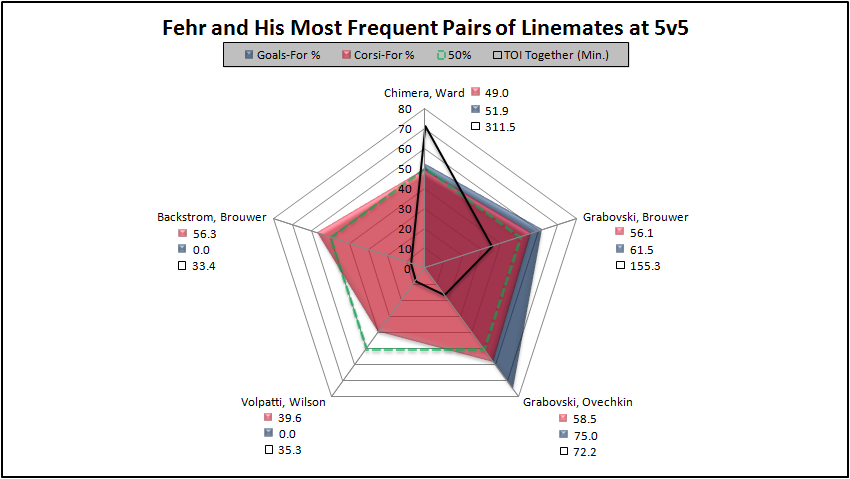 Fehr's Past Six Seasons (via Stats.HockeyAnalysis.com): 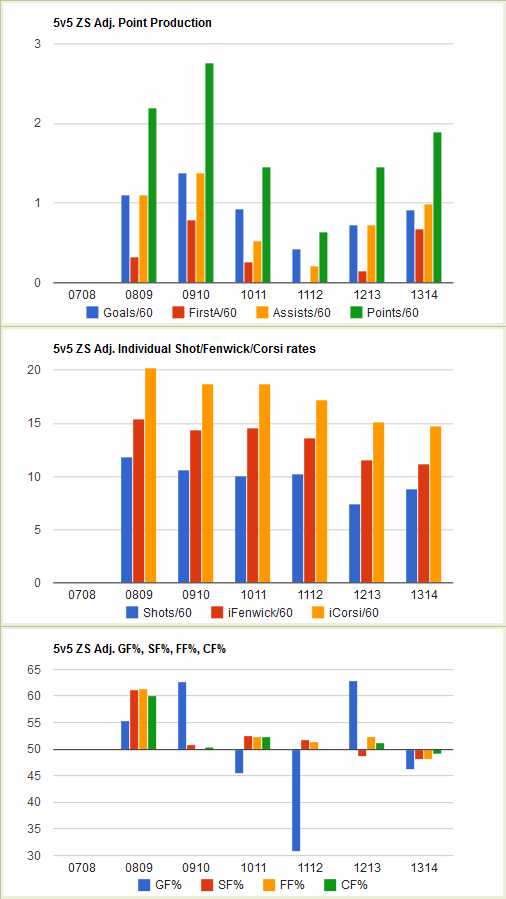 Key Stat: Set career highs in assists and games-played while playing a good bit of center for the first time in his career.

Interesting Stat: Among skaters who were on the ice for at least a dozen Caps goals at five-on-five, Fehr ranked second to only Alex Ovechkin in goal share (that is, percentage of on-ice goals that he scored) and assist share (you can figure that one out now), who registered a point on 79.4% (27 of 34) of the goals the Caps scored at fives with him on the ice.

The Good: Coming off the well-publicized and relatively successful position change he drew up for his captain in 2013, Adam Oates went back to the laboratory and came to training camp with "Eric Fehr and Martin Erat as centers." Fehr seemed like an odd choice for the role, but he was game and spent most of the season bouncing between left wing and center and up and down the four lines. By the time the season ended, he was on the team's most effective line (between Jason Chimera and Joel Ward), had his second-best offensive season (and his healthiest), and even won 46 percent of his 426 face-offs, including north of 49 percent in the defensive zone. Not bad for a guy with chronically bad shoulders who had been credited with having taken 18 draws in 306 career games entering the season.

Read if You Want To, But it's Not a Must

A look at the turnabout in Fehr's play

Read if You Want To, But it's Not a Must

Fehr's possession numbers were also (comparatively) strong, as he ranked second among the team's forwards in relative shots-for percentage, despite unfavorable zone starts and bottom-six linemates. Fehr also demonstrated his versatility, succeeding whether on a scoring-line wing (55.1 Corsi-for percentage and 57.1 goals-for percentage alongside Mikhail Grabovski) or centering the team's top-checking trio (49.0/52.1 on the third line). In fact, the Caps' second- and third-most productive five-on-five lines (by goal rate, minimum 150 minutes played) featured Fehr - lining up on the left side of Grabovski and Troy Brouwer, and then between Chimera and Ward. (Since you're wondering, the top spot was Chimera-Grabovski-Ward). Even Ovechkin saw a bit of a bump when he was out there with Fehr.

The Bad: Fehr's transformation into "acceptable bottom-six NHL center" didn't happen overnight, and it was notably rough at the outset (to be expected, of course) - from games eight through 12, Fehr posted a woeful 31.7 Corsi-for percentage and won just 36.1% of his face-offs. As a result, the center experiment was basically put on hold for half the season, and Fehr watched nine games from the press box before returning to the lineup as a second-line wing.

And the transformation isn't necessarily complete, either - in the 35 games Fehr played in which he took three face-offs or fewer (i.e. when he lined up at wing), his CF% was 52.3; in the 38 games in which he took more than three draws (i.e. when he was a center, including from game 58 on), that number dropped to 45.5, and the disparity in GF% was slightly greater (54.5 to 44.4). Granted, much (if not most) of that can be chalked up to typically playing on a scoring line as a wing versus a checking trio as a pivot.

There just isn't all that much "bad" here. Even his 46% efficiency in the dot would have been up above 50% with just one more face-off won every two games.

With the Caps trailing the Canadiens by a goal with less than six minutes left back at the end of November, Fehr had a semi-break down the left wing and put a backhand shot on net before losing his stick reaching for the rebound. Fehr hustled  to pick up his twig just in time to one-touch a pass to the slot for Mikhail Grabovski to rip past Peter Budaj and tie a game the Caps would eventually win in a shootout. Come to think of it, that play is a decent metaphor for Fehr's career - promising early with somewhat disappointing results, but his persistence paid off in the end. Okay, maybe that's a stretch.

The Discussion: The big question on Fehr going forward is whether he's a wing or a center, and that might depend more on the roster than his abilities. And does he still have top-six talent or upside, or is his future in the bottom-six? (Maybe just label him a middle-sixer.) What would it take for Fehr to earn a 10 next year?