From Alzner to Wilson, we're taking a look at and grading the 2013-14 season for every player who laced 'em up for the Caps for a significant number of games during the campaign, with an eye towards 2014-15. Next up, Jason Chimera. 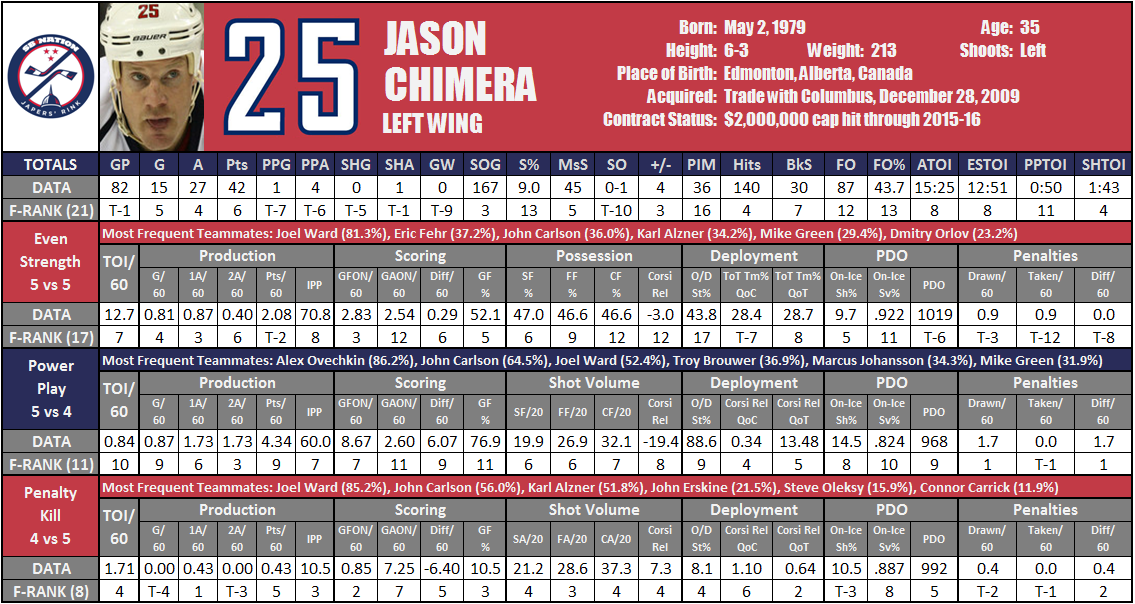 Chimera and his most frequent linemates (via Stats.HockeyAnalysis.com) and lines (via our own Muneeb): 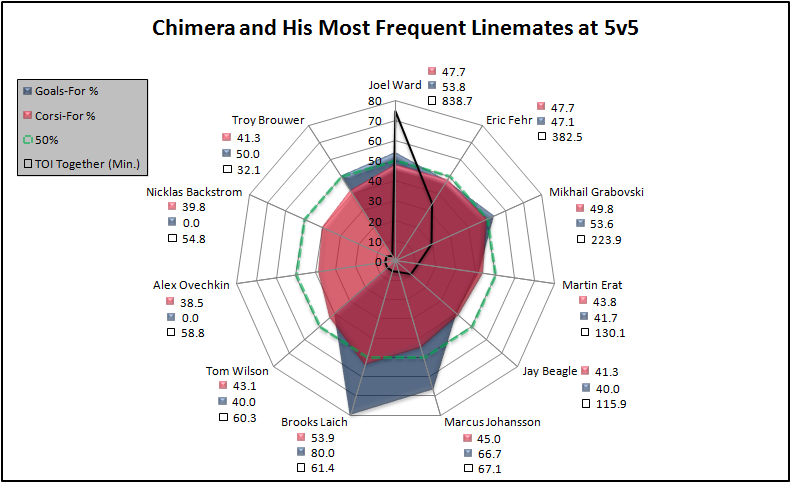 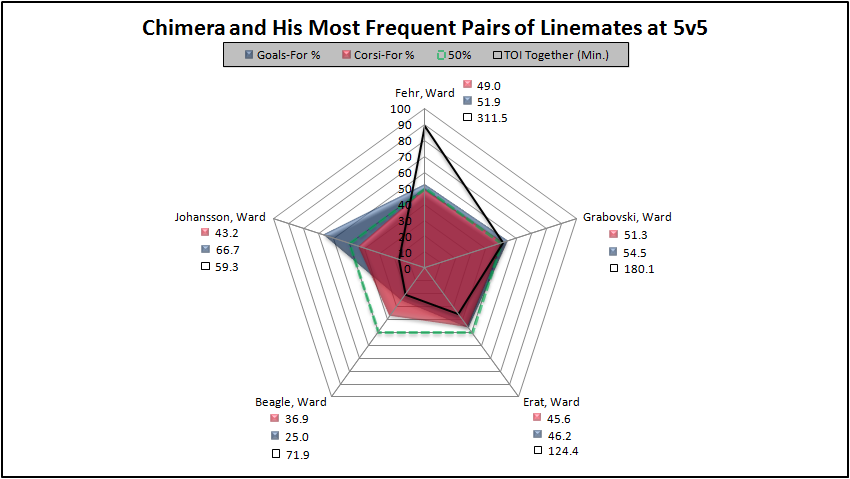 Chimera's Past Seven Seasons (via Stats.HockeyAnalysis.com): 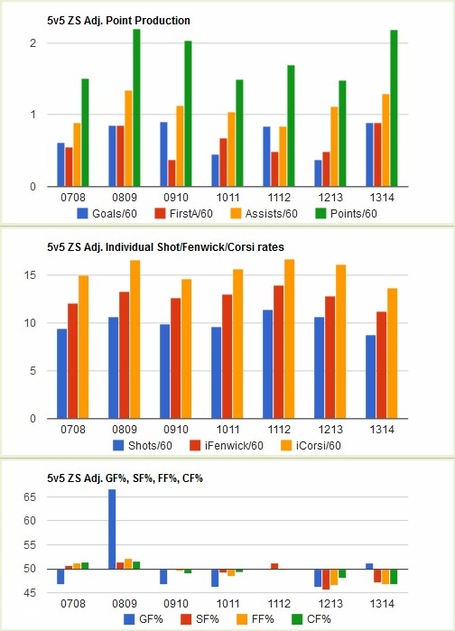 Interesting Stat: Despite his reputation for having stone hands, Chimera didn't waste many opportunities in 2013-2014, putting 65.3% of his shot attempts on goal (derived by dividing shots on goal by Corsi events). That's the best percentage on the Caps in 2013-2014 (narrowly edging out Tom Wilson). And it's not as though he's picking his spots: Chimera has been second on the Caps in terms of shots/60 minutes (behind you-know-who) for the last three years running.

The Good: Chimera rebounded from an atrocious 2012-2013 season, during which he couldn't buy a goal, to post the best season of his career in terms of points, with 42 (versus a previous career high of 39 set in 2011-2012). Along with Joel Ward and Eric Fehr, Chimera formed what was arguably the Caps' most consistently effective line at even strength: Ward, Chimera, and Fehr finished 1st, 2nd, and 3rd on the Caps in points/60 minutes at even strength.

Chimera's production at even strength earned him 50 seconds of power-play ice time per game, the second-highest total in his Caps tenure. Chimera cashed that ice time in for five power-play points (a goal and four assists), which is his highest power-play point total during his time in the District.

While not known as a big hitter in the vein of Tom Wilson, Chimera continued to bring a physical presence, notching 6.6 hits/60 minutes, good for 5th overall on the Caps. Chimera also maintained his discipline to a large extent: of the top-five Caps in terms of hits/60 (Tom Wilson, Troy Brouwer, Jay Beagle, Alex Ovechkin, and Chimera), Chimera had the lowest number of penalties taken/60, at .9, good for 5th overall on the team.

The Bad: Chimera's possession stats have typically been underwhelming, especially given his speed, ability to carry/chase the puck into the offensive zone, and willingness to shoot. Chimera looks as though he should have good possession stats. . . but he really doesn't. Of Caps players who suited up for more than half the season this year (41 games), Chimera ranked 14th out of 17 in CorsiFor%, and 13th out of 17 in FenwickFor% (narrowly edging out Jay Beagle). The names behind Chimera on that list are guys either beginning their NHL career on the 4th line (Wilson), holding on for dear life to their NHL paycheck (Aaron Volpatti, Beagle), or trying unsuccessfully to return from a devastating groin injury (Brooks Laich). That's not exactly good company.

Chimera can lay some of the blame for his poor possession stats at the feet of the coaching staff. Adam Oates gave Chimera tough assignments this year, putting him out for the lowest percentage of offensive-zone faceoffs (25.9%), and the highest percentage of defensive-zone faceoffs (33.3%). To give some idea of how tough Chimera's zone starts were in relation to his teammates, Eric Fehr, his second-most common linemate after Joel Ward, had a zone-start percentage nearly three points higher than Chimera.

While zone-starts factor into Chimera's poor possession stats, they're not solely responsible for them. Joel Ward saw similar usage and had a CorsiFor% nearly a point higher. Chimera's with-or-without-you (WOWY) stats suggest that he certainly wasn't driving puck-possession metrics. Chimera and Ward had a 47.7 CorsiFor% when together. Ward dropped to 44.9% without Chimera, but Chimera plummeted to 41.8% sans Ward. Chimera posted an identical 47.7% playing with Fehr, but dropped to 45.8% when separated, while Fehr's percentage jumped to 50.2% without Chimera.

This goal sums up Chimera's year: hard work from Joel Ward, a strong drive to the net, and a healthy helping of puck-luck.

The Discussion: As a hockey player, Jason Chimera is a bit like a manic drinking buddy. When he's up, he's a smiling, jovial guy who's buying rounds, singing along to Poison on the juke box, and telling the girl sitting next to you about how you once rescued a puppy from a burning building. When he's down, it's as though the puppy didn't make it out of the burning building and you're at its funeral. Whereas your buddy's moods are likely fueled by alcohol, Chimera's ups and downs are fueled by puck-luck. His Rink Wraps clearly demonstrate this correlation:

So who is Jason Chimera? Is he a stone-handed speedster in the vein of Rico Fata? Is he an underrated third-line player who punches above his weight offensively? Or is he just a guy whose speed allows him to put tons of rubber on net, but who doesn't have the fine shooting control to pick corners with regularity?

How you answer these questions likely shapes how you view Chimera's position on the Caps' roster going forward. If you think he's a guy with stone hands who doesn't drive puck-possession metrics, you likely don't think he's worth the two-year $4m contract extension then-GM George McPhee signed him to this season. If you think he's an underrated third-liner then you probably look at his salary cap comparables (notables include Max Talbot, Marcel Goc, Matt Hendricks, and Chris Neil) and think he's a steal for a player who can put up a half-point per game without much power-play ice time.

Given Chimera's declining shot rate, unsustainable puck-luck, and his advancing age, is he ripe for a fall next year? Or will his "Cliff Ronning-in-NHL 94" skating talent prevent him from rapid age-related decline? How will he adjust now that he's removed from Adam Oates' north-south system, which seemingly suited Chimera (and his running mate Ward) to a "T." Given his mercurial performance over the last several years and his new contract, what would it take for Chimera to earn a 10 next year?