From Alzner to Wilson, we're taking a look at and grading the 2013-14 season for every player who laced 'em up for the Caps for a significant number of games during the campaign, with an eye towards 2014-15. Next up, Nate Schmidt. 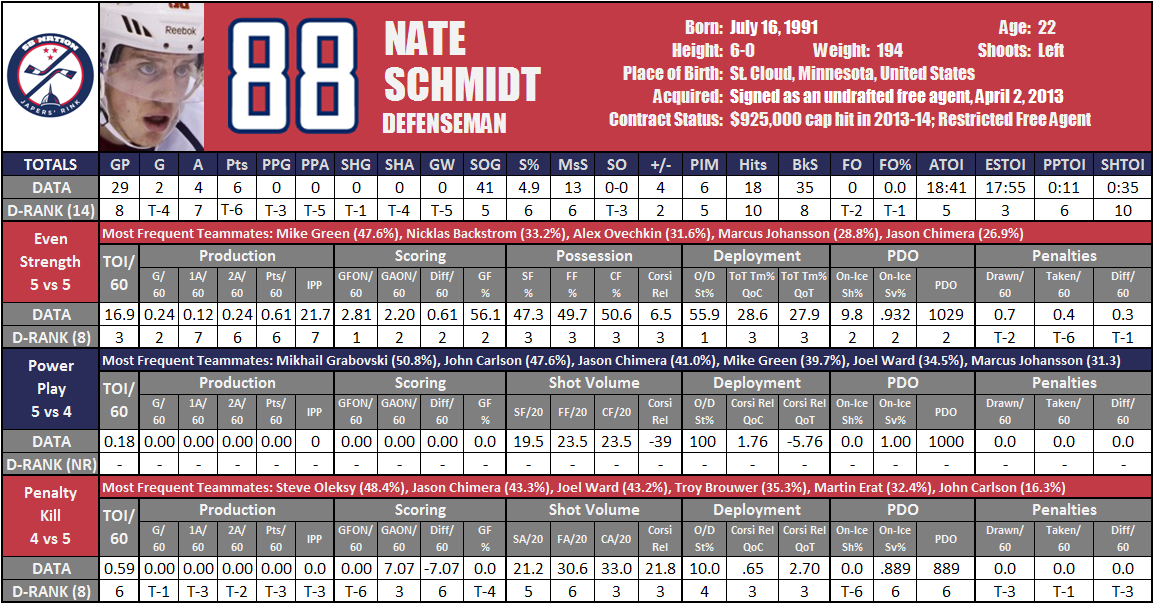 Schmidt and his most frequent defensive partners (via Stats.HockeyAnalysis.com): 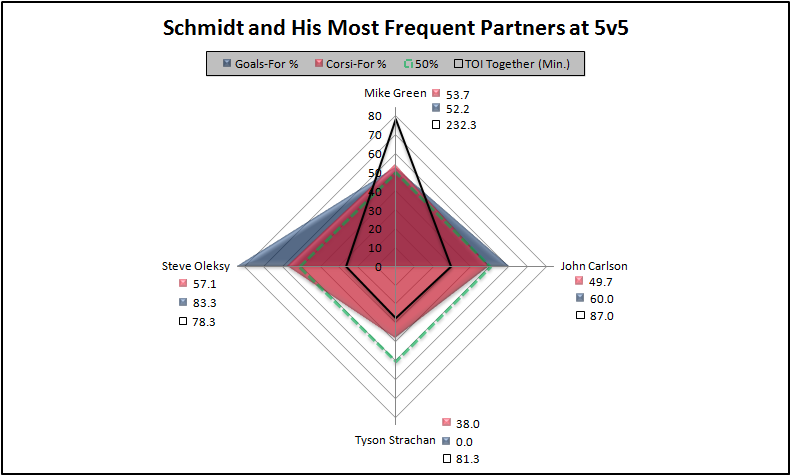 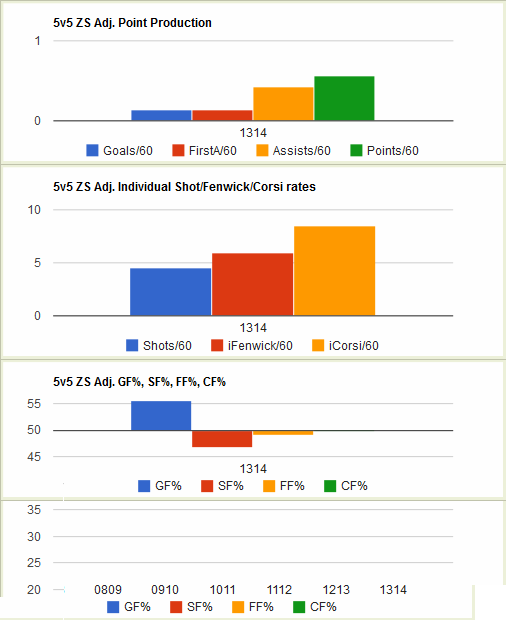 Key Stat: Schmidt had the third best Corsi Rel on the team (+3.1), trailing only Mike Green (his most frequent partner) and Dmitry Orlov. Despite his success on ice, Schmidt only played 11:04 after December 13.

Interesting Stat: The only two players that had better possession metrics away from Schmidt than with Schmidt (minimum 40 minutes together) were the top two centers, Nicklas Backstrom and Mikhail Grabovski. Literally every other player on the team had better numbers when Schmidt was on the ice. And he was sent to Hershey.

The Good: In his first full season as a pro, Schmidt wasn't expected to make the NHL roster, much less make an impact. Not only did Schmidt waste no time making the roster, debuting in the NHL on October 12 against the Colorado Avalanche, but Schmidt was one of the better performers on a defensive corps that was a liability all season long. Schmidt's smooth skating and confident puck play helped the Caps get out of their own zone, and allowed Schmidt to make plays at the point that few other Caps defenders have the skill set to make (see more below). In today's NHL, skating is at a premium, especially on the back end. Look at the teams still playing, and you'll see a lot of defensemen that skate and pass well, even if they aren't the biggest or most intimidating players. Schmidt does both well, and that's a big part of the reason the majority of Caps players had more success with Schmidt than without him.

Schmidt's goals-for percentage was third on the team (minimum 21 games played), and given that the point of the game is still to out-score the opposition, that was helpful. When Schmidt was on the ice, the Caps out-shot and out-scored the other team. He may not have the pedigree or the prototypical NHL defensive size or style, but don't over-think it, the Caps were a better team when he was on the ice than when he wasn't. And he was sent to Hershey, where his season all but ended due to a knee injury.

The Bad: Although Schmidt had good possession numbers at even strength, he wasn't a contributor on special teams, playing a combined :46 per game on the power play and shorthanded. The possession numbers are nice, but on a team that is so top-heavy on defense, the Caps need special teams contribution throughout the lineup, if only to give John Carlson the occasional blow. His defensive acumen isn't the strength of his game, and on a team with Alex Ovechkin, Green, John Carlson, and Orlov, how do you fit him on the power play? This team isn't deep enough to have the luxury of one-dimensional players on the roster.

Further, as far as one-dimensional defenders go, the Caps already have a glut of puck-movers who are suspect on D. Green, Orlov, Jack Hillen, and Connor Carrick can all do what Schmidt does (although only half of that group does it as well). The team needs a couple of defenders that can be trusted in their own end. Of course, if Schmidt could do that, he'd probably have played a bit more on the PK - the special teams unit the Caps need help on (especially given how uneven the penalty kill minutes were distributed last year).

Schmidt also benefited from a 102.9 PDO, driven by a higher on-ice shooting percentage than most of his teammates. Without that puck luck, his goals-for percentage would not have looked as good as they do. Granted, his possession numbers would indicate that his goals-for percentage would have probably been better than his teammates anyway, but with a small sample size it's possible that his possession numbers would have regressed and would not have looked as good if he had been in the NHL all season. It's possible Adam Oates saw a vulnerability in Schmidt's game and sent him to Hershey before the rest of the league caught on. I said "it's possible," stop laughing.

How many defenders on the team have the foot and hand skill to make this play? Two or three? And he was sent to Hershey.

The Discussion: Where does Schmidt fall on the defensive depth chart? Should he be penciled into the lineup on opening day (pending other acquisitions)? What kind of partner does Schmidt need to be paired with to succeed and what is the ideal usage for him next season? Does he have a future as an NHL player? Is that future in the Caps organization? What would it take for you to give him a "10" next year?