From Alzner to Wilson, we're taking a look at and grading the 2013-14 season for every player who laced 'em up for the Caps for a significant number of games during the campaign, with an eye towards 2014-15. Next up, Alex Ovechkin. 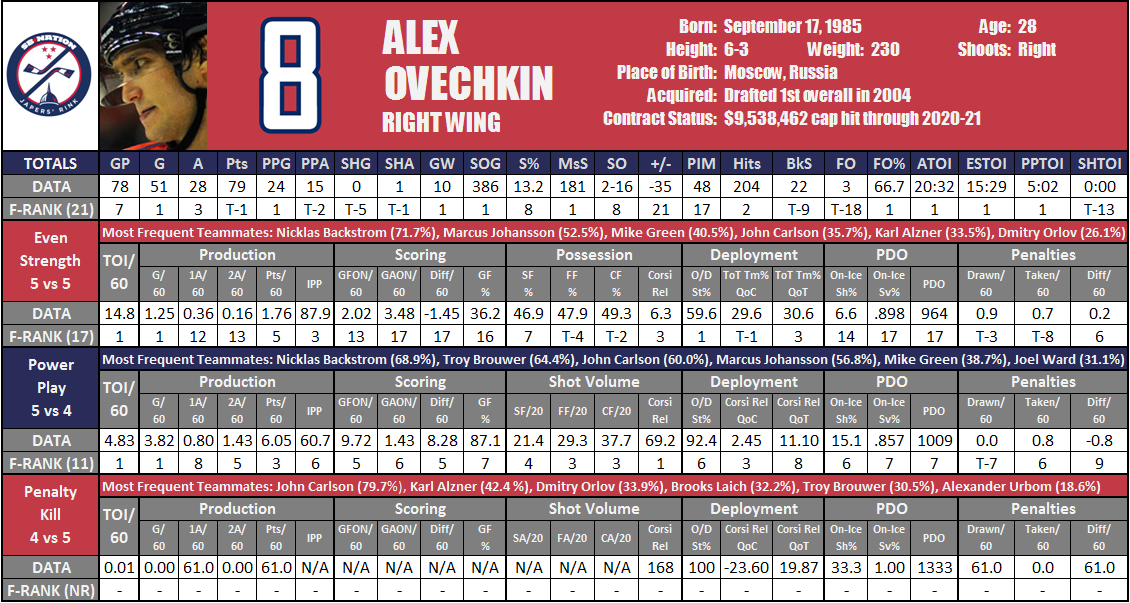 Ovechkin and his most frequent linemates (via Stats.HockeyAnalysis.com) and lines (via our own Muneeb): 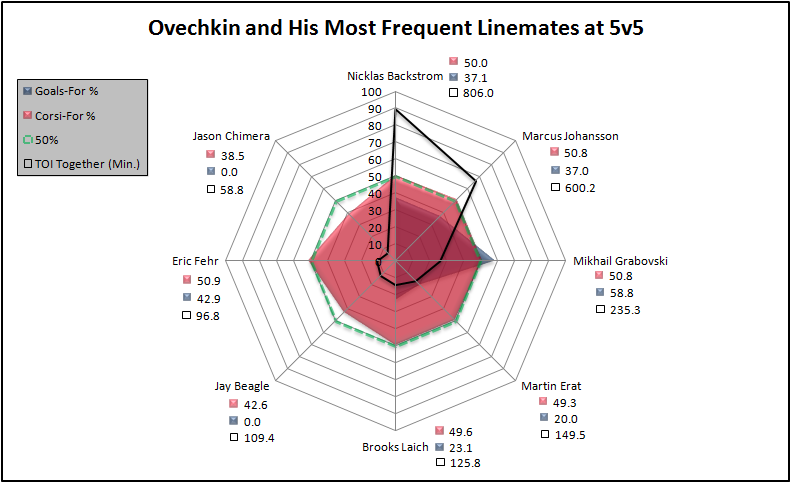 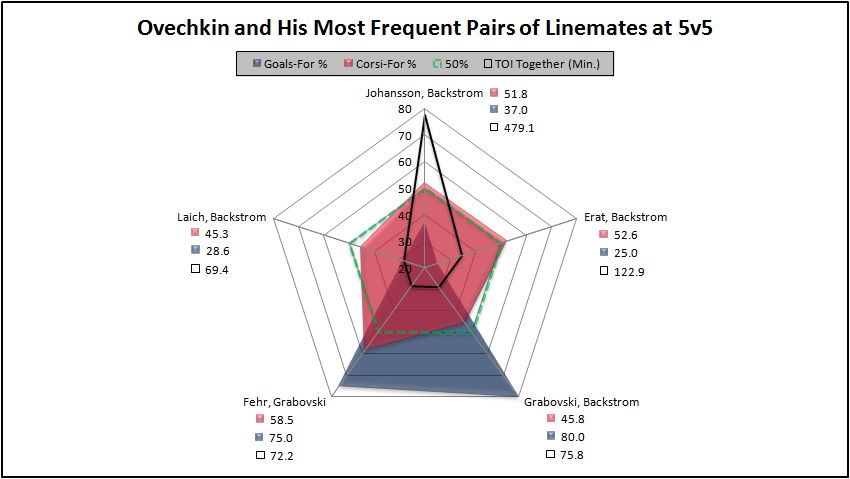 Ovechkin's Past Seven Seasons (via Stats.HockeyAnalysis.com):

Key Stats: For the fourth time in his nine-year career, Alex Ovechkin led the NHL in goals, reaching the 50-goal plateau for the fifth time.

Even more impressive, of the six other players to have led the League in goals four times or more - Charlie Conacher, Maurice Richard, Gordie Howe, Bobby Hull, Phil Esposito and Gretzky (all Hall-of-Famers, by the way) - none of them did so without multiple future Hall-of-Fame teammates during that fourth season:

The Good: Any reasonable discussion of Alex Ovechkin's 2013-14 season starts with his goal totals, and any reasonable discussion of his goal totals starts with the power-play (where Ovechkin played a League-high 93.2% of the Caps' total minutes). The Great Eight scored a franchise-record (and League-leading - by 50%) 24 times and helped the Caps to the second-best power-play efficiency in the League, passing Peter Bondra for the most extra-man tallies in team history (now 137) along the way. And teams knew what was coming, they just couldn't do much of anything about it - here's a look at the heat map of his power-play goals, via Sporting Charts: 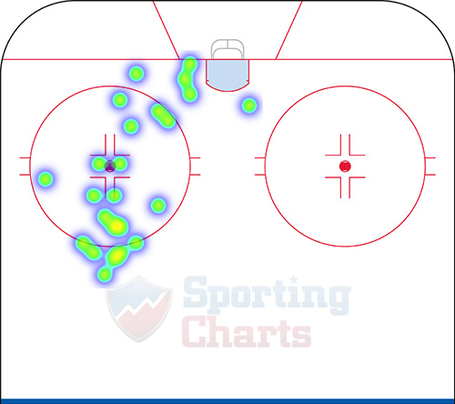 But it wasn't just power-play scoring for Ovechkin, who finished fifth in the League in even-strength goals (27), second in game-winners (10), and tied for first in overtime tallies (3). No one scored goals more at home than Ovechkin; no one scored more goals on the road than Ovechkin. When the dust settled after 1,230 NHL games, no one had put more pucks towards, on or in goal than Alex Ovechkin, and it wasn't really close.

Ovechkin's season included his 400th goal (sixth-fastest/seventh-youngest in NHL history to that mark) and 800th point (third-fastest behind Jaromir Jagr and Teemu Selanne among active-at-the-time players), and he's now just one more prolific season - 50 goals - behind Bondra for first in team history in that category (and he'll pass Bondra for the franchise lead in points with a dozen... so, by Halloween?).

And while Ovechkin's NHL season came to a disappointing finish, his hockey season ended on a high note, as he captained Team Russia to gold at Worlds - a sweet conclusion, to a somewhat bitter eight months of puck, overall.

The Bad: Perhaps you've heard that Ovechkin's plus-minus wasn't so hot in 2013-14. And while reasonable minds may differ as to the significance of the exact numbers, what drove them, and even whether or not it even matters how much or whether Ovechkin even bothers to defend, the bottom line remains that if you drew perpendicular axes with one running from "good" to "bad" and the other from "engaged" to "indifferent" and plotted Ovechkin's defense on your graph, it would be squarely in the worst quadrant. Did Ovechkin play less or worse defense this past season than in the campaigns that preceded it? Probably not. But unlike in those previous years, Ovechkin's shortcomings weren't as easily mitigated or masked by strong possession numbers, a high on-ice shooting percentage and/or a high on-ice save percentage (in fact, his PDO was the lowest in the League among forwards with at least 1,000 five-on-five minutes), and the result was that ugly minus-35.

Know what else doesn't help the ol' plus-minus? Going a month without an even-strength point, which is exactly what Ovechkin did in March: 15 games, no even-strength points. Granted, that includes a half-dozen games in which Jay Beagle was inexplicably skating as Ovechkin's center... but still, that can't happen. Not when the team is fighting for its playoff life. Not ever.

Ovechkin's even-strength production was pedestrian (but again, on-ice - read "teammates" - shooting percentage), his possession numbers unimpressive (but again, Adam Oates), and he somehow went 2-for-16 in shootout attempts (which, insofar as I can tell, is a record for the most failed attempts in a season). Has Alex Ovechkin become a one-trick pony? Paging Barry Trotz (although...).

And then there are the bigger picture failures in Ovechkin's 2013-14. There's Sochi. And missing the playoffs. And having another coach (and a general manager) dismissed because his team couldn't get the job done adequately. None of these things, mind you, are about one player's insufficiencies, but when you wear the letter and have the contract, you get a large portion of the blame - them's the rules.

The GIFs (by Capitals Hill):

Down three goals early (like, 11:07 into the game and "See ya, Braden Holtby" early) in the Caps' December 10 game against Tampa, Ovechkin scored that first goal to cut the lead to two. Later, he scored that second goal to cut the lead to one. Then the third to tie it. Then, with 33 seconds left in regulation, that fourth to tie it again. The Caps eventually won the game in a shootout, but, as has been the case so many times over the last nine seasons, they never would have had a chance if not for Ovechkin. Then again, he wasn't a plus on the night, so he probably had a bad game...

The Discussion: Is Ovechkin's future as a left- or right-wing? What will it take for him to once again be an effective five-on-five player? Is it important that he develop the defensive side of his game? What will Barry Trotz's biggest challenges be in dealing with Ovechkin? What would it take for you to give him a "10" next year?