If Mr. Trotz Comes to Washington...

All signs point to the Barry Trotz Era beginning in Washington... so what can we expect to see?

Share All sharing options for: If Mr. Trotz Comes to Washington...

Reports are circulating that the Caps are closing in on a deal with Barry Trotz to be the next head coach of the Caps. If true, it'll mark the first time since 1997 that they will have hired a head coach who has experience behind an NHL bench...which means for the first time since 1997, we'll also have a chance to look at a coach's history for a glimpse at what we might see here in DC.

So what can we expect from a Trotz-led Capitals team? Let's take a look at some potential questions - and hopefully provide some potential answers - about the man who could be the new bench boss:

"Trotz it is. Should we expect a return to defense-first hockey?"

Not necessarily. Trotz has made a point recently to note that he lets the players he’s given dictate the system he’s going to implement. True enough, in the two seasons in which Trotz had Paul Kariya and some other offensive weapons, the Preds were 11th and 5th in goals-per-game (and 6th and 4th in five-on-five goal ratio). In that second season, Nashville was third in the League in five-on-five goals.

"So maybe it’ll (finally) be the best of both worlds - a team that can score and defend?"

Not so fast. We don’t have "advanced" stats for those two Kariya years (2005-06 and 2006-07), but we do have "close enough," and Nashville’s five-on-five shots-for percentage was just under 47% in each of those seasons. To put that in perspective, the Caps’ shots-for percentage this past season was 46.4% and 47.2% in the shortened 2013 campaign. So while Nashville was scoring 53.9% and 56.2% of the five-on-five goals in their games, those rates were way out ahead of what we’d expect based on their puck possession numbers (thanks, Tomas Vokoun!).

"Oh. Well that’s ancient history and those first two post-lockout (the second one) years were goofy. How’d it go in the years in between?" 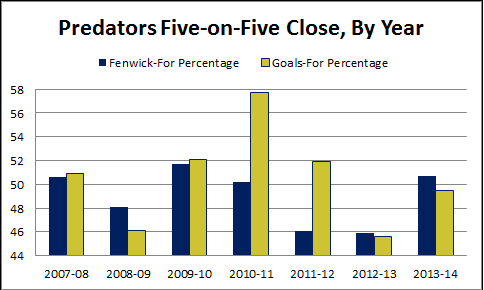 Yeah, you might have heard he had a pretty good stretch from 2010-11 to 2011-12. (But he’s just barely ahead of Braden Holtby in five-on-five close save percentage over the last four seasons, albeit in more than twice as many minutes, for what that’s worth.)

"So outside of a couple of down years - two of the last three - Trotz’s teams have had good-not-great puck possession generally and been slightly ahead of that in goal differential at five-on-five?"

Yeah, pretty much (guess they had a hard time overcoming the loss of Joel Ward after 2010-11). Over the past seven seasons, the Preds have scored 953 goals at even-strength and allowed 955 while posting a 49.1% Fenwick-For (as you might have guessed, their PDO was just a tick over 1000 at 1003). In close situations, those numbers get a little better, but are by no means eye-popping.

"And why should we believe that those two ugly seasons are the anomalies and not last year? Trotz’s teams have seemed to bounce around quite a bit from the 46% range to around 50%."

True enough, and over the past three seasons, the Preds have the 25th-best Fenwick-For percentage in close five-on-five situations. That stinks. As in "three spots below the Hunter/Oates Capitals" stinks. But here’s the kicker and a reason for optimism. Barry Trotz, it seems, has embraced analytics. Here’s J.R. Lind writing for the Nashville Post last September:

Throughout the offseason and into training camp, Predators Coach Barry Trotz has said he wants his team to get better at transitioning the puck, to focus on carrying the puck into the attack (rather than dumping it into the corner and chasing it down). During free agency, General Manager David Poile lauded the amount of shots (read our explanation of Corsi and its relationship to possession and success) his free-agent acquisitions produced and, in some cases, how well those new players carried the puck. It's an easy leap to make between [Eric] Tulsky's research, his relationship with the team and this new emphasis from the Predators decision-makers.

Go read that piece, because it’s super. But for the more visual learners among you, let's take another look at that chart above: 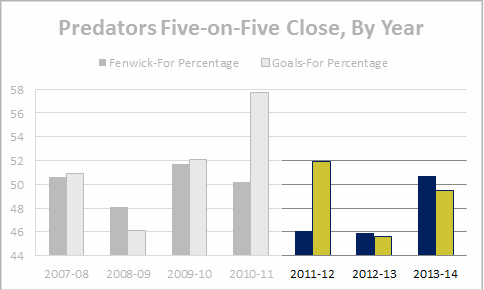 Note that it’s really the blue bars we’re concerned with… and that the article and Trotz’s new-found interest in analytics immediately pre-date the 2013-14 season. Barry Trotz, it seems, has chosen "adapt" over "die."

"Ok, so he can adapt. Can he do that with a team of artists, not plumbers?"

Ultimately, that's probably going to be up to the artists.

Bottom line: if the Caps can get to playing teams even at five-on-five (in terms of possession and goals) and keep their power play efficiency humming along, they’re going to win a lot more games than they have these past two seasons. Trotz may not have the upside that some other options might, but it’s hard to see him not making this team better immediately.