From Alzner to Wilson, we're taking a look at and grading the 2013-14 season for every player who laced 'em up for the Caps for a significant number of games during the campaign, with an eye towards 2014-15. Next up, Dmitry Orlov. 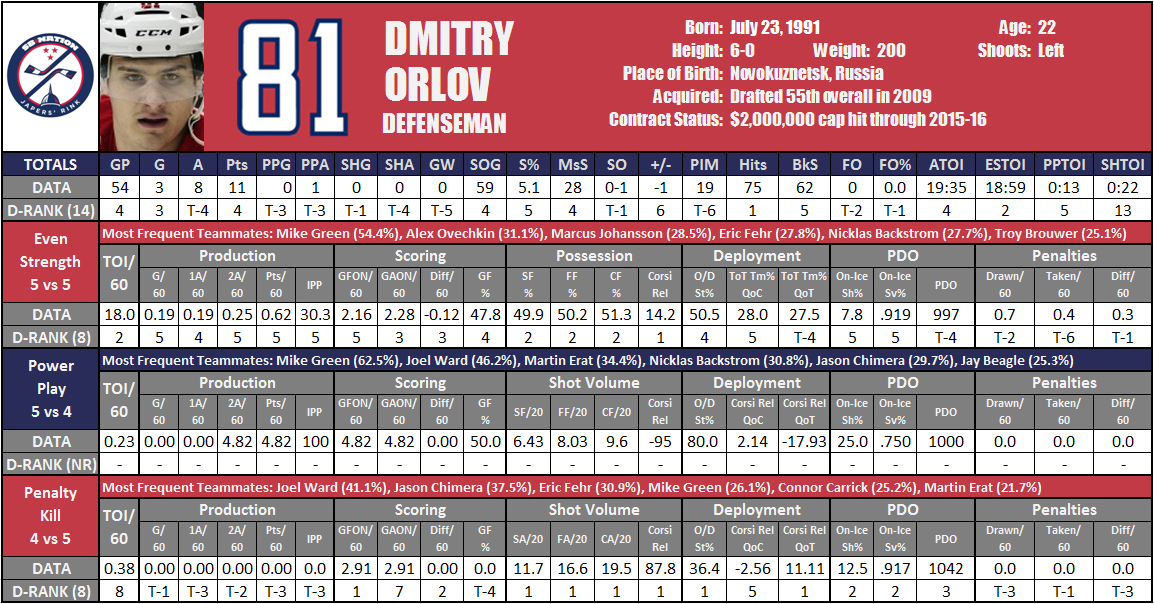 Orlov and his most frequent defensive partners, via Stats.HockeyAnalysis.com: 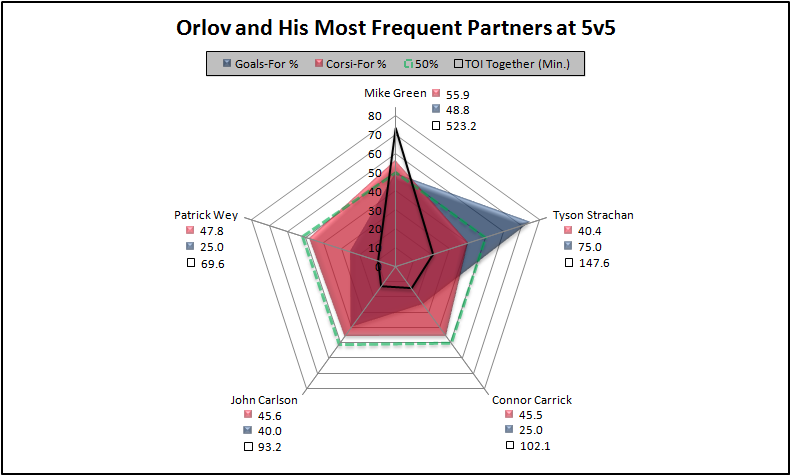 Orlov's Past Three Seasons (via Stats.HockeyAnalysis.com; missing data due to failure to meet the minimum ice time): 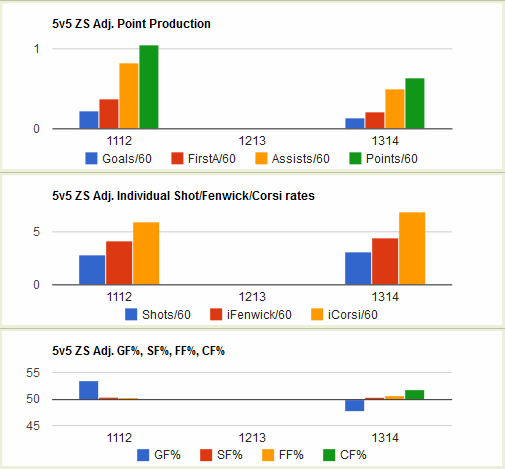 Key Stats: 1,058:17, Orlov's total time on ice for 2013-14, good for fourth overall on the team among defensemen and indicative of his having attained a spot in the Caps' top-four. While this total is a whopping 983:34 more minutes than he played last season (partly due to a concussion and partly due to Oates) it's also an increase of 45:48 over 2011-12, a season in which Orlov played six more games. After his struggle to stay healthy and gain the trust of the coaching staff, this was a major accomplishment for Dmitry, and it helped assuage Orlov's frustration over his lack of playing time in 2012-13, and his yo-yoing between Hershey and Washington to start this season.

Interesting Stats: +6 Penalty Differential, tops among Caps defensemen this season. Orlov drew 14 penalties this season, tied for second on the team with John Carlson, and only two behind Mike Green. Despite his brush with NHL justice over his hit on Brayden Schenn, Orlov was also pretty good at staying out of the box. He took 8 penalties this season, fewer than any other Caps' defenseman except fellow young puck-carrier Nate Schmidt. It's almost as though having the puck on your stick is a good thing.

The Good: On a team that struggled mightily with puck possession, Orlov was a positive standout. His 51.9 Corsi-For percentage at even strength led the Caps, and his 50.8 Fenwick-For percentage was second on the team behind his frequent defensive partner Mike Green. Orlov certainly benefited from having Green to his right on the blueline, as his Corsi-For percentage dropped to 45.1 without Green. However, this drop-off was due in part to Orlov's primary partners other than Green: Tyson Strachan and Connor Carrick. Additionally, Green saw his Corsi-For percentage drop from 55.9 with Orlov, all the way down to 48.5 without him.

Orlov accomplished these outstanding (relatively anyway) possession stats through a combination of poise with the puck and aggressiveness at the bluelines. While we didn't track zone-entries or zone-exits for the Caps this season, Orlov would likely be near the top among defensemen when it comes to carrying the puck out of the defensive zone or into the offensive zone. As Rob noted back in January,

The breakout has been a concern all year, but Orlov is quickly becoming one of the best Capitals defenders at getting pucks out and up.

Orlov was also aggressive without the puck, frequently pinching in to hold pucks in the offensive zone or generate scoring chances, and leading all Caps defensemen in hits with 75, despite playing only 54 games. Orlov's physical play makes his low penalty total particularly impressive.

Since being paired up a month ago, Green and Orlov have seen both their fortunes start to turn for the better.

The Bad: Orlov's aggressiveness was, as it often is, a double-edged sword. While Orlov's even-strength goals-against rate of 2.3/60 was middle-of-the pack, the team's even-strength save percentage when he was on the ice was 91.9%, sixth-worst on the Caps and second-worst among defensemen. There's a lot of research that suggests players have a limited ability to control the percentage of shots that become goals when they're on the ice, but Orlov's aggressive play, and particularly his aggressiveness at the offensive blueline, certainly seemed to create a large number of odd-man scoring chances for the opposition.

This tendency might not have been quite so damaging if the Caps had been able to pair Orlov with a conservative, defense-first partner. Unfortunately, because of the roster's construction and Adam Oates obsession with lefty-righty pairings, Orlov's most frequent partner was Green, who has never once been considered a conservative, defense-first player.

Like his fellow young Capital Tom Wilson, Orlov is generally good at delivering hits that are punishing, but clean... except, apparently, when it comes to hitting Brayden Schenn. Remember the earlier comment about the timing of his penalties? Well, the hit on Schenn in the middle of the third period of a game in which the Caps led by two was particularly costly. The Flyers scored once on the resultant five-minute major to pull within one, then scored again to tie the game with a minute left to send the game to overtime, wherein they scored yet again to steal two points from the Caps in a tight playoff race. According to ExtraSkater, the Caps' probability of winning that game prior to the goal the Flyers scored while Orlov was serving his major was 99%. In a season of disappointment, it's a fool's errand to pick out any one event that led to the Caps missing the playoffs, but if you really had to pick one, this wouldn't be a bad candidate.

Orlov's total time on ice this season wasn't just his "key stat" because it reflected his position in the top-4, it was also crucial because it healed a rift that seemed to be growing between Orlov (more precisely, Orlov's agent) and the Caps organization. When this season began, Orlov spent much more time driving between DC and Hershey on I-83 than he spent in a Caps sweater. As a result, his agent Mark Gandler demanded a trade for his client. Orlov was the third Caps player to ask to be moved, but he's the only one that remains a Capital. Not only that, but he signed a two-year, $4 million contract to stay in the District. If he hadn't attained a spot in the Caps' top-4, this Rink Wrap might not have happened at all.

Finally, Orlov managed to stay healthy this season, which was a welcome departure from the 2012-13 season in which he suffered from a concussion reported upper-body injury. Unfortunately, Orlov's luck ran out this spring; he broke his arm playing for Mother Russia in the world championships. The injury doesn't appear to be too serious, and Dmitry should be in camp and ready to play this fall.

This goal, assisted by Eric Fehr and Joel Ward, brought the Caps within one in a game versus the Flyers in December, which the Caps would go on to win 5-4 in a shootout.

The Discussion: Orlov occupied a spot in the Caps' top-4 this season, but that was partly by default, since the organization lacked any other acceptable left-shooting options to pair with Mike Green. Now that Oates is gone and change might be coming to the roster, what is Orlov's role going forward? Is he still a part of the Caps' top-four? Should he still be part of a high-risk/high-reward pairing with Mike Green? Should his outstanding puck-carrying skills and slapshot earn him some time on the power play? How does his new contract affect your expectations of his play? What would it take for Orlov to earn a "10" next year?