From Alzner to Wilson, we're taking a look at and grading the 2013-14 season for every player who laced 'em up for the Caps for a significant number of games during the campaign, with an eye towards 2014-15. Next up, Brooks Laich. 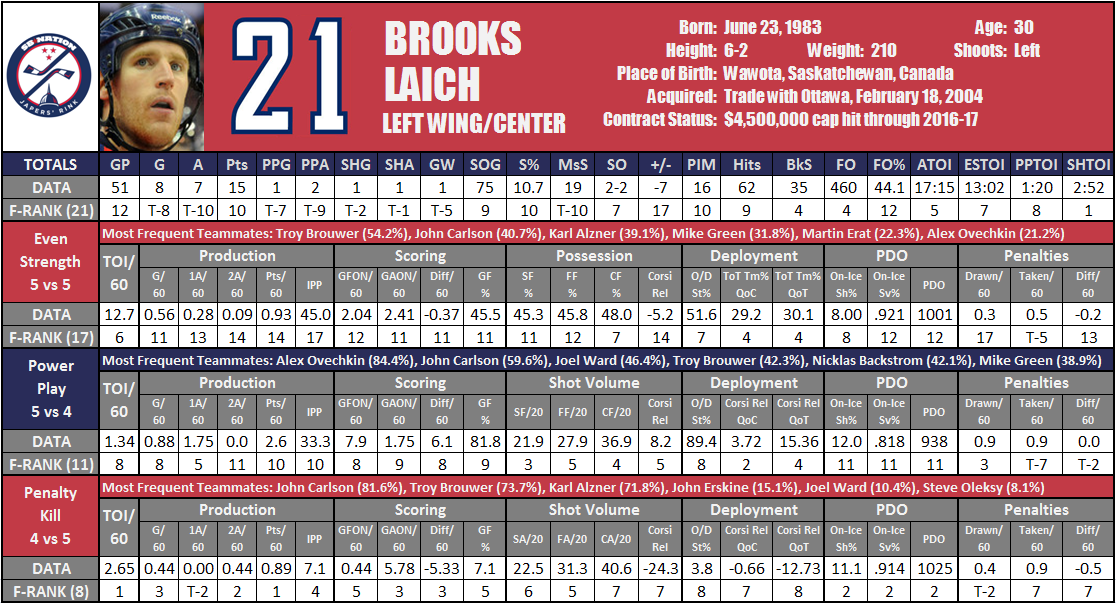 Laich and his most frequent linemates (via Stats.HockeyAnalysis.com) and lines (via our own Muneeb): 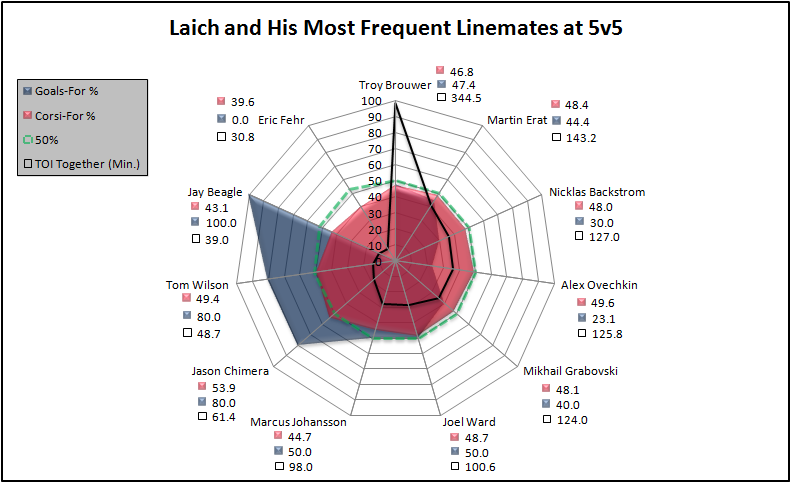 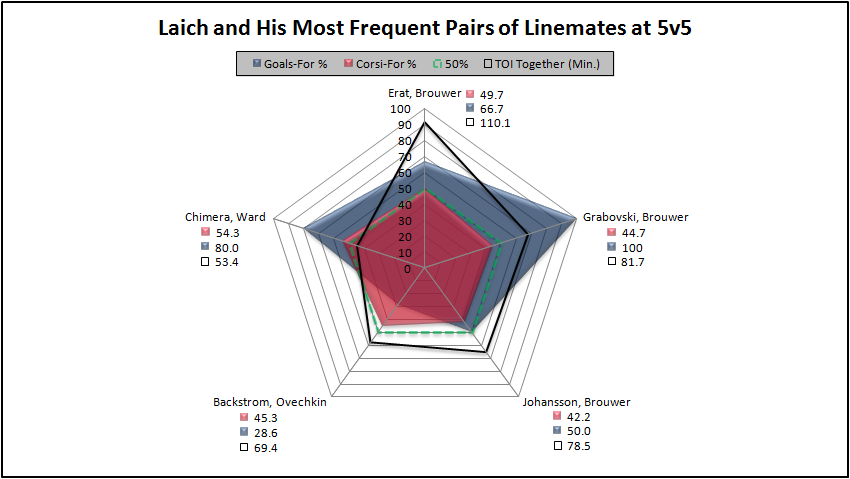 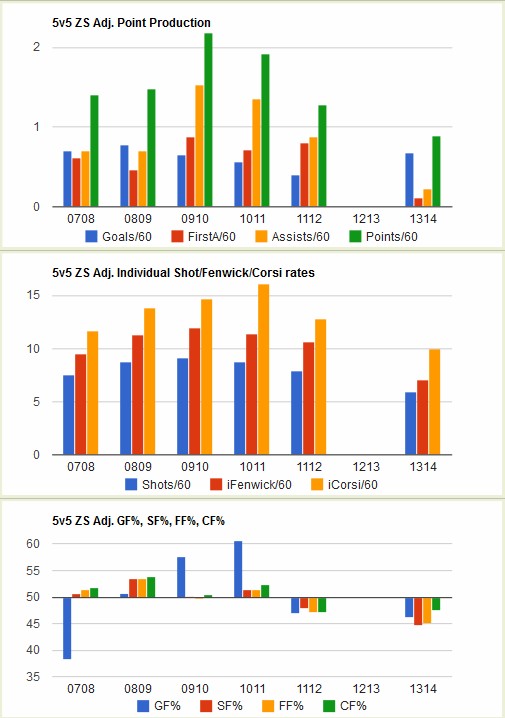 Key Stat: Laich has played in just 60 of the Caps' 130 games over the last two seasons.

Interesting Stat: Laich won just 44.1% of his faceoffs this season, the lowest percentage of his career.

The Good: While he saw his season cut short by a lingering groin injury, Laich did manage to put up some points in his 51 games in 2013-14 - particularly at even strength, where he picked up ten of his 15 points on the season. That resulted in an even-strength goals-per-60 rate of .569, his highest since 2008-09 (.668), and his overall shooting percentage of 10.7%, while one of the lower rates among forwards, was actually Laich's highest percentage since 2009-10.

Laich continued to be one of the team's most frequent penalty-killers, leading all Caps' forwards in shorthanded ice time with just under three minutes per game, as well as shorthanded TOI/60. He was able to log so many minutes on the penalty kill in part because he was rarely in the penalty box himself; Laich took just six minor penalties on the season, with only Marcus Johansson picking up fewer among forwards who played at least 20 games for the Caps this season. And along the way he managed to pick up a shorthanded goal and assist, tying Karl Alzner for the team lead with two shorthanded points on the season.

The Bad: Of course, a couple of points while down a man doesn't balance out the fact that he simply didn't produce much in the way of offense overall in 2013-14. He was in the bottom half of Caps' forwards in even-strength goals-, assists- and points-per-60 (with only Aaron Volpatti and Tom Wilson having a lower points/60 rate at even strength than Laich, and only Volpatti, he of the zero even-strength assists, with a lower assists/60 rate). Those weren't just bad when compared to the rest of the team; they were career-level bad, as well. His overall goals-per-60 rate was the fourth-lowest of his career, and his overall assists- and points-per-60 were the worst.

A look at a couple of Caps forwards, their roles and production

For a player who has prided himself on being a "jack of all trades", able to help out in all situations, Laich wasn't all that effective in any of them this year. Aside from his lack of point production at even strength, he averaged 1:20 of power-play ice time and yet had only three points with the extra man. He led forwards in average shorthanded ice time, and yet only Troy Brouwer was on for more power-play goals-against over the course of the season with 19 to Laich's 17 - and Brouwer played in 31 more games.

Possession-wise, the picture doesn't get much better. Among forwards who played at least half the season, Laich's goals-for percentage was the sixth-lowest, and he was below 50% in Corsi-for, Fenwick-for and shots-for percentage - his lowest in the last six seasons in each of those categories.

Of course, some of that can be traced back to an issue that has been discussed a time or two before, and that was the persistent use of Laich on a line with Brouwer. Brouwer was Laich's most frequent linemate this season, with 54.2% of Laich's ice time taken with #20 on the ice - which resulted in a CF% of 47.7%, compared to 51.3% away from Brouwer. How bad is that? Consider that in nine seasons with the Caps, Laich has skated with 25 forwards for a total of at least 100 minutes... and his CF% has only been worse with two of them, Mike Knuble (46.8% over 580:33) and Marcus Johansson (45% in 523:44).

But good call keeping them together for so long, Coach.

And of course, the biggest 'Bad' in a season of not-so-good for Laich - the fact that he once again saw his season cut short by that lingering groin injury. All told, Laich missed 31 games, including the last 14 games of the season after yet another "procedure" - he was simply never able to find his stride, the injury flaring up and knocking him out of the lineup just about every time he got a bit of the rhythm back in his game.

While he did miss quite a bit of the 2013-14 season, there were glimpses of the old Laich scattered throughout. Take this play to open the scoring in what would be an eventual comeback shootout victory for the Caps. Driving the net, following up on his own rebound, fighting off two defenders to backhand the puck into the net...that's old-school going to the bakery, my friend.

The Discussion: How concerned are you about the injuries that have plagued Laich since the lockout? Do you see Laich as someone you want the team to hang on to in hopes that he regains his health, or would you want the team to try to move him this summer... and is that even a possibility, considering his cap hit, contract, age and recent health issues? What would it take for Laich to earn a 10 next year?