From Alzner to Wilson, we're taking a look at and grading the 2013-14 season for every player who laced 'em up for the Caps for a significant number of games during the campaign, with an eye towards 2014-15. Next up, Jack Hillen. 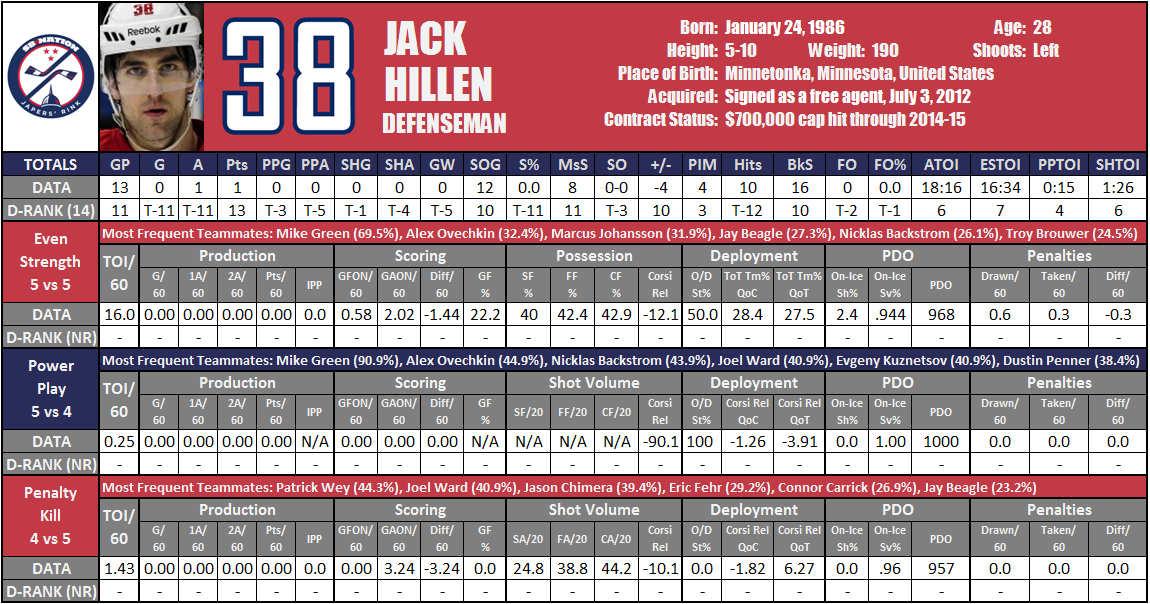 Hillen and his most frequent defensive partners, via Stats.HockeyAnalysis.com (and yes, the chart is funky - blame small samples and poor results): 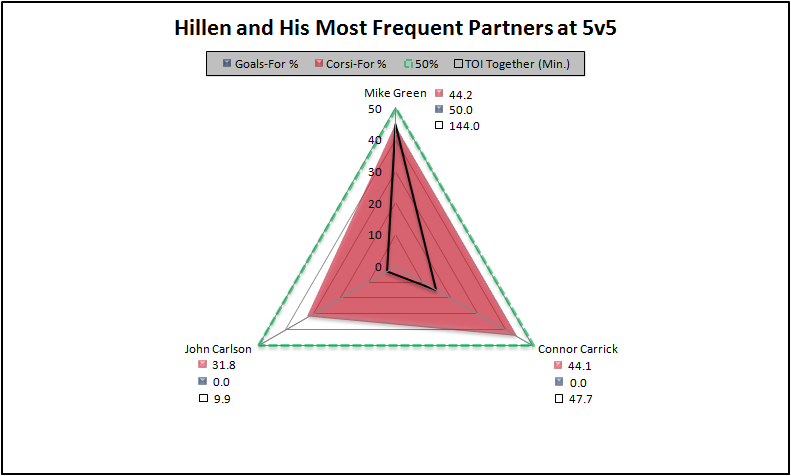 Hillen's Past Six Seasons (via Stats.HockeyAnalysis.com; missing data due to failure to meet the minimum ice time): 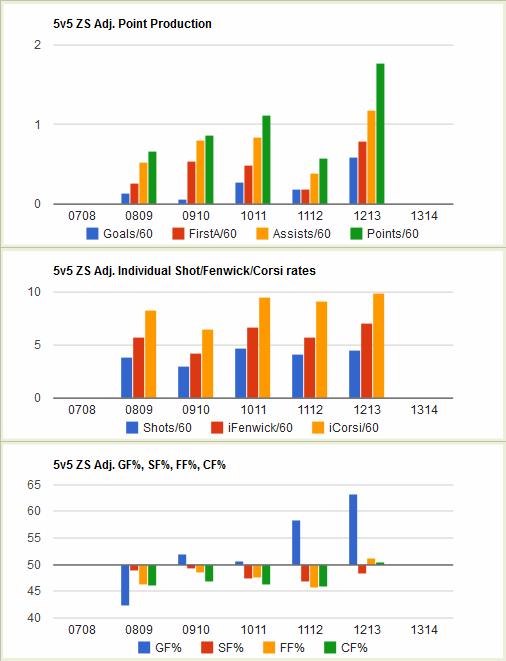 Key Stat: 23:01, the total time Jack Hillen spent on the ice in 2012-13 and 2013-14 before being placed on injured reserve. After missing 25 games last year when Vincent Lecavalier broke his ribs on opening night, Hillen managed to make it part way through the Caps’ second game before succumbing to a fractured tibial plateau courtesy of Calgary’s Lance Bouma. Hillen gamely returned to the ice in March and managed to play in 11 games before sustaining a concussion after colliding with Alexander Ovechkin in the March 25th game versus the Los Angeles Kings, effectively ending his season. (And it’s not as though that was the first time Ovi left Hillen worse for wear.)

Interesting Stat: Hillen's 968 PDO was second-lowest on the Caps, ahead of only Ovechkin (apparently they were colliding at the bottom of this table as well).

The Good: Provided he makes it back to the NHL next year (and he has one more year on his contract at $700k), Hillen really ought to be the Caps’ nominee for the Masterton Trophy. His return to the ice this year was impressive given the severity of his injury and the difficult nature of his recovery. Hillen deserves a lot of credit for dedication to hockey and his teammates that he demonstrated in coming back to join the team in the midst of a lost season. A lesser (read: sane) man might have just waited for 2014-15.

The Bad: Finding negative things to say about Hillen’s season is a bit like Mary Todd Lincoln complaining about the costumes in Our American Cousin. Nevertheless, when he was on the ice, Hillen was atrocious. His Corsi-For percentage was 42.9%, better than only Tyson Strachan and Julien Brouillette among Caps defensemen. His poor possession stats are particularly head-scratching, since he was often paired with Mike Green, who was the team’s most consistently positive defenseman in terms of puck-possession.

Hillen’s aforementioned low PDO combined with the team’s poor puck-possession when he was on the ice resulted in an ugly 5-on-5 goals-for percentage of 22.2%, by far the worst on the team (granted, that's a nine-goal sample). Injuries aside, when Jack Hillen was on the ice for the Caps this season, bad things happened and good things rarely did (he managed only one point on the campaign).

The Discussion: By all rights, Hillen had a rough season. He missed 69 games due to injury, and his performance was poor during the handful of games for which he was healthy. However, he was originally signed by then-GM George McPhee to add puck-moving depth to the defense, and he largely met those expectations last season… when healthy. He was a positive puck-possession player and formed an effective tandem with Mike Green. In only 23 games last season, he put up the third-highest point total by a Caps defenseman. Therefore, some questions for his Rink Wrap are: