From Alzner to Wilson, we're taking a look at and grading the 2013-14 season for every player who laced 'em up for the Caps for a significant number of games during the campaign, with an eye towards 2014-15. Next up, Mike Green. 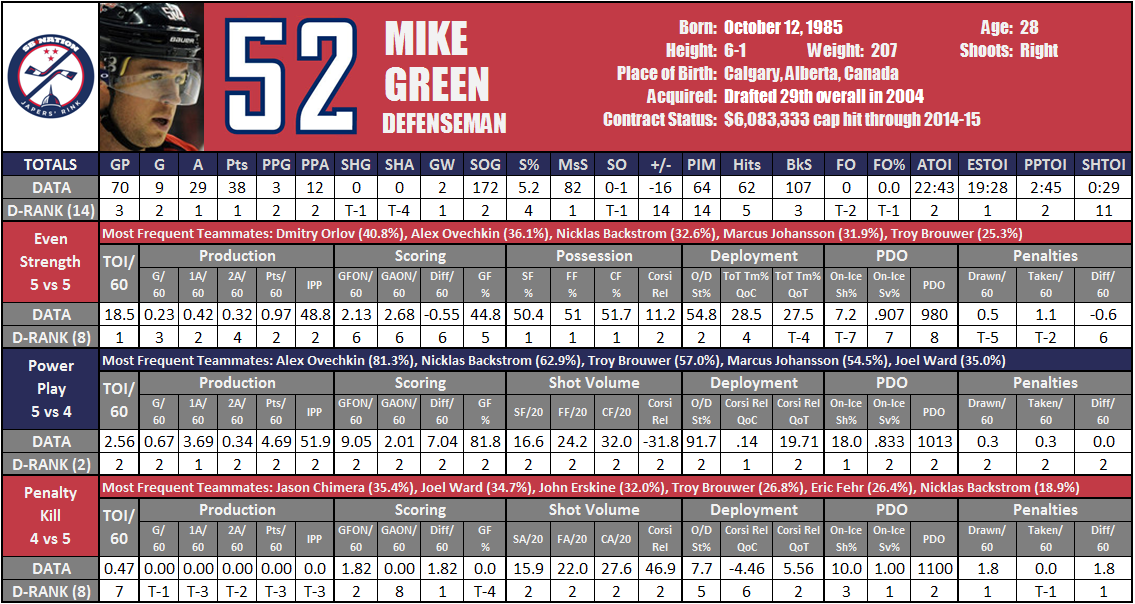 Green and his most frequent defensive partners, via Stats.HockeyAnalysis.com: 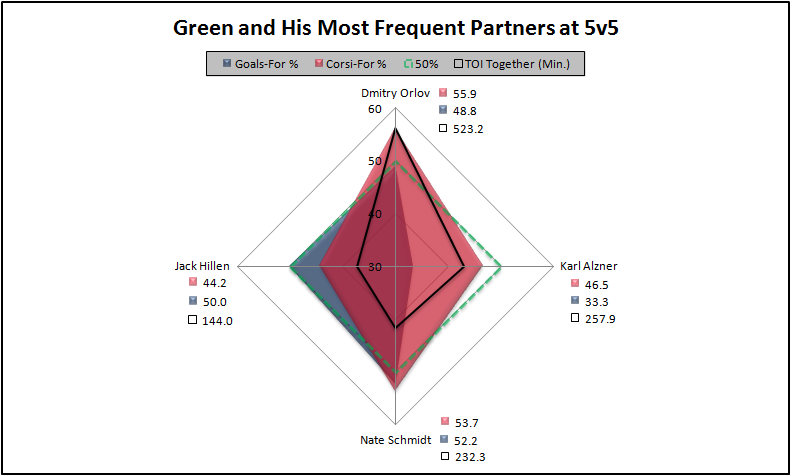 Green's Past Seven Seasons (via Stats.HockeyAnalysis.com): 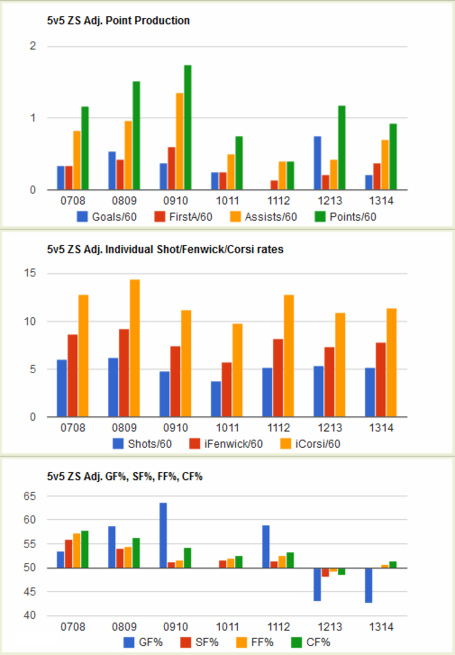 Key Stat: Green finished the season with a Corsi-For (CF) percentage of 51.7%, leading all Caps in that department.

The Good: Considering how heavily the Caps relied on the power play this season, and how successful Green has been with the extra man over the course of his career, it might be somewhat surprising to note that Green was actually pretty strong at even-strength during the 2013-14 season. Over half of his 38 points came at even strength, and he finished the year with 17 even-strength assists, something that had been absent from his game in recent years; in fact, it marked his highest even-strength assist total in four seasons. He also had a CF% at or above 50% in 42 of the 70 games in which he played, and at least 55% in 27 of them - all of which contributed to him finishing the season with the team's highest cumulative CF% (as well as FF% and SF%).

One of his best even-strength performances took place on January 28th in a win over the Sabres, a game which featured three even-strength points by Green - including his 100th career goal, followed shortly after by the overtime game-winner. With that milestone goal, Green became just the 11th active defenseman to score at least 100 goals in his career, the 80th all-time, and one of the twenty fastest blueliners to hit the century mark. And with 9 goals and 38 points on the year, Green now sits at sixth all-time among Caps' defensemen in scoring (and fourth in goals).

Whomever the Capitals hire as the new general manager, there is work to be done to turn the team around. Could that process of revitalization start with moving one of the roster's mainstays in the post-lockout era?

Beyond all that, one of the best aspects of Green's 2013-14 season was likely the fact that, while he did sustain some injuries this year, he still ended up playing in 70 of the 82 games. Amazingly enough, that marks the fourth-most games he's played in a single season in his career, and the first time he's cracked 70 games since 2009-10 (when he appeared in 75). Good news on a personal level for the oft-injured Green... and also pretty necessary on a team level, with only four of the 14 Caps' defensemen playing in even as many as 50 games this year.

Finally, it's worth noting that Green was most effective when paired with Dmitry Orlov and Nate Schmidt, and they were at their best when paired with him... making one wonder why we didn't see more of those potent duos, particularly Green and Schmidt. Add it to the list...

The Bad: He certainly moved up the franchise ranks this year in terms of point-production, but Green's offense sputtered this season... and for the first time in a long while, it wasn't because he'd missed so many games with injuries. He registered just nine goals on the season, which is three fewer than he had in 2012-13 when he played only 35 games (likely due in part to a ridiculously low shooting percentage of 5.2%, the third-lowest of his career). He finished with just 12 more points overall than he had last season, as well, in twice as many games.

And while he did lead the team in even-strength CF%, FF% and SF%, the chances that were directed toward the net when he was on the ice tended to go in fairly often, and Green was a frequent subject of our "Moments That Mattered" series... and not always in a good way. He ranked 14th in even-strength GF% (fifth among Caps' blueliners), which contributed to the lowest plus-minus of his career. That's obviously not all on him, of course, but Green has historically been able to balance out a bit of a high-risk element in his own end with a boost in scoring at the other end, and nine goals in 70 games is very un-Green-like.

It also didn't help matters that he was a bit more penalty-prone than usual, logging his second-highest PIM total (including a particularly memorable outing against the Lightning) and ranking third among Caps' defensemen in penalties-taken/60. Not great... especially considering that the two guys ahead of him on that list usually took their penalties in five-minute increments.

It's not often that Mike Green will pass up the chance to shoot from in front of the net (a big part of why he's been such a successful goal-scorer in the first place, since his shot happens to be a pretty good one). On this particular play, however, he showed great awareness and better hands to acknowledge the goalie's position and take a walk around the net. With a couple of bodies causing chaos in front of the net, Green was able to tuck the puck past Jhonas Enroth for the go-ahead goal - and the 100th of his career.

The Discussion: After six up-and-down seasons with the team, is it time for Green and the Caps to part ways, or should the two sides at least finish out the final year of his contract? How much of Green's offensive woes this season do you pin on him, and how much on the coaching staff and/or systems used this season? What would it take for Green to earn a 10 next year?