From Alzner to Wilson, we're taking a look at and grading the 2013-14 season for every player who laced 'em up for the Caps for a significant number of games during the campaign, with an eye towards 2014-15. Next up, Troy Brouwer. 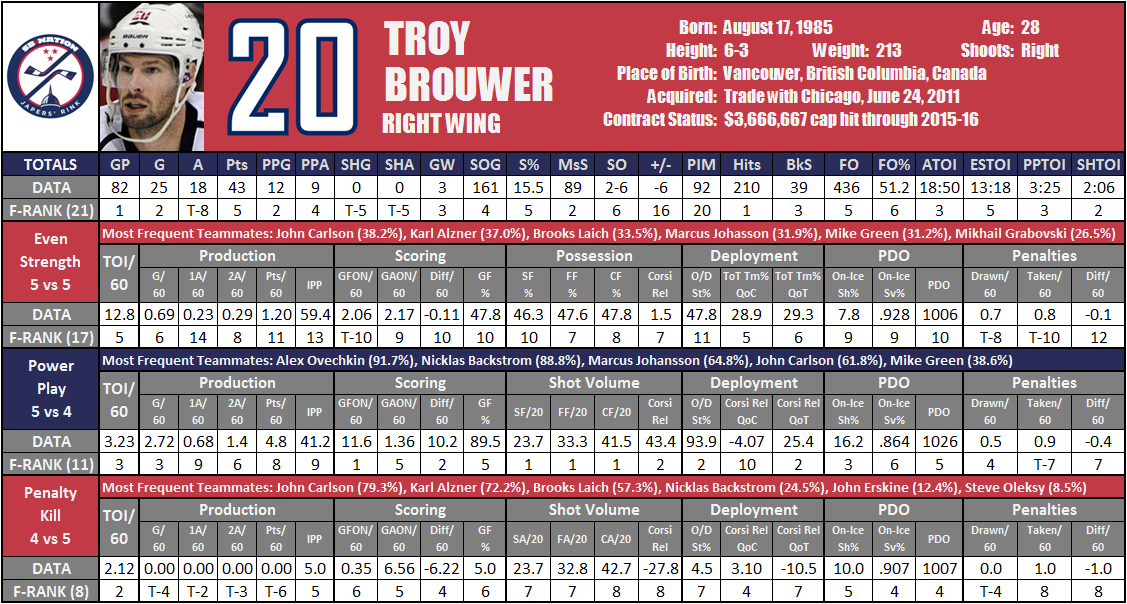 Brouwer and his most frequent linemates (via Stats.HockeyAnalysis.com) and lines (via our own Muneeb): 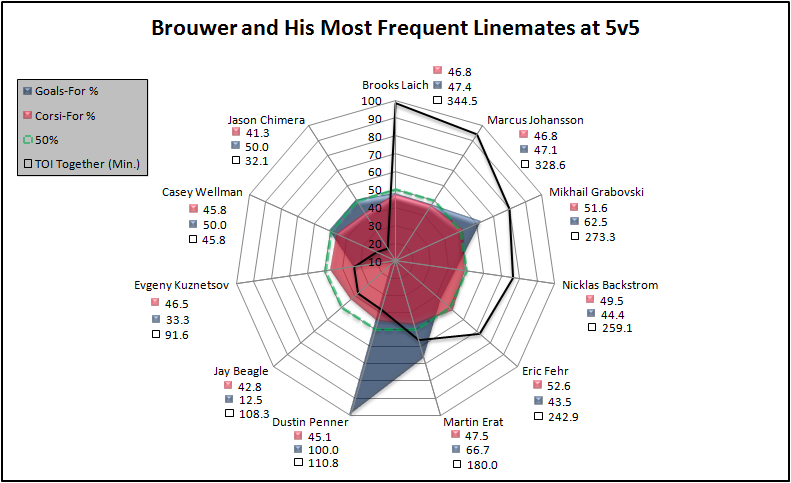 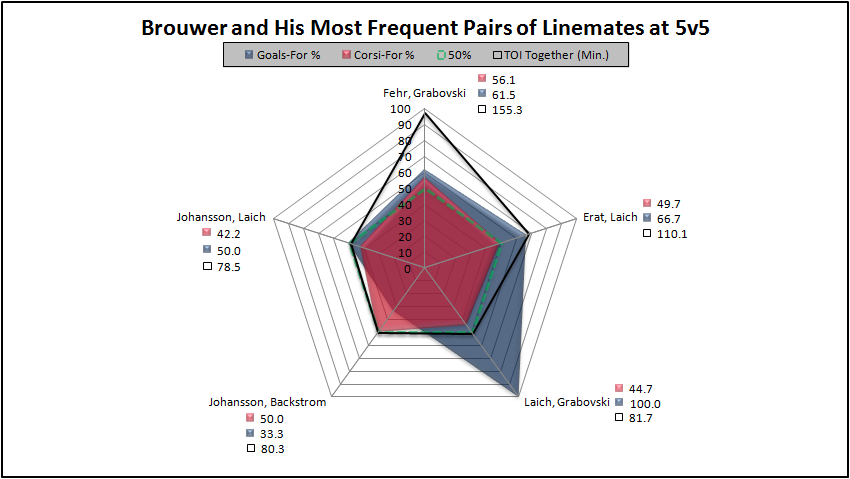 Brouwer's Past Six Seasons (via Stats.HockeyAnalysis.com): 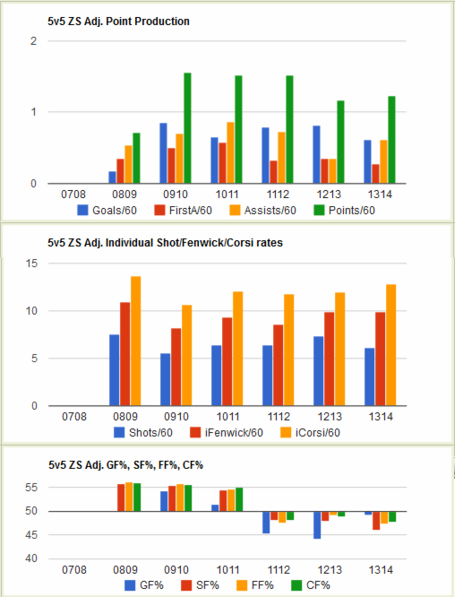 Key Stat: Brouwer's 25 goals ranked second on the team, trailing only (who else?) Alex Ovechkin.

Interesting Stats: Brouwer won 51.2% of the faceoffs he took this year, the third-highest win percentage on the team among forwards who took at least 200 draws (trailing only Jay Beagle and Mikhail Grabovski in that department). Over the course of the season, Brouwer took a total of 436 faceoffs - 67 more than he'd taken in his six prior seasons combined, and 10 more than Eric Fehr, who actually played as a center this year.

The Good: The lockout-shortened 2013 season saw Brouwer put up 19 goals, in part thanks to an unsustainably high shooting percentage and a ton of power-play time, so the expectation was for his numbers to come crashing back down to earth this year. The drop off wasn't nearly as big as some would have predicted, though, with Brouwer putting together a pretty impressive 2013-14.

His 25 goals set a new career high, marking just the second time in his seven seasons that he's cracked the 20-goal mark (and the first as a Cap), and he added personal-best numbers in shots on goal, points and power-play goals as well. Brouwer's overall and power-play goal totals ranked second behind only Ovechkin, and his point total checked in as the team's third-highest behind Ovechkin and Nicklas Backstrom - all while getting the least favorable zone starts of the top-six forwards.

As was the case last year, he benefitted from a lot of power play time (third-highest PP TOI of any forward), but just like last year he made it count and ended the year with the highest power-play GFON/60. He was decent at even-strength, as well, with 22 of his 43 points scored at five-a-side and a slight increase in his even-strength assists- and points-per-60 over last season. And those 43 points were picked up at a fairly consistent rate; only twice did Brouwer go more than four straight games without a point, including a scorching pace in the second half of the season.

The Bad: It wasn't all sunshine and roses for Brouwer, of course. The fact that almost half of his points - and his goals - came with the extra man was just part of a larger problem for the team, which was a lack of even-strength scoring. Of the team's 17 forwards, Brouwer's GFON/60 at even-strength ranked 11th - which probably isn't what you want for a top-six forward - and he saw his SF%, FF% and CF% all drop from last year. And while he was relied upon to skate big minutes on both the power play and the penalty kill, the latter was at times a problem, as he was on for more power-play goals-against (19) than any other forward.

He also got off to something of a rough start this year. Only eight of Brouwer's 25 goals were scored in the first half of the season; he went 35 games before picking up his first multipoint game of the year  (something he repeated seven times in the second half). Granted, some of his difficulties can be traced back to the insistence by Adam Oates of putting Brouwer on a line with Brooks Laich for much of the first half of the season, resulting in poor possession numbers (and by extension, a lack of offense) for both.

Brouwer scored some pretty nice goals this year. Some really nice goals. Some important goals. And yet... let's be honest, not all of the most memorable moments of the season for #20 were on the ice (as has been the case in the past... quite a dancer, that Troy Brouwer). For this was the season that brought Brouwbombing into our lives - and we're better people for it.

The Discussion: Brouwer has one more year remaining on his contract with the Caps - do you see him being part of the team going forward, whether in the short- or long-term, or is he someone the Caps should look to move? Do you think his power-play success has simply been a product of a great system and opportunity, or is there something about Brouwer that allows him to excel there? What would it take for you to give him a "10" next year?