Alex Ovechkin: The Plus and the Minus in Context

The Peerless takes a look at Alex Ovechkin's place in the plus-minus firmament.

Share All sharing options for: Alex Ovechkin: The Plus and the Minus in Context

According to the International Ice Hockey Federation, the sport of ice hockey as we know it dates back to the 19th century when James G. Creighton, a native of Nova Scotia who moved to Montreal to study and work in engineering, organized the first indoor hockey match in Montreal in March 1875. Rumor had it he finished a plus-1 in his team's 2-1 win over a team led by Charles Torrance.

And that leads us to "plus-minus," once among the most respected measures of an individual player's two-way skill on offense and defense, and now one of the most reviled statistics as possession metrics have gained a place in the analysis of individual and team performance.

Reviled, that is, unless you happen to be a right-winger playing for the Washington Capitals.

No, we are not speaking of Joel Ward, who happens to be a "plus" player for the Caps at the moment, leading the active members of the team in fact (plus-4), or even rookie Tom Wilson, who stands "even" on the plus-minus meter.

We are speaking, of course, of Alex Ovechkin, who as of April 3rd found himself alone in 862nd place among 862 skaters in the plus-minus metric (minus-36). Having said that, let us get one thing out of the way at the top. "Plus-minus" is an imperfect measure if you are trying to assess an individual's two-way performance on ice. It is, after all, the product of his being on the ice, but also his teammates. As such, there are many things that can lead to a poor, or a good plus-minus figure: quality of teammates, quality of opposition, the player's performance, simple blind (if improbable) good or bad luck over time. No player completely owns his plus-minus. He shares it with whom he plays and those he plays against. However, since so much attention has been given to Ovechkin's plus-minus numbers, we are going to look at precisely that -- those numbers.

Mind you, this is a player who once finished a season at plus-45, one of only two forwards since the 2004-2005 lockout to finish that high in plus-minus (Thomas Vanek was the other). Such a precipitous fall from the heights of plus-minus to the lows begs the question, is Ovechkin's tumble from plus-45 in 2009-2010 to minus-36 (and counting) this season remarkable in an historical perspective? How does it rank with other tumbles from those, or greater heights?

Funny you should ask: 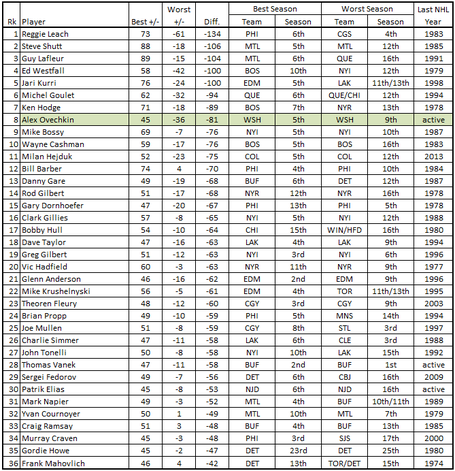 The chart above reflects those wingers who, in the modern era of hockey (dating from 1967-1968 expansion, which was also the first season in which the NHL began recording "plus-minus" as an official statistic) compiled a plus-45 or greater in a single season, corresponding to Ovechkin's best year. We looked at those wingers' best plus-minus year and compared it to their worst to see just how far a player might fall (note: you will see names in that chart that you might associate with being centers; we used the data at hockey-reference.com for this review, which had these names included).

As you can see, Alex Ovechkin's high-low gap on plus-minus ranks highly, but there are those with substantially higher differences. However, there are a few things to keep in mind here. First, look at those seven wingers ahead of Ovechkin. All seven did the bulk of their work in what might be thought of as the go-go era of the NHL, when offenses ruled. Those high highs and those low lows by those individuals were compiled in that era.

Third, there are a lot of "5ths" in there. Eight players reached their highest plus in their fifth NHL season. Another ten did it even earlier in their respective careers. Of those players identified here who reached their highest high late in their careers, and there are six who did it after their 10th season, that is perhaps not a function of late blooming as it is the fact that they played much of their respective careers before the NHL established plus-minus as an official statistic.

Fourth, only three players are active on this list. That might speak to the infrequency with which high or low plus-minus values are obtained in this era. As we noted, Ovechkin and Thomas Vanek are the only two players to have reached plus-45 since the 2004-2005 lockout, and Patrik Elias is the only other active forward to have done it in the 2000's (plus-45 in the 2000-2001 season).

While Ovechkin's high and low in this measure is noteworthy in the historical context, it is not historic. However, there is this disturbing nugget. If Ovechkin, who is currently at minus-36, should go one point deeper into the hole, the only thing keeping him from recording the highest plus (plus-45) and the lowest minus (minus-37 or worse) among all forwards since the 2004-2005 lockout would be Thomas Vanek's plus-47 in 2006-2007.