The 2013-14 Washington Capitals Bracket of Fail

Share All sharing options for: The 2013-14 Washington Capitals Bracket of Fail

When a team that has made the playoffs for six-straight years and whose owner all but guaranteed a decade or more of contending for a championship sits on the outside of the playoff picture with a half-dozen games left in the season and long odds of changing that situation, there’s usually plenty of blame to go around for what went wrong, and that’s certainly the case with the Washington Capitals at present.

Fire the coach! Fire the GM! Trade the players! Force the owner to sell the team!

But who - or what - is most to blame for what’s gone wrong in D.C.? That’s what we’re here to determine, and how better to determine it than in the same format that helped us settle which condiment is the best (Sriracha was robbed, but that was a brutal region)?

Here, then, is the 2013-14 Washington Capitals Bracket of Fail, a single-elimination 64-item tournament in four brackets that will once and for all crown the champion of choke, the king of crap-out, the dictator of disappointment.

Let’s dive right in with Region I... 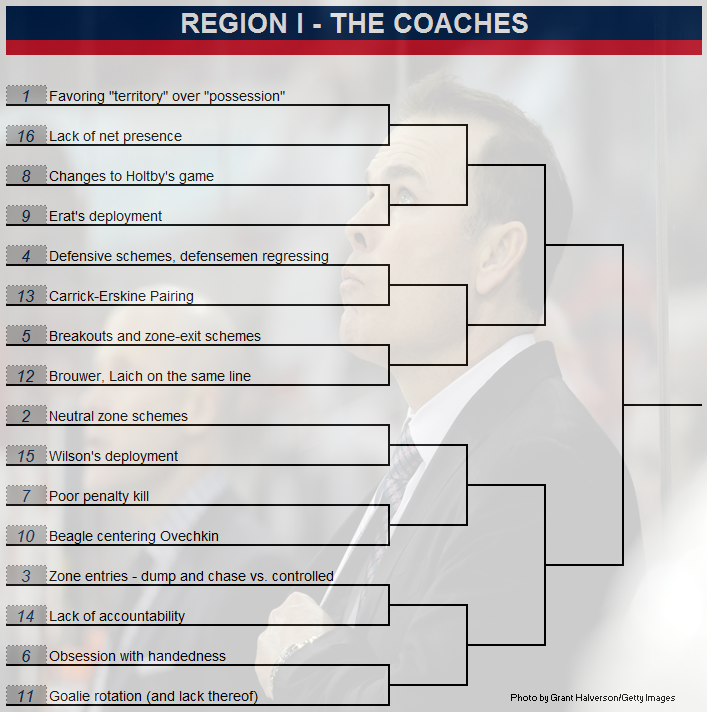 RMNB covered a lot of this ground yesterday, and this is definitely a front-runner for the "Region of Death," with some really strong contenders, including the number one seed - the strategic philosophy underlying much of the Adam Oates regime, that territory trumps possession (meanwhile, the Caps' terrible possession numbers track fairly closely to their position in the standings). As he said upon being hired, "I really feel the game today is territory. You have to establish territory and protect it." The result is a lot more chipping pucks out of the zone and dumping it in... and handing it right over to the opponent. If this was football, these would be third down punts.

By contrast, Kings coach Darryl Sutter gets it: "The big thing in today’s game is you have to be able forecheck and backcheck, and you have to have the puck. You can’t give the puck up. We don’t play in our zone, so there’s not much defending."

Interestingly, the Kings actually dump the puck quite a bit more than most would think... but they go and get it right back.

Anyway, the other contenders in this bracket include more specific system-related aspects of the team's gameplan, how the defense is coached and defensemen developed, Oates's insistence on left-handed players playing on the left side of the ice and righties on the right, a bad penalty kill (that would look much worse if not for the goaltending), trying to fix what wasn't broken in Braden Holtby, the Martin Erat Saga, and odd pairings like Jay Beagle centering Alex Ovechkin for a half-dozen games down the stretch (I remember it like it was yesterday...), Brooks Laich and Troy Brouwer and Connor Carrick and John Erskine.

This grouping will send home some entries that could win other regions.

Speaking of other regions, onward... 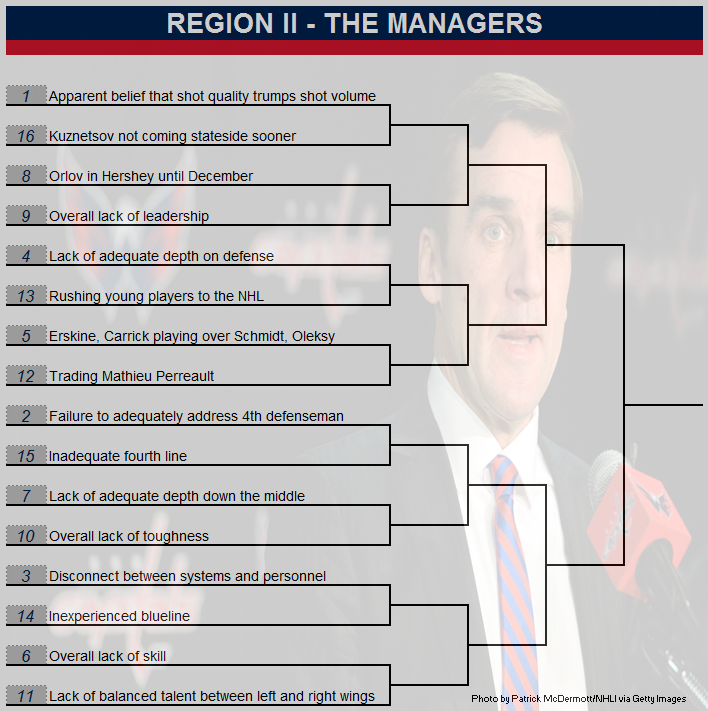 Who hired the guys calling the shots in Region I and executing in the orders in Region III? The Manager(s) in Region II. Top seed in this region was a jaw-droppingly revealing quote from the trade deadline:

"We play a system where teams get probably more shots the way we play but most of them are from the outside, we’ll allow those."

This could easily have been a high seed in Region I, but it's George McPhee's quote, so we'll let him own it here. We took issue with this quote at the time, but it basically boils down to "No, you don't."

Also prominently featured in this region are perennial contenders "no legitimate fourth top-four defenseman," depth at center and inexperience on the blueline, as well as relative newcomers "there are better guys in Hershey," and other factors that are the result of chasing different ideals as they have since the Montreal series in 2010 - "a team devoid of an identity and seemingly lacking in vision, with personnel that doesn't appear to be particularly well-matched to the systems that followed and vice versa." 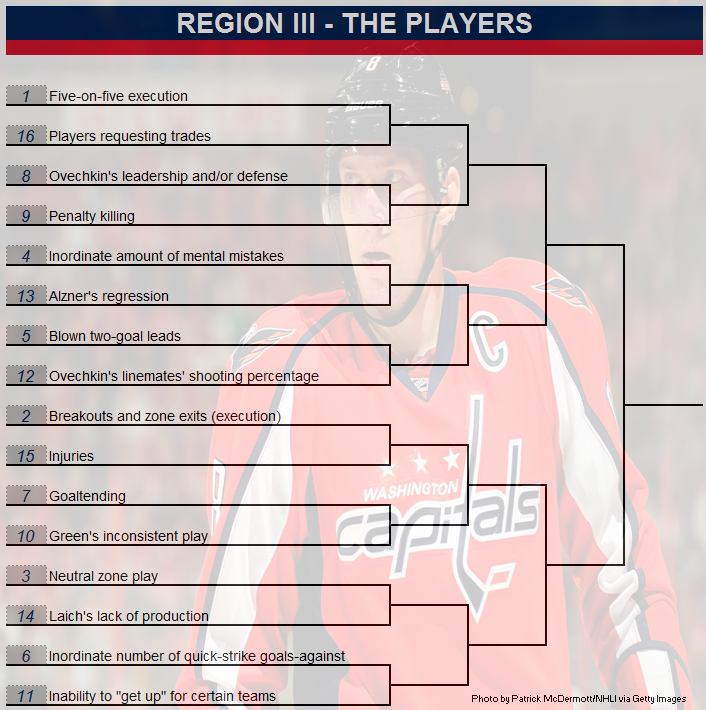 Maybe Adam Oates's system is actually not so bad, and it's just the players charged with executing it who make it look so terrible. It's possible - after all, the third line seems to get it, and the power play has been pretty great.

So where have the players failed? Obviously they've been pretty bad five-on-five, especially lately (though systems play a part here as well). They're bad in the neutral zone, and the mental miscues seem to undo anything positive they do. Then there are the blown two-goal leads (13 at last count) and quick-strike goals-against (28 within two minutes after the Caps have scored a goal of their own). The goaltending, at times, has been shaky. And then there's Alex Ovechkin and his minus-36 rating, which isn't nothing, no matter how bad the stat is or how unlucky he's been at five-on-five. (Jaroslav Halak going 0-3-1/2.94/.905 since changing his mask while on a 3-0-1/1.96/.944 hot streak lost in the play-in round.)

Finally, we have the catch-all region, Region IV... 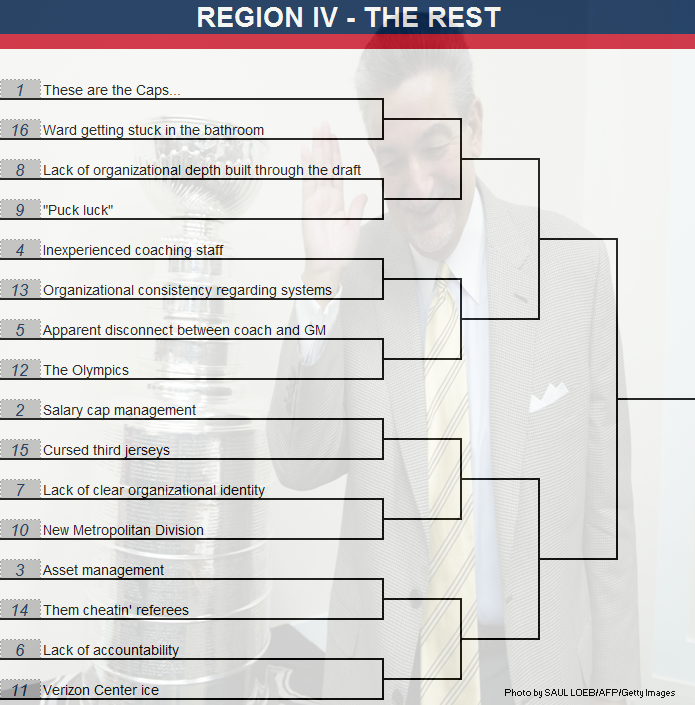 Is it possible that the single biggest reason the 2013-14 Caps are likely going to be a failure is that Joel Ward got stuck in a bathroom stall in Dallas? Yes. Yes it is possible. But no 16-seed has ever beaten a number one and that's probably not going to happen here. Hamstrung, to an extent, by questionable salary cap and asset management, the Caps were unable to adequately address glaring holes on the roster (this is obviously a management issue as well, but that region is more focused on this specific roster, whereas this region contains some bigger-picture issues). An inexperienced coaching staff (which is not the coaches' fault, so not in that region) hasn't helped, neither has the apparent disconnect between the GM and his bench boss (which may have happened again with the Dustin Penner acquisition).

But ultimately... these are the Caps. That's the number one seed in this region and in the tourney. They've been doing "fail" since before most of you were born, and probably will be for a while yet. Maybe not "because they're the Caps," but because we just rattled off 64 mostly serious reasons this season has gone sideways and could probably come up with a 32-item NIT tournament if we were pressed on it. That's a lot that needs to change, and most of it won't be easy - the time for tweaking has passed.

Oh, and no, you don't actually get to vote on these - alternative tournament brackets are so cliché...