From Alzner to Wilson, we're taking a look at and grading the 2013-14 season for every player who laced 'em up for the Caps for a significant number of games during the campaign, with an eye towards 2014-15. Next up, Nicklas Backstrom. 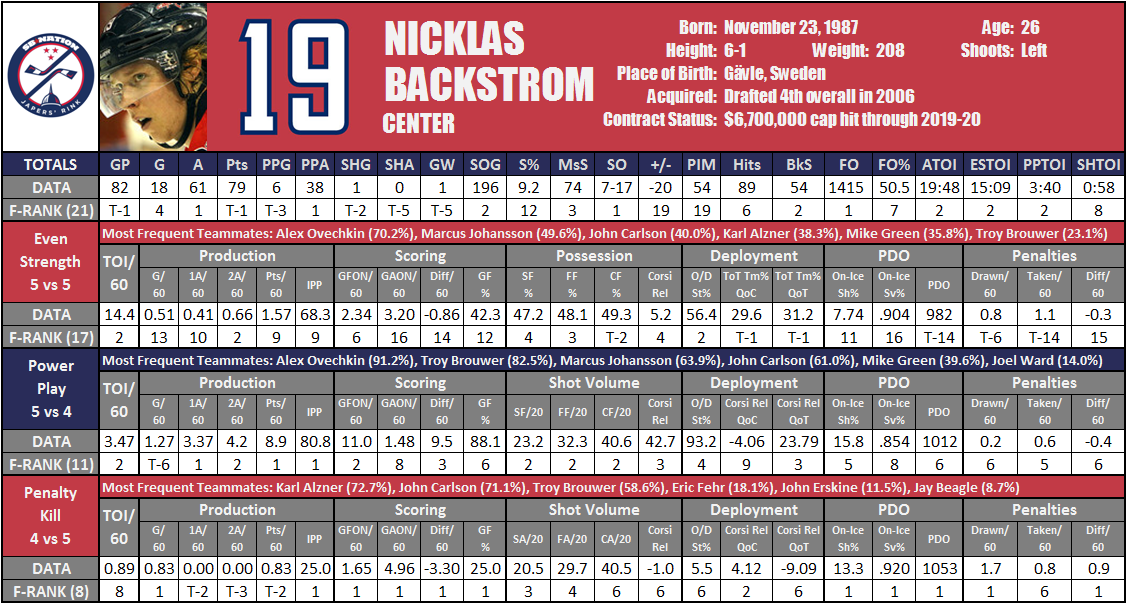 Backstrom and his most frequent linemates (via Stats.HockeyAnalysis.com) and lines (via our own Muneeb): 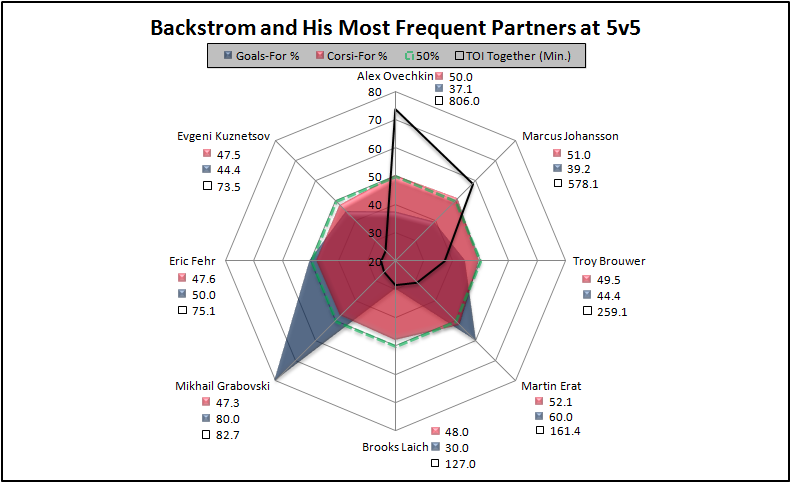 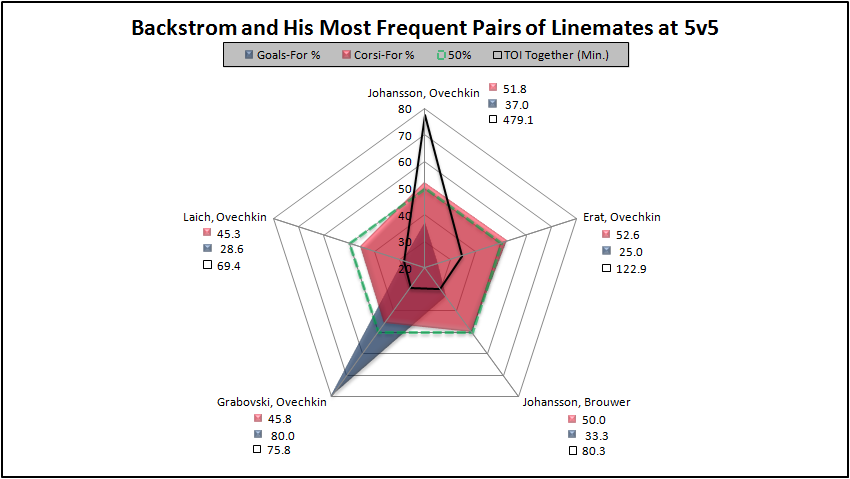 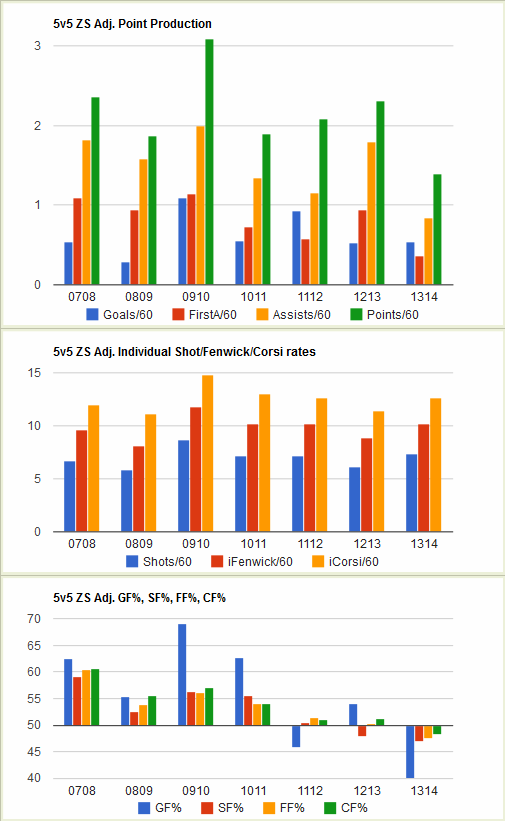 Key Stat: Backstrom picked up 61 assists this season, 25 more than the next guy on his team and the third-highest assist total in the League behind only Sidney Crosby (68) and Joe Thornton (65). That marks the third time in his career that he's cracked the 60-assist mark; only Thornton and Henrik Sedin have accumulated more 60+ assist seasons since Backstrom's rookie season back in 2007-08.

Interesting Stat: Backstrom assisted on just under 57% of Alex Ovechkin's goals this season, picking up helpers on 29 of the 51 goals scored by the Caps' captain. That's the highest percentage of Ovechkin's goals on which he's had a hand in his seven seasons (and just slightly higher than the 56.25% of last season).

The Good: It's never a surprise when Backstrom puts up a lot of points, but after a couple of down years it was nice to see the Swede back on top this season with his 61-assist, 79-point campaign - his highest totals in both since the 2009-10 season (even though his points-per-game rate was a bit lower than the last two seasons). Those 79 points tied him for seventh in the League, and marked the first time in his career that he's finished tied in points with Alex Ovechkin.

It's in part because of that high level of production that the Caps had one of the top power plays in the League this season, with 38 of Backstrom's 61 assists picked up with the extra man, a total that led the League (and set a career high). It wasn't just on the power play, however, as Backstrom also saw a slight uptick in his even-strength goals-per-60 and shots-per-60 over last season. He had success shorthanded, as well, with the best GAON/60 rate among Caps' forwards (and his second-career shorthanded goal, to boot).

The Bad: Although he did show improvement in some areas at even strength, Backstrom's struggles five-a-side often mirrored those of the team, with his lowest even-strength points-per-60 and assists-per-60 of his career to go along with his third-lowest goals-per-60. Some of that can be attributed to a low shooting percentage, the second-lowest of his career... and that in turn may have been a factor in not only Ovechkin's horrible plus-minus but also his own, a much-less-discussed but almost as bad minus-20 on the season.

Backstrom had a surprisingly undisciplined season (relatively speaking), setting a new career high in penalty minutes with 54. He also saw a slight decline in his faceoff percentage, down to jut 50.5% (down from 51.4% last year, 51.2% the year before and 52.5% back in 2010-11) - just one of many areas in which we might have expected improvement with Adam Oates coming in, and part of the larger fact that Oates really was seemingly never able to have much of an impact on Backstrom's game.

And of course, it didn't get much worse than the debacle at the Olympics that saw him banned from the gold-medal game for supposed overuse of allergy medication. Whether you put the blame on the doctors, the Swedish team as a whole, the IOC or Backstrom himself, there was nothing about that situation that wasn't awful from start to finish - no doubt the fact that he was eventually awarded his silver medal was small consolation at that point.

That Nicklas Backstrom is one of the game's elite playmakers is not a secret around these parts, and he made that point pretty clear this season when he checked in with one of the top assist totals in the NHL. Not all of those 61 assists were made equal, however, a fact he made perfectly clear on this ridiculous curl-and-drag that fooled Tobias Enstrom, fooled Ondrej Pavelec and set up Troy Brouwer for the goal.

The Discussion: After three straight years of increased even-strength point production, does Backstrom's sudden dip in five-on-five scoring concern you or do you think it was just a temporary lapse? Is Backstrom capable of being a 20-goal scorer again? What would it take for you to give him a "10" next year?