Looking Back at the Washington Capitals' Death March of March

The Peerless is at the end of the bar looking back on 15 games that presented an opportunity, could have been a disaster, and in the end were neither.

Share All sharing options for: Looking Back at the Washington Capitals' Death March of March

We might have turned the calendar over, but let's not leave March quite yet. When Caps fans looked at the March schedule and saw the Boston Bruins three times, the Pittsburgh Penguins twice, the Philadelphia Flyers twice, the Los Angeles Kings twice, not to mention the San Jose Sharks and the Anaheim Ducks on a California trip that would also include a visit to Los Angeles for one of those two games against the Kings, fans might have been forgiven for thinking, "oh, this is not going to end well." The Caps actually came out on the plus side of .500 as far as standings points went for the month, earning 16 of a possible 30 standings point (6-5-4), with only one regulation loss in their last eight games.

Things were not all beer nuts and bratwurst, though. In those 15 games the Caps struggled in the top end numbers and the underlying metrics at even strength. In all even strength situations:

As it turned out, the Caps had those 22 even strength goals in 15 games. Here are the scoring plays: 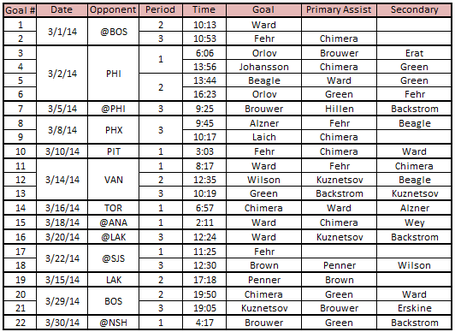 Notice anything there?  First, the third line of Jason Chimera, Eric Fehr, and Joel Ward stepped up in a big way.  Ward was 4-4-8 in 15 games, Chimera was 2-6-8, and Fehr was 3-3-6.  Nine of the 22 even strength goals came out of players on the third line.  At least two of them figured in scoring plays six times.  Of Chimera's six assists, five were of the primary sort.

Dig further.  The defense accounted for four of the 22 goals and added eight assists.  Mike Green had five of those assists.

The new guys - Dustin Penner and and Evgeny Kuznetsov combined for a two goals and four assists. 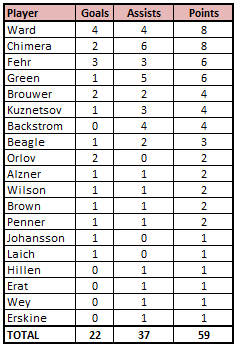 Then there was the top line.  More to the point, the Jay Beagle, Alex Ovechkin, Marcus Johansson line.  Here the calendar is important.  Johansson had a goal, but that was with Chimera and Green providing the assists.  Beagle had a goal and two assists at even strength.  But Johansson's goal and Beagle's three points all came before March 16th.  Why is that important?  It was in that game against Toronto - 15:53 into the second period to be exact - that Beagle, Johansson, and Alex Ovechkin were united on a line.

The line was together, more or less, for the rest of that game against Toronto and for the next six games to close out March, save for some time in the last game of the month against Nashville when Mikhail Grabovski returned to the lineup and replaced Johansson.  None of those three players recorded an even strength point in that configuration.  For Ovechkin the string extended one of even strength futility that lasted the entire month - no even strength points recorded in any of the 15 games.  He has two even strength points since the Olympic break, a goal and an assist in a 5-4 win over Florida on February 27th.

On the other side of the ledger, the Caps were out-shot by more than five shots per game at even strength in March, 26.3 to 20.9. Here is what that means. If an opponent holds the Caps to two even strength goals per game their save percentage would be .904. For the Caps to hold their opponent to those same two goals per game, their save percentage would have to be .924.

But now the calendar has turned over.  The Capitals' are down to six games after last night's implosion against Dallas.  Looking at those six opponents and their records home and away, they have a combined win-loss record of 112-78-37 in the home/away venues in which they will play the Caps, a .575 standings points percentage:

Every one of those six teams against which the Caps close out the regular season has better possession statistics than the Caps (before Tuesday's games): 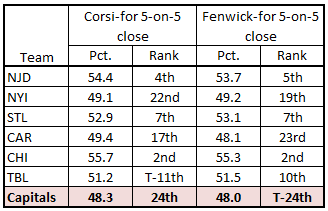 It is a steep climb the Caps face in the last two weeks, made a great deal harder by their loss to Dallas on Tuesday.  At this point, though, they have no one to blame but themselves for the difficulty of the task.