Sittin' at the End of the (Capitals) Bar: The Washington Capitals Against the Playoff Field

The Peerless takes a look at the Caps' season against the 16 clubs in the Stanley Cup playoff field and how the Caps stacked up against the best the league had to offer.

Share All sharing options for: Sittin' at the End of the (Capitals) Bar: The Washington Capitals Against the Playoff Field

Now that the playoffs are here, and the Washington Capitals aren't in them, it got us to thinking about the Caps and how they did against playoff teams this season. Did Washington measure up against that level of competition, or was it merely wishful thinking that if they got in, some damage might have been done by the Caps?

Let's start at the top, with pure wins and losses. 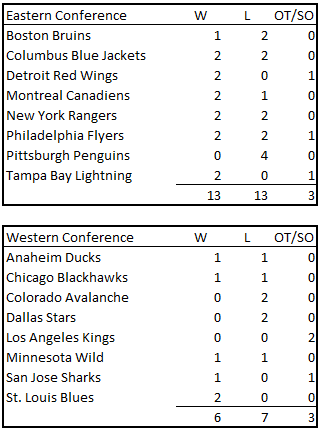 The Caps had five winning records among the 16 opponents. As far as the East goes, only the Penguins kept the Caps winless... a fact which might be reason enough for some to blow up the club.

What about goal-scoring - were the Caps an offensive juggernaut against these teams? A defensive wall? In fact, they were neither. Here are the goals-for/goals-against, by team, for the season: 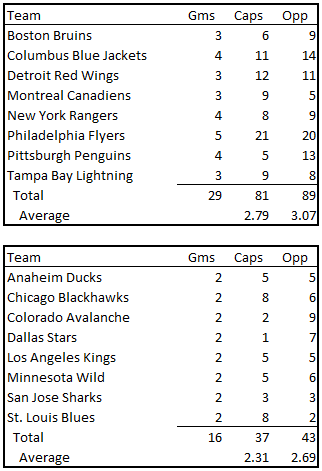 At first glance, what stands out is the more close-to-the-vest style the Caps played against Western Conference teams, perhaps approaching most of these contests a bit more cautiously due to a lack of familiarity.

Also notable are the games against Dallas and Colorado, games played against goaltenders who were very familiar with the Caps (for very different reasons) - Stars' goalie Kari Lehtonen got to see quite a bit of the Caps as an opponent back when he played for division-rival Atlanta, while Semyon Varlamov, a Caps' draft pick, played in 98 regular season and playoff games over three seasons for the team. Combined, that pair allowed the Caps only three goals on 136 shots over four games. All of those games were lost by the Caps, and the opposing goalie was the number one star in three of them (Varlamov twice, Lehtonen once).

And what about special teams? Did the Caps' power play duplicate their overall success for the season? Did the penalty kill struggle? Actually, the Caps did rather well here, particularly against the West: 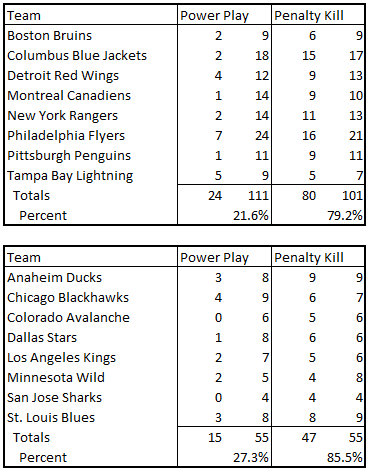 So what about possession, something with which the Caps struggled all year... was it any better or worse against playoff-bound teams?

Funny you should ask... and not in a "funny ha-ha" way. Actually, the possession numbers for five-on-five close score situations are positively funny in a "WTF" ("What the Fenwick?") sense. Here is how the Caps broke down by conference and by wins and losses (including both regulation and extra time losses):

By conference, the Caps are remarkably consistent; that's not a good thing in this case. Corsi-for, Fenwick-for, shots-for...all south of 50 percent, regardless of whether the opponent was from the East or West. In fact, in 29 games against Eastern Conference teams the Caps were over 50% in Corsi-for percentage only six times. In 16 games against the West, they topped 50% only twice.

Oddly, in those eight games the only two losses came to... the Penguins. Don't you just hate that team?

The difference, dear reader, was not in the statistical effectiveness under those measures, but outcome efficiency. In other words, when in doubt, look at the shooting percentages. The Caps simply shot better in wins (9.4%) than they did in losses (4.6%), and they were simply better at stopping pucks in wins (.949 save percentage) than in losses (.903).

At the end of the day the Caps just were not all that good against top-flight competition.

Why? Maybe there is something to this whole "shot quality" thing, that in wins the Caps had better shot quality and/or held opponents to poor quality chances. Or maybe a puck or two hit a pipe and went in instead of pinging out. Or it hit a stick or a leg, or a tuchas and caromed in. Hockey is funny that way... and no, not in a "ha-ha" way.

Whatever the reason(s), however, at the end of the day the Caps just were not all that good against top-flight competition, defined as "playoff-bound." A record of 19-20-6 in 45 games against those 16 clubs (13-13-3 against the East) is a fair enough sample of season games to indicate that even if the Caps squeaked into the post-season, their stay there was not going to last.

You might argue, "but Peerless, a .500 record... that's a flip of a coin, maybe it comes up ‘heads' in four series." You want to hang on to that dream? Eight of the top ten teams in possession this season (Fenwick-for, five-on-five close) are in the playoffs; 14 of the top 20 teams are in. Only two of the bottom ten teams - Minnesota (21st) and Colorado (27th) - are in the postseason. The Caps finished 25th. That is a lot of pressure being put on the defensive end of the rink and goaltenders over four seven-game series to think that the Caps would be able to overcome such a propensity for opponents' territorial dominance.

So go, enjoy the playoffs. For the next two months we will enjoy the greatest, most spellbinding tournament in team sports (well, maybe those World Cup soccer fans will disagree). Let's hope the Caps use the time wisely to figure out how to turn these numbers around overall and against the best the NHL has to offer so that they are part of the fun next year.