Alex Ovechkin skates hard down the lane towards Henrik Lundqvist. He receives a beauty of a pass from Nicklas Backstrom, aims the puck top shelf and scores to lift the Capitals up by a goal late in the second period. The phone booth is rockin' and the energy is at an all-time high heading into the third.

Wouldn't it be great to re-watch that top-ten career goal again two minutes after it happens? Wouldn't it also be great to pull up some stats on the night to see how the guys are faring against the opposition? You might soon be able to - the buzz around the DC sports media scene lately has been about a new app that would provide the above and more, as Ted Leonsis (being the tech guru that he is) continues to look for technological advances that will bring more to the fan experience. 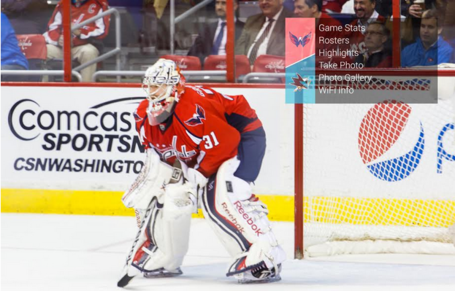 APX Labs, a Northern Virginia-based firm that traditionally has focused on military solutions, is now setting its sights on an immersive app for Google Glass that would afford a fan an advantage never before seen in sports. A few years ago APX developed what they nicknamed "Terminator Vision", which would identify pedestrians coming up to a checkpoint in a military installation. Their glasses would use the video feed, send the image of the face back to a central database, confirm identity and display this information within a matter of seconds. That was the foundation for what would become known as SkyBox, which, according to Jay Kim of APX Labs, is the next frontier for sports entertainment:

"Sports is a great market, because it brings together all walks of life and sees the value of this - not only with watching sports, but maybe other applications such as in the medical field with patient information displayed."

The ability to provide fans with real-time stats, media, and social experiences is the spirit behind SkyBox - taking in-house data and delivering it directly to the fan, real-time, in a consumable manner via Google Glass.

APX noticed that fans were already seeking different stats, pictures, and social experiences while on their phone during intermission or even during the game. However, often times they're not able to find up-to-date stats or video of the goal that was just scored. SkyBox takes the guess work out of the hands of the fan, tapping directly into the in-house database that keeps track of highlights and stats to provide this information right away. There's even a social media aspect that could tie users in a certain section together based on who is running the app.

Recently I had the opportunity to test SkyBox and Google Glass during a Capitals game, and overall it's a very exciting experience - one that could easily gain traction once fully deployed to fans. DC as a whole is a very tech-savvy city, as well as a sports-driven one; it seems only natural to combine the two for the ultimate fan experience. 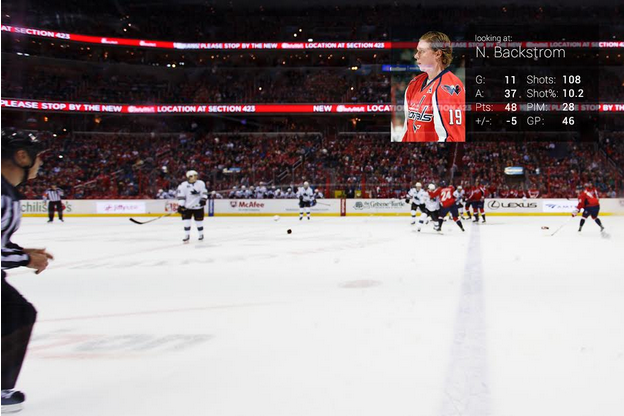 Using the Google Glass (which looks like a pair of glasses with the lens removed) is unobtrusive to your normal sight line and can easily be referenced by simply looking up into the lens that has projected images. I was hesitant that the lens might get in the way while watching the game, but I found I had no trouble concentrating on what was going on, and could easily navigate to the app's content at will. Highlights from plays, penalties, etc. came to the app two minutes after the play happened - very impressive, since traditionally you'd have to wait much longer for that media to be made available.

So what's next? APX and Monumental are currently test-driving the beta app during Capitals games, but plans are in the works to optimize this technological offering on a wider scale, with the goal of eventually creating a VIP experience that could include renting a Google Glass for a game. And soon you may be able to find this technology at any number of sporting events - after word spread that the Capitals were employing the app, APX has been contacted by other sports teams, and expanding the product to its full grown potential is the road ahead for SkyBox.