George McPhee has made a couple of comments recently that give fans some insight into how the organization sees the team. Comments that don't exactly align with what the team has done on the ice, or how the fans see the team.

Share All sharing options for: Rocking the Red Kool-Aid

Following Wednesday's NHL Trade Deadline, Caps fans took stock of the moves George McPhee made. None of the trades made significant changes to the current roster. They didn't indicate the team was giving up on the season, nor did they sacrifice significant future assets to try to "win now." We generally liked the moves, thinking that ultimately they served to free up future cap space so that the team's many needs could be addressed this summer without making them less competitive down the home stretch of the 2013-14 season.

We also thought that none of these moves made the team good enough to make the playoffs. There's simply too many deficiencies in the roster, and the team failed to bank enough points during the easy portion of the schedule. George McPhee, apparently, sees things quite a bit differently than we do:

"We feel, today, that if we can ever get everybody in at once, it’s a pretty good hockey team," he said. "That’s what’s been unfortunate; we just can’t get a healthy team. . . . But if we can get it together, we like this group. It’s a pretty good group. And if it makes the playoffs, there are going to be teams that don’t want to play us."

McPhee doesn't think the playoffs are a foregone conclusion, but he reiterates a statement that we've heard a few times before: We like our team. Granted, the team on paper looks competitive, especially the forwards, and especially if Evgeny Kuznetsov can join as a top-six caliber player right away. But blaming the team's failure to hold down a playoff spot on injuries is not only an excuse, it's an inaccurate one.

Rink Roundtable: After the Deadline Connor Carrick and the Cost of Development

For starters, the Caps have not been hit particularly hard by injuries when you compare them to their peers. Losing Brooks Laich and Mikhail Grabovski is tough to deal with throughout a season, no doubt (and looking at a man-games lost analysis by cap hit understates the importance of losing Grabovski in particular), but those are the only two guys who missed substantial time due to injury. Two guys. Meanwhile Eric Fehr missed time... because the coach healthy scratched him. Martin Erat missed time, and then begged out of town... because the coach healthy scratched him. Mathieu Perreault could have been helpful center depth in the event of injuries (which aren't really unpredictable in today's NHL), but the Caps shipped him out before the season started. It seems just as likely that any problems the team had on offense were self-inflicted as they are caused by injury.

Beyond that, this team's issue isn't on offense, it's on defense (and it has been getting worse). And on defense, the injuries are even less of a problem, the deployment choices even more glaring. The only defenders to miss substantial time with injuries are Jack Hillen and John Erskine. If you think that having Hillen and/or Erskine in the lineup would be a (positive) difference-maker - at least to the extent that it would make up for the team's defensive woes - you aren't being honest with yourself.

Coming in to the season, the Caps had a clear top-three defenders (Karl Alzner, John Carlson, Mike Green), and those guys have played the vast majority of the games this season. We knew that the fourth defender in the top two pairs would be an issue, but Dmitry Orlov has stepped into that spot (after finally being given an opportunity after Thanksgiving had passed) as well as anyone could have expected. So it's not a question of having healthy bodies so much as deploying said healthy bodies correctly, and just as there were questionable deployment decisions among the forwards, the team has left us scratching our heads on the defense. 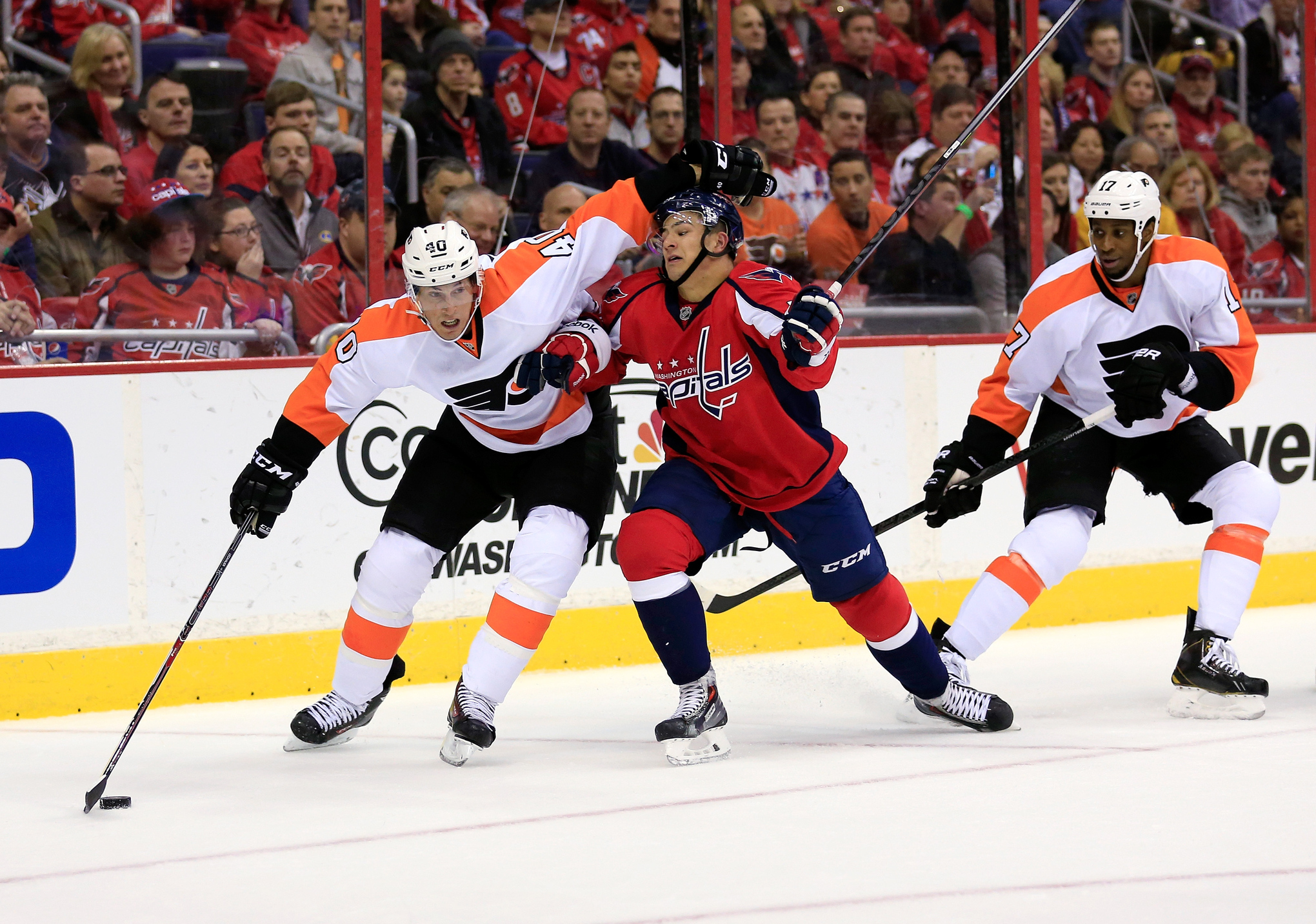 Connor Carrick has been on the NHL club for virtually the entire season, despite being over-matched at the NHL level. Nate Schmidt and Steve Oleksy have been in Hershey for months now, despite out-performing Carrick and Erskine against NHL competition.

As baffling as the personnel choices are, the real problem comes with the defensive system. It's debatable (doubtful?) that this defense would look much better even with more ideal deployment because as a team, the Caps don't defend well regardless of who is on the ice. McPhee let's us know what the team's goal is in their own end:

"We play a system where teams get probably more shots the way we play but most of them are from the outside, we’ll allow those. In some ways that might be better for this particular goaltender."

This is the old shot quality claim. To be clear, I'm more sympathetic to shot quality claims than most of the supporters of advanced statistics. It's a tough thing to measure, and there seems to be some evidence of it in extreme cases. The Boston Bruins of the the world. The Minnesota Wild under Jacques Lemaire. Teams known for locking it down defensively. That is not these Caps. That may be the goal, but in looking at the numbers, it seems far more likely that the Caps are just like the majority of NHL teams: unable to control the quality of shots against in a meaningful manner.

Looking at the actual play, it's even more clear that the Caps are not keeping the puck to the outside. They didn't do it against Philadelphia the day after McPhee's quote. They couldn't do it against league doormats Buffalo and Florida. Early in the season when they were picking up more points in the standings (many via the shootout), they were leaving players open in front of the net. They let dangerous shooters walk down the slot. From virtually Day One we saw problems defending their net-front. Any of these might be anecdotal on their own, but over the course of a season they form a pattern - a pattern of poor defense.

It's troubling enough to see this team (a team that has sent a representative to the Sloan Sports Analytics Conference several years in a row now, by the way) explicitly deny the undeniable statistical correlation between out-shooting opponents and winning. It's even more troubling to see the team do this while also clearly failing at their stated defensive strategy, a strategy that might mitigate the impact of being out-shot.

We know that you must take McPhee's public statements with a grain of salt. In the case of these statements, that salt should probably be accompanied by a tequila chaser.