Rink Roundtable: After the Deadline

With the trades made and less than 20 games remaining, it's time to weigh in on the moves that were made (and not made) and the prognosis for the 2013-14 Caps.

Share All sharing options for: Rink Roundtable: After the Deadline

Q1: Now that the dust has settled, what are your thoughts on the moves made by George McPhee at the deadline?

Peerless: Thinking about the position the Caps were in at this deadline, the words I think about are "pieces" and "holes." At the trading deadline teams with serious Cup ambitions are adding pieces, a depth defenseman, another forward. The Caps have holes -- uneven production from the bottom half of the forward lines (and they don't compensate by being especially dynamic defenders), an open wound that is the bottom three on defense, regressing goaltending. It is too much to address in deadline deals. You could add the parts, but getting them to mesh in 20 games to the post-season? I would not rely on that. You deal with holes through the personnel moves you make in the off-season or much sooner in the season than the trading deadline.

That said, I'd have been fine with McPhee doing the Dustin Penner and Rostislav Klesla deals. Not excited, just "fine." He did not have the assets to make bigger deals this season unless he wanted to part with prospects and/or high draft picks. That would be a big change in philosophy. The Jaroslav Halak deal is not one that I am very high on. Halak is a good goalie, perhaps an upgrade over Braden Holtby, especially with the way Holtby has played since about mid-December (15 appearances, eight times allowing four or more goals).

But is Halak enough of an upgrade to help the Caps jump two teams to make the playoffs? He didn't exactly get overworked in St. Louis, facing fewer than 27 shots per 60 minutes this season. That's what Ken Hitchcock teams do. He'll see a lot more rubber in Washington. J.P. noted recently that Halak has a fine career record when facing shot volumes of the sort he might see here... guess we'll find out what wins, the resistible force (the Caps' defense) or the movable object (Halak scrambling around to make saves).

JP: I thought the Caps should be "soft" buyers at the deadline, and they essentially were... but they didn't address the area they so desperately needed to address, namely the defense. McPhee can only make the moves that are out there, and we all saw how few impact defensemen moved, even if some of them would have been upgrades here. But whether it was at the deadline or earlier in the year or this coming summer, the team is going to have to get creative to fix the problem that is the blueline. Simply throwing money at it or hoping prospects develop at accelerated rates isn't going to get it done any more. (Then again, it's reasonable to wonder how much impact one defenseman might have in this system.)

Whether it was at the deadline or earlier in the year or this coming summer, the team is going to have to get creative to fix the problem that is the blueline.

As for what he did do, he made the team better and cleared salary for next season (and/or to bring in Evgeny Kuznetsov this year), while giving the team a chance to catch lightning in a bottle in goal like they did in 2008, so it's hard to argue with those moves. There just should've been... more. In the second game after the deadline, the team had Jack Hillen, Connor Carrick and Cameron Schilling comprising half of the blueline. That's simply not good enough.

Becca: I thought this was a really interesting trade deadline for McPhee. On the surface it may look like he made moves usually reserved for a contending team, bringing in rental players on expiring contracts to complement what's already in place - but that's not really what these seem to be. As a whole, the trades McPhee made seemed to have been done with three goals in mind: 1) honor trade requests for guys looking to move, 2) bring in pieces to replace them on a temporary basis, and 3) shed salary so those positions can be replaced/upgraded over the summer.

If that's the case (and obviously I don't know that it is), it was a pretty successful 24 hours. Martin Erat and Michal Neuvirth wanted out, they got out - and in their place came two players who are, if not upgrades over both, at least lateral moves. The Caps didn't have to give up much to make the moves, got some good value back and swapped out a prospect who probably wasn't going to see NHL time for one who maybe has a bit more upside in Chris Brown.

A lot of people have mentioned that the Caps' biggest need was on defense. And while that's the case, it certainly didn't seem like the players were out there to upgrade the defense - a number of teams were rumored to be looking for that and yet very few of them came away with anything at all, while those who did make a move for blueliners didn't get anyone too significant. And as JP points out, it's hard to imagine that one player would have made much of a difference at this point; considering where the team is standings-wise, schedule-wise and systems-wise, it makes little sense to throw away assets on something that would be, at best, a slight upgrade for what could be a futile push for a playoff spot. All in all, I'm fine with him this not being addressed right now.

That said, ask me again if the team stands pat with their current defensive corps this summer...I'll have a different answer.

Rob: The trade with Phoenix was the cherry on the turd sundae that was the Filip Forsberg -for-Erat saga. Once it got to the point of a should-be top-six player demanding a trade, you knew nothing of much value was coming back in return, and that's how it played out. The Caps picked up a mid-round draft pick and a guy with a third-line ceiling. Yawn. Klesla at one point would have been a great upgrade over the D the Caps were dressing, but at this point it looked like Phoenix was dumping salary back on the Caps, which isn't ideal given the Caps were moving by far the best asset in the deal. That Klesla was immediately assigned to the AHL corroborates that, and that he was again immediately flipped further corroborates it. But that single trade, ignoring the context, is not surprising.

Flipping Klesla, and clearing his cap space (which right now is crucial if they want to fit Kuznetsov on the roster) was a positive move. That the Caps were also able to upgrade the goaltending, free up salary next season, and pick up third-round pick was a big victory. I don't think the goaltending upgrade is enough to put the team in the playoffs, but I don't think any single move made at the deadline by any team would have been enough. There were plenty of defensemen that moved that would have been upgrades on the Caps defensive corps, but given the systemic issues, the schedule, and the way the team has played all year, they wouldn't have changed the picture enough. These guys weren't Chris Pronger. They weren't even Christian Ehrhoff (and as nice as it is to dream of adding him, the cost would have likely been outrageus, seeing as Garth Snow wasn't the guy on the other end of that phone). 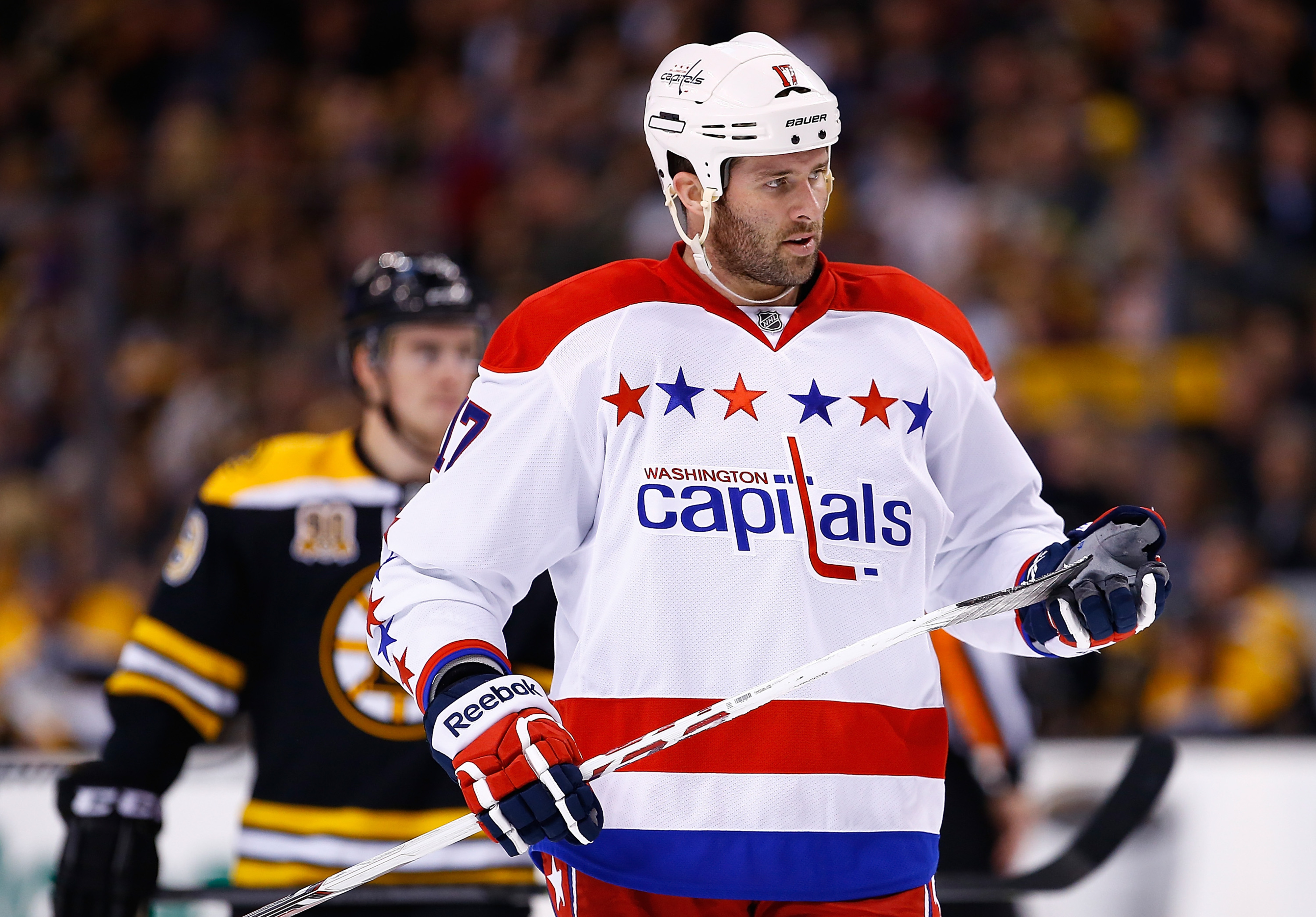 Picking up Penner for a fourth is nice. It replaces a should-be-top-six player with another should-be-top-six player. Erat was brought in to replace an injured Brooks Laich, and one game after Penner joined the team, Brooks Laich went down with another injury. That's symmetry. Or something. Whatever it is, it's a marginal upgrade for very marginal cost. It'll keep the team from icing a completely embarrassing top-six, but it's not going to push them over the hump to make them favorites for a playoff spot (though, in fairness, the roster on paper should have already been a favorite for a playoff spot, so talent isn't really the issue with this team).

Overall, it was a good deadline for George McPhee. He didn't sacrifice any valuable future assets. He opened up cap space to help re-make the team this summer. He moved out the guys that didn't want to be here. If the team goes on a hot streak (like last season) they could make the playoffs, but pushing significant future assets into the pot to try to get this team in the playoffs would have been the wrong move.

Q2: The Caps have just under a quarter of the season left and are one point out of a playoff berth. Do you think the moves made this week were enough to secure a spot in the postseason?

Peerless: Not likely. The arithmetic starts to work against them quickly here. Columbus has the last playoff spot as of Thursday and is on a 91-point pace. That means the Caps need 92 (I don't think they will win any tiebreakers with Columbus). They need 24 points in 18 games, with the bulk of that tough March schedule yet to come. If they win half of the available standings points over the rest of the month they get to 80 points with seven games remaining in April. They would need 12 of 14 available points to get to 92. I don't see how adding Thomas Vanek or Martin St. Louis improves that picture enough to make the playoffs, let alone Penner and Halak. The Caps are going to have to play far past the profile they have displayed so far this season or have a team go bad quickly and consistently to brighten that picture.

JP: I think this is the year that the desperation push to make the playoffs comes up short, and from the looks of how they've played these last two-plus games, they think so too. The math and the schedule are conspiring in a nasty way against a team that has plenty of holes that don't look to be shored up any time soon. Getting Mikhail Grabovski and Brooks Laich healthy and Kuznetsov here would help, but barring Halak turning into Huet 2008, I think the Caps are hitting the links a few weeks earlier than normal this spring.

Becca: Nope. This team is what it is, a fringe team that is losing ground fast and facing a ridiculously tough schedule this month - swapping out Erat for Penner and Neuvirth for Halak probably isn't going to change that. The team needs some bigger changes, and they need to come this summer. Whether that means simply using their newly-acquired cap space to fill some holes, or bringing in a new front office to do that filling, I'm not sure... but either way it looks like the offseason's going to get underway a bit sooner than we've become used to around here.

The Washington Capitals at the Trade Deadline