Sittin' at the End of the (Capitals) Bar

The Peerless takes a look back at deadline deals in this playoff era of Washington Capitals hockey and wonders, "does it matter?"

Share All sharing options for: Sittin' at the End of the (Capitals) Bar

It is a little known fact...

Yesterday, Rink Readers were provided the complete George McPhee trading history. In the current playoff era for the franchise, the Washington Capitals have made trades for nine players over the 2008-2013 period (not including those acquired yesterday) - three centers, three wingers, two defensemen, and a goalie. Those players are:

Sergei Fedorov scored one of the most famous goals in Capitals playoff history, but that would not come in his trade year to the Caps. In the year in which he was acquired in trade from the Columbus Blue Jackets it took Fedorov a bit of a while to get going. He had just one point for the Caps in his first five games after the trade and was just 1-4-5 a dozen games into his new setting. However, he was 1-7-8 in his last six regular season games and scored the game-winning goal in the season finale against Florida to clinch the Southeast Division title and a playoff spot for the Caps. Fedorov had a similarly slow start in the playoffs - one point in Games 1-4 against the Philadelphia Flyers. He was 1-3-4 over Games 5-7, but what might be best remembered is Alex Ovechkin passing up an open look at a shot to try to feed Fedorov charging the net late in the third period of Game 7 and the score tied, 2-2. The Caps lost the game, and the series, in overtime.

Matt Cooke had a reputation for being a player who played on the edge, but it might not have been as widely circulated a reputation among fans given that he played his entire NHL career in Vancouver before he was traded to the Caps in 2008. Cooke had quite an introduction to Washington. In his second game with the Caps he had the game's first goal 32 seconds into the game, then added two assists in a 10-3 rout of the Boston Bruins. Those would be his only points over his first six games with the Caps, and he was just 2-3-5 over his first 14 games with Washington. He did have a goal and an assist in his last three games of the regular season, but those would be his last points of the year. He had no points in seven games against the Flyers in the playoffs, recording only eight shots on goal in 97 minutes of ice time. That would be his last action for the Caps. He would find his way to Pittsburgh the following season to skate for the Penguins.

Cristobal Huet was a curious acquisition for most fans, given that Olaf Kolzig was still assumed to be the number one netminder in 2007-2008. Kolzig was not happy, but Huet stepped in and might have ended up being the most consequential deadline acquisition in Caps history, at least since the Stanley Cup final run in 1998. Huet allowed more than two goals only twice in 13 regular season appearances, and he closed the season with nine straight wins, a goals-against average of 1.52, and a save percentage of .941 in those nine wins. Things did not go as well in the post season, though. He allowed four or more goals in three of the first four games against the Flyers, and although he would allow only two in each of the last three games of the series in regulation time, it was the goal he allowed in overtime, the third of the game - when he turned his head the wrong way looking to see where a rebound went and Joffrey Lupul buried the loose puck - that sent the Caps home for the summer. It was Huet's last game as a Cap. He signed a free agent deal with Chicago in the summer.

Caps fans will remember that Mike Ribeiro's acquisition in 2012 and Mikhail Grabovski's signing last summer were efforts to address a long-standing weakness at the second-line center position. The problem went at least as far back as 2010, despite the Caps' juggernaut of an offense. Brendan Morrison, who occupied that slot and who was productive early on that season, had just one goal in 26 games and two in 35 contests before Eric Belanger dressed for the first time with the Caps after he was obtained from Minnesota. Belanger, who might have been a better fit as a third-line center, provided some stability at both ends, but not a lot of production: two goals and four assists in 17 games, and he had just three points in his last 12 games of the regular season. It did not get better in the playoffs, where Belanger had one point, an assist in Game 1 against Montreal. He did, however, leave one of the most enduring images of that post-season when he pulled out his own tooth (one of nine he would lose after being high-sticked by Montreal's Marc-Andre Bergeron) on the Capitals' bench in Game 5. It would be the last lasting image of his tenure with the Caps. He signed with the Edmonton Oilers as a free agent the following summer.

Somewhere out there, there is a school of thought that says you cannot have too many defensemen. Maybe that was why the Caps traded for Joe Corvo (jokes about his impersonating a "defenseman" notwithstanding). His acquisition was one of those rare intra-divisional deals, but in a certain light it might have been seen as an upgrade over incumbent Brian Pothier, who was still coming back from a serious concussion suffered against Boston in 2008. Pothier missed 94 of 185 games in the aftermath of his concussion until his being included in the trade to Carolina (with forward Oskar Osala and a draft pick) with Corvo coming to Washington. Corvo's regular season stint with the Caps started (0-1-1 in his first five games) and ended (0-1-1 in his last ten games) slowly with a spurt in the middle (2-2-4 in three games). In the post season he had a goal in Game 1 against Montreal and an assist in Game 2, but was otherwise pointless. Brought in as an offensive defenseman, he was on ice for only three goals scored by the Caps over the seven games. He returned to the Hurricanes as a free agent the following summer.

Scott Walker was obtained by the Caps in a separate deal with Carolina from the one that netted the Caps Joe Corvo. It was simply a case of getting depth at forward for a low, low....low price (a 7th round draft pick). He shocked Caps Nation, though, by scoring a pair of goals in his first game with the club, a 5-4 win over Tampa Bay. That would be his high point with the club. He had one point over his last eight regular season games and was scoreless in less than seven minutes in his only post-season game. His stop in D.C. would be his last action in the NHL. As it turned out, he might have been best known during his time in Washington for his commuting preferences.

The second line center carousel stopped to let Jason Arnott on in 2011. It was hardly a surprise when the New Jersey Devils traded him to the Caps for David Steckel and a draft pick. You could have found a hermit in a cave in northern Finland who knew that Arnott and the Caps were a good fit at the deadline that year. Arnott made the prognosticators look good early when he had an assist in his first game on a goal that tied the New York Islanders with less than a minute in regulation time in a game that the Caps won in overtime. He scored his own goal in his second game, the game-winner late in the third period in a 3-2 win over St. Louis. However, after going 2-3-5 in his first seven games with the Caps he missed six games to injury. He stepped back into the lineup in time to record a pair of goals over the last four games of the regular season. In the playoffs he was 1-5-6 in nine games, but he was not enough to keep the Caps from being swept by Tampa Bay in the second round. He signed with St. Louis as a free agent in the following off season.

Then there is Dennis Wideman. This one came kind of out of left field, but getting a 20-plus minute a night defenseman (25-plus over the 2007-2008 through 2010-2011 period, actually) from Florida for a prospect and a pick (neither of whom has yet to dress for an NHL team) qualifies as a steal. Wideman took a little while to get going, but after going just 0-2-2 in his first six games with the Caps he went on a run of 1-4-5 over his next five games. It all came apart, though, in his 14th game with Washington when he got tangled up with Carolina's Tuomo Ruutu and suffered a leg injury. What was thought at first to be a bruise ended up being compartment syndrome, a serious condition. It was serious enough to end Wideman's season.

Perhaps it is because of the relatively recent nature of the deal, but the trade that brought Martin Erat from the Nashville Predators to the Washington Capitals at the 2013 trading deadline is one that seems destined for debate among Caps fans for years to come. It was not so much Erat as it was the price to obtain him (and prospect forward Michael Latta). Filip Forsberg, an 11th overall draft pick in 2012 and thought at the time to be one of the top two prospects in the organization (behind only Evgeny Kuznetsov), fell out of favor and was rendered expendable in a trade that brought Erat and Latta to the Caps. Erat's impact on the club in the 2013 stretch run was negligible - a goal and two assists in nine games to close the regular season. And that would be the high point. Erat did not register a point in any of the first four games of the first round playoff series against the New York Rangers and sustained an injured wrist in Game 4 that would end his season.

Here is a summary of the players obtained by the Caps at the trading deadline in this playoff era and their production over the rest of their respective seasons in which they were acquired: 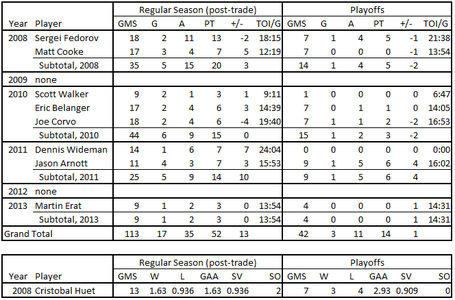 It is not an impressive summary of production. Looked at in a certain way, if you tilt your head and use a rose-colored glass through which to look at the group, you might cobble together an argument that Sergei Fedorov and Jason Arnott were impactful. It would be a stretch, though, especially when you consider that in one case the Caps were eliminated in the first round, and in the other they were swept in the second round. Certainly Cristobal Huet was impactful. Without him, or more precisely his performance over the last nine games of the 2007-2008 regular season, the Caps do not make the 2008 playoffs. But he did not carry that over into the post season. Two players - Dennis Wideman and Martin Erat - did not finish their seasons, both being casualties of injuries. Another - Scott Walker - dressed for only one playoff game in 2010.

Trade deadline day is fun for fans, in no small part for the hope and expectations the day and its deals generate. But in the cold light of day after the trades are made, do they matter? For the Washington Capitals, even if you think of trades as adding pieces to a solid squad, it would appear that the reality never quite justifies the hope.