The Little Things: Negative Ghostrider, the Pattern is Full

Share All sharing options for: The Little Things: Negative Ghostrider, the Pattern is Full

[Ed. Note: As a  complement to our "Moments that Mattered" series, we thought it would be helpful to point out some of the little things that happen during the course of a game. While these "little things" may not result in goals or show up on highlight reels, they are the building blocks from which winning performances are built. So there.]

It's no secret that the Washington Capitals struggle with puck possession at even strength (contra last night's opponent, the Los Angeles Kings, who are outstanding, leading the League in Fenwick Close percentage), ranking 22nd in the League at well under 50-percent, which is considered the dividing line between teams with a shot at playoff success and those that are destined to be also-rans. The question bedeviling astute Caps fans is, why are the Caps so bad at puck possession, and why have they been getting worse for years? It's a question that has moved from dens of statistical and systems analysis and into the mainstream, with Joe Beninati and Craig Laughlin engaging in a discussion of Fenwick-close during last night's broadcast.

There is likely no single answer to the Caps' puck-possession woes, but by examining some of the smaller, seemingly innocuous plays during a game, we can begin to better understand why the Caps find themselves on the wrong side of the puck-possession battle on most nights.

Roughly midway through last night's hard-fought contest between the Caps and the Kings, a strange composite line comprising Alex Ovechkin alongside the newly-acquired Dustin Penner and Chris Brown came barreling into the offensive zone with speed. The Caps were poised for an offensive-zone shift with possession. It didn't work out that way. First, the video:

Kings defenseman Robyn Regehr makes an excellent play to strip Penner of the puck and immediately finds an outlet in Jarret Stoll at the point. Regehr's quick pass could have caught the Caps off-balance, but thankfully Ovechkin and the defensemen - Dmitry Orlov and Patrick Wey - hadn't jumped into the play and are still in good position to cover the Kings through the neutral zone: 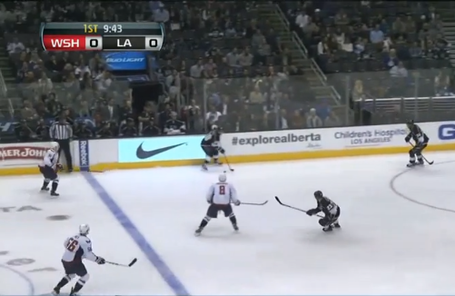 In the moment pictured, Ovechkin faces an important choice. He could:

These options are in roughly the order of what Ovechkin "should have" done. The best play would have been to force Stoll into making a quick pass by hitting him legally into the third row. Stoll was stationary and Ovechkin had him lined up. Stoll would have likely seen Ovechkin coming and either taken the hit and held the puck along the boards, chipped the puck to neutral, dropped it back to Dwight King (who was heading off for a change), or (less probably) attempted a dangerous pass between Ovechkin's legs to Brown.

By pressuring Stoll, Ovechkin would have forced him to pick from a menu of less than optimal choices. By taking the pass to Brown away, Ovechkin would have at least negated the one option where the Kings had some speed. By dropping to neutral and covering a lane, he could have allowed either Wey or Orlov to step up to take away time and space. Finally, if he'd been so tired that he couldn't make a play, he could have jumped off the ice. Going for a change when the other team has possession is risky, but the Caps had numbers back and the Caps' bench was in their own end.

Instead of any of these options, Ovechkin chooses to make like Maverick and do a fly-by:

Ovechkin starts toward Stoll like he's going to hit him, then he turns and looks as though he's trying to take away the passing lane to Brown by turning his skates sideways. It's a half-hearted attempt, as Ovechkin barely manages to get his stick on the ice and in the passing lane. Furthermore, because Ovechkin is going too fast and is allergic to starts and stops on defense, Stoll just has to wait a half-second before Ovechkin skates harmlessly out to center ice, where he proceeds to cover no one in particular. Stoll now has all the time and space he needs to either skate or pass the puck up-ice and, although what happens next isn't entirely on Ovechkin, the fly-by gave him that time and space. 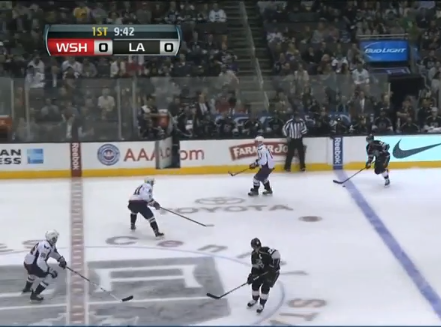 Here's where we see the Caps' neutral-zone system (and I use the term loosely) at work. The Caps have numbers back, with Ovechkin, Orlov, and Wey all between the puck-carrier and the defensive zone, with only Dustin Brown attacking with speed. Literally all the Caps defenders have to do was maintain a decent gap with Brown to prevent the cross-ice diagonal pass from Stoll. Except, true to form, the Caps couldn't manage that. Despite the fact that Stoll has one decent option and telegraphed his pass like Zimmermann, Wey gives Brown about 15 feet of room (the radius of the center faceoff circle is 15 feet), only moving to close that gap after Brown receives the pass. Brown easily gains the zone with possession and curls toward the boards to await his teammates.

Let that sink in for a moment. Despite having numbers back and out-manning the Kings 3-to-1 in the neutral zone, the Caps allowed the Kings to gain the zone with possession. 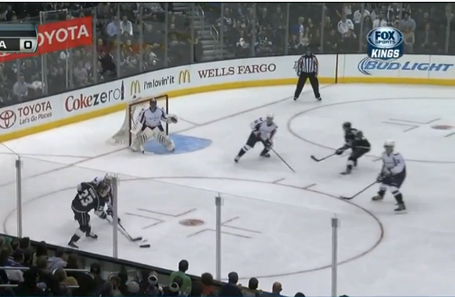 Stoll, being a smart, well-coached hockey player, doesn't just admire his pass, he immediately skates all-out to drive the net. Ovechkin doesn't pick him up, instead fixated on the puck and coasting toward Brown. Orlov picks up Stoll, but not until he was well into the slot (in accordance with Calle Johansson's apparent "back up 'til your goalie can smell your undergarments" strategy). Ovechkin is again in no-man's land. He isn't covering Stoll, he isn't pressuring Brown, and he certainly isn't covering Kyle Clifford, who'd replaced Dwight King and is streaking into the zone at Ovechkin's six o'clock. 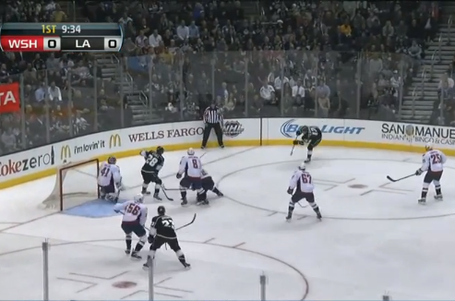 Brown makes a cross-ice pass, although it isn't clear if he's trying to hit Stoll streaking through the slot or if he's attempting to get the puck all the way across to Clifford. Fortunately for the Caps, Brown doesn't connect with Stoll, and his pass is well ahead of Clifford, who is forced to pick it up off the side boards. If the pass had been on target, it might have been a better scoring chance. As it is, Clifford ends up with the puck, a ton of time and space, and traffic in front of the net. The shot is at a sharp angle, and Halak freezes it, but giving up shots from around 30-feet away with traffic in front of the net is never a good idea.

Following a television timeout, the Kings win the ensuing faceoff (they're pretty good at that), and generate more offensive zone time and a missed shot by Doughty, while Nicklas Backstrom and Evgeny Kuznetsov waste a scarce shift playing defense:

What's most disturbing about this entire sequence is that the Caps were never outnumbered or badly out of position. They started out with possession in the offensive zone and, through poor systems play and inattention to detail, ended up surrendering a shot on goal and four Corsi events to the King's bottom-six forwards over the course of two shifts. The Kings didn't make any dazzling plays that required extraordinary skill or tremendous hustle. They made simple, even predictable plays and still managed to generate a shot on goal at even strength despite being outnumbered. Given how hard even-strength shots were to come by (the Kings only managed 20 last night), that's no small feat.

The Caps - mostly Ovechkin and Wey - utterly failed to do the "little things" correctly. If you're wondering why the Kings lead the league in puck-possession metrics (56.3% in Fenwick Close), while the Caps come in at 22nd (48.5%), in large part, it's the accumulation of little things like this over the course of 60 minutes.