Sittin' at the End of the (Capitals) Bar

The Peerless takes a gander at shots. No, not those kinds of shots. He also takes a look at ice time and this whole "first round draft picks on the roster" thing...if that's still a thing.

Share All sharing options for: Sittin' at the End of the (Capitals) Bar

It is a little known fact...

-- The Caps allow a lot of shots - 2,199 shots in 66 games through Monday's game against Pittsburgh (33.3 per game). But in three games that the Caps allowed 20 or fewer shots, they lost each time. They held Buffalo to 17 shots on goal on December 29th but lost to the Sabres, 2-1, in a trick-shot competition. The Caps allowed just 11 shots in Minnesota on January 4th but lost to the Wild, 5-3. On Monday, Washington allowed the Penguins only 20 shots on goal, yet dropped a 3-2 decision. Three times allowing 20 or fewer shots, and the Caps are 0-2-1. Go figure.

-- Speaking of shots... oh yeah, sure, you can buy me one if you want, but that's not the point we're about to make. The Caps have had their issues on defense this year. After Monday's game against Pittsburgh they were 24th in scoring defense, due in no small part to the fact that they were 25th in penalty killing. Here's the thing. According to the folks at stats.hockeyanalysis.com, the Caps were last - dead last - in the league in "Corsi-Against-per-60-minutes" in 4-on-5 shorthanded situations at 111.9. Here is what that number means. For every minute of penalty killing time expended, the Caps allow almost two shots to be directed at their net (1.87, actually). Meanwhile, the Flyers, who are the best in the league in this statistic, allow just 1.33 shot attempts per minute. You might not think that is much, but the Caps are more than 40 percent worse than the Flyers in allowing teams to tee it up on their power plays.

-- It gets worse... The Caps are not just the worst in the league in allowing shot attempts when playing 4-on-5, they spend an awful lot of time doing it. Only four teams - the Flyers, Los Angeles, Montreal, and Ottawa - have spent more time at 4-on-5 than the Caps, more than 360 minutes in 66 games through Monday.

-- The Caps are not getting better, either. They finished 29th last season in Corsi-against-per-60 minutes at 4-on-5 shorthanded, and they were 12th in total ice time spent at 4-on-5 shorthanded (251 minutes in 48 games). You may feel free to wonder if the team has been properly "coached up," as a former Redskin football coach might have put it.

-- Then there is the 5-on-5 play. Once upon a time, the Caps dominated teams at Verizon Center. Once upon a time. Not this upon a time. In 5-on-5 play at Verizon Center, the Caps were tied with St. Louis for 17th in Corsi-for-per-60-minutes (54.7). You might say, hey, St. Louis is pretty good. Real good in fact. So compare that to Corsi-against-per-60 minutes at home at 5-on-5. The Caps are 27th in the league; only Carolina, Montreal, and Toronto are worse. St. Louis? They're fifth in the league. The Blues are inhospitable at home. The Caps invite ‘em in.

-- On another subject, have you noticed something about the Caps' power play lately? Compare these two numbers for two Caps since the Olympic break (through Monday's game): 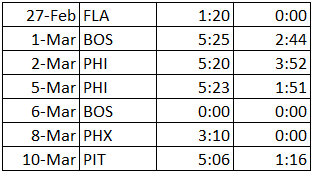 Those are the respective amounts of ice time for John Carlson and Mike Green on the power play, the column on the left being that for Carlson, the column on the right belonging to Green. Over those seven games Carlson averaged 3:41 a game on the man-advantage, while Green averaged 1:15. You could say that this is a product of Green being injured against Columbus on January 30th and missing the next five games heading into the Olympic break. Starting with that game against Columbus, Carlson averaged 6:47 in power play ice time until Green returned to the lineup on February 27th. However, Carlson has cleared the five-minute mark in power play ice time in three of the last five games, one of them being the penalty-free games against Boston last week. In those same games Green topped three minutes just once and did not get any power play ice time in two of them (including the penalty-free game against the Bruins). What you are seeing here could be a changing of the guard at power play quarterback.

-- Here is another set of numbers to chew on... 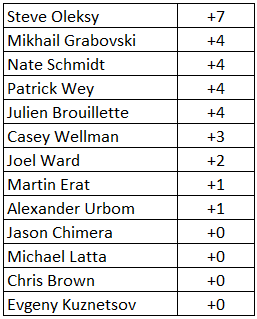 Can't figure out the significance of them? OK, then try this... 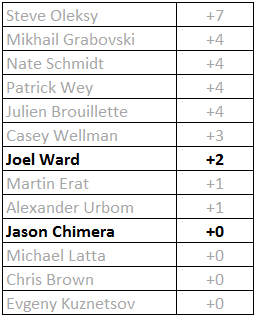 These are the plus-minus values (through Monday's game) for those Caps who played more than ten games for the Caps this season, who are still with the organization, or who are not injured. One player on the plus side of the ledger. One. Of the others, seven are either at or shuttling back and forth to and from Hershey, two (Erat and Urbom) are no longer in the organization, one is injured (Grabovski), and one played his first NHL game on Monday night. Meanwhile, there is Alex Ovechkin at minus-26, 838th of 841 skaters this season in plus-minus. Only Steve Ott, Alexander Edler, and Nail Yakupov were worse through Monday's games. Since Ott is now in St. Louis, not with the ghastly Buffalo Sabres, and Yakupov is actually a plus-2 over his last 11 games (raising him to minus-30, still last in the league), Ovechkin might end up on the bottom of this list, yet.

There are 2,940 games of regular season experience in that group through Monday's game. Sure, Wilson has 66 games and Kuznetsov just dressed for his first game on Monday. Somehow, though, with that many draft picks - first round draft picks - sprinkled through the lineup, one would not expect this to be a team that is on the outside looking in at the playoffs.

-- The Caps have dressed 34 skaters this season. Only four teams in the NHL have dressed more through Monday: Buffalo (38), Pittsburgh (36), Calgary (35), Edmonton (35). Nine Caps have played fewer than ten games, 13 played 20 or fewer games, reflecting a fair amount of roster churning.

Always end on a happy note.