The Winter Olympics can be exciting for hockey fans, that two-week span in February once every four years offering us all a chance to see the best players in the world go head-to-head. The jerseys may be different, the fighting removed, but the intensity and the skill is on full display as the countries battle it out for Olympic gold.

This year's Games in Sochi did offer some of that - but for the Caps who participated, and likely for a lot of Caps fans, the tournament could not have ended soon enough.

The charters that departed from Newark a little over two weeks ago included five Caps among their precious cargo. Alex Ovechkin, of course, was headed home to help guide his team to the only medal Mother Russia cared about. John Carlson was poised to take his Real American Hero act to the big stage in his first Olympics. Nicklas Backstrom and Marcus Johansson would be donning the Tre Kronor on a stacked Swedish team, the former appearing in his second Olympics and the latter getting a chance at his first after an injury to Henrik Sedin. And Martin Erat, another injury replacement, would join the Czech Republic team in his third Olympic go-round.

"It’s a tremendous amount of pressure and you can only control so many of the variables. It’s not like it’s an individual sport, it’s different."-Adam Oates, 2/9/14

For so many players, particularly those born outside of North America, winning an Olympic medal is on the same level as (or perhaps even above) winning the Stanley Cup; competing for country is often a lifelong dream. At the 2014 Olympics, however, it was amazing how quickly that dream became a nightmare for some of the Caps' Olympians.

Of the five, Johansson perhaps had the "best" (a relative term, to be sure) Olympics. An injury replacement-turned-healthy scratch, he found himself watching the first game of the tournament from the stands thanks to the Swedish team's depth up the middle - that is until Henrik Zetterberg was sidelined with an injury for the remainder of the Games. Johansson stepped in for the final five matchups, bouncing around the lineup and even taking a turn as the top-line center before finishing with one assist and a silver medal. Nothing too groundbreaking but a respectable first Olympics, and one that would be considered uneventful... if he could only get back in the country. Johansson's return is currently delayed by visa issues, which should (hopefully) be cleared up in time for him to be in the lineup Thursday night.

Erat's Olympics were also relatively quiet, but they were also relatively short. Added to the Czech roster after Vladimir Sobotka pulled out due to injury, Erat was probably hoping the change in scenery would turn around what has been a pretty miserable year for him (both of his own making and circumstances beyond his control). Early on it seemed like it just might have done the trick, too, as he picked up a goal in the Czech Republic's second game, with the opposing goalie in net and everything. But the Czech team would struggle out of the gate, their lone win in the preliminary round relegating them to the qualifying round. And after briefly finding their stride en route to a victory over Slovakia, they were bounced in the quarterfinal by what seemed to be a powerhouse US team.

Erat's Olympic output was limited to just the single goal, with amazingly not a single assist in the tournament - but he did return home to a brand-new daughter, so he probably didn't mind it all that much.

So what about that powerhouse US team? The Caps' lone American representative - and the team's first American Olympian ever - was John Carlson, appearing in his first Olympics (and his first international competition since downing the Canadian team in the 2010 World Juniors). Things could not have gotten off to a better start for Carlson, as he scored the team's first goal in the first game and added an assist as the US team downed Slovakia by a dominant 7-1 score.

From there, though, Carlson's tournament started to unravel a bit. His ice time dipped in the next three games, including just 3:56 in the thrilling win over Russia. And when Paul Martin got injured, Carlson drew the unlucky task of skating alongside Brooks Orpik for the medal round; he was on the ice for the lone goal in the loss to Canada, his best shift coming in the dying minutes of the game when Orpik was on the bench, and registered just one shot in the team's lackluster loss in the bronze medal game. As one of the team's younger members, it was probably about the experience more than anything, but for a US team expected to bring home a medal, leaving Sochi empty-handed (and looking bad in the process) was nothing short of disappointment for all involved.

Speaking of disappointment... look no further than Nicklas Backstrom, whose Olympics were marred by a bizarre turn of events at the worst possible time. Up until the gold medal game, things had been going relatively well for Backstrom. He stepped into the spot left vacant by Henrik Sedin and was starting to mesh well with his linemates, driving the power play the way only he can and racking up four assists in five games. The Swedish team, while at times looking less than dominant, rolled to the medal game undefeated and appeared poised to at least give Team Canada a fight for the gold.

Backstrom Bounced - What They're Saying Backstrom Victim of Testing Debacle

But then things started to get weird.

The day of the gold-medal game, reports started to surface that Backstrom, who had been on the lineup card for the game, did not skate in warmups. Then there was a rumor that he was out with a migraine, something that would be frustrating and sad but understandable given his history with that particular malady. Soon after, however, it was revealed that Backstrom had been yanked from the lineup just two hours before puck drop after testing positive for a banned substance - what turned out to be elevated levels of pseudophedrine, from allergy medications, that were just outside the allowable amount by the IOC.

The timeline and circumstances surrounding the failed test and the events that followed after are a bit confusing, and everyone from the NHLPA to the IIHF to Sweden's tinfoil hat-wearing GM have been trying to correct the situation. But the bottom line is that Backstrom was forced to sit out what was likely the biggest game of his career, and after Sweden's 3-0 loss to the Canadians, even his silver medal is - and continues to be - in question. Just a bad situation all around, and one that isn't over just yet.

Which brings us to Alex Ovechkin, who had the most at stake of any of the five Caps in these Olympic games - and almost assuredly had the worst time of all of them.

Like Carlson, his tournament started with a bang, as he, too, scored his team's first goal and added an assist. And like Carlson, things began to unravel - only it started to happen much more quickly, as the Russians turned a dominant start in that opening game into a nailbiter of a win. And after a shootout loss to the Americans and a shootout win over Slovakia, Ovechkin and Team Russia found themselves in the surprising position of having to qualify for the quarterfinals on their own turf. They managed to do so, but the 4-0 win over lowly Norway wasn't nearly as dominant as the score looked... and then it was on to the quarterfinals, where their lack of depth on the blue line (among other issues) showed through as they fell to Finland 3-1, leaving a stunned Russian crowd and a dejected Ovechkin to take the blame yet again.

And yet while the result of the Games was disappointing for Ovechkin, the worst of it was off the ice, away from hockey. Shortly after being eliminated from his hometown Olympics, Ovechkin learned that his father was in the hospital after having "heart issues" and undergoing surgery. He remained in Sochi to be with his family through the end of the Games, returning to the States on Sunday evening. Thankfully it appears that Mikhail Ovechkin is on the mend and will be back in Moscow in a few days, while Alex was back on the ice with his Caps' teammates earlier today - but there's no question that his father's health issues cast a shadow over an already dismal Olympic experience for him. 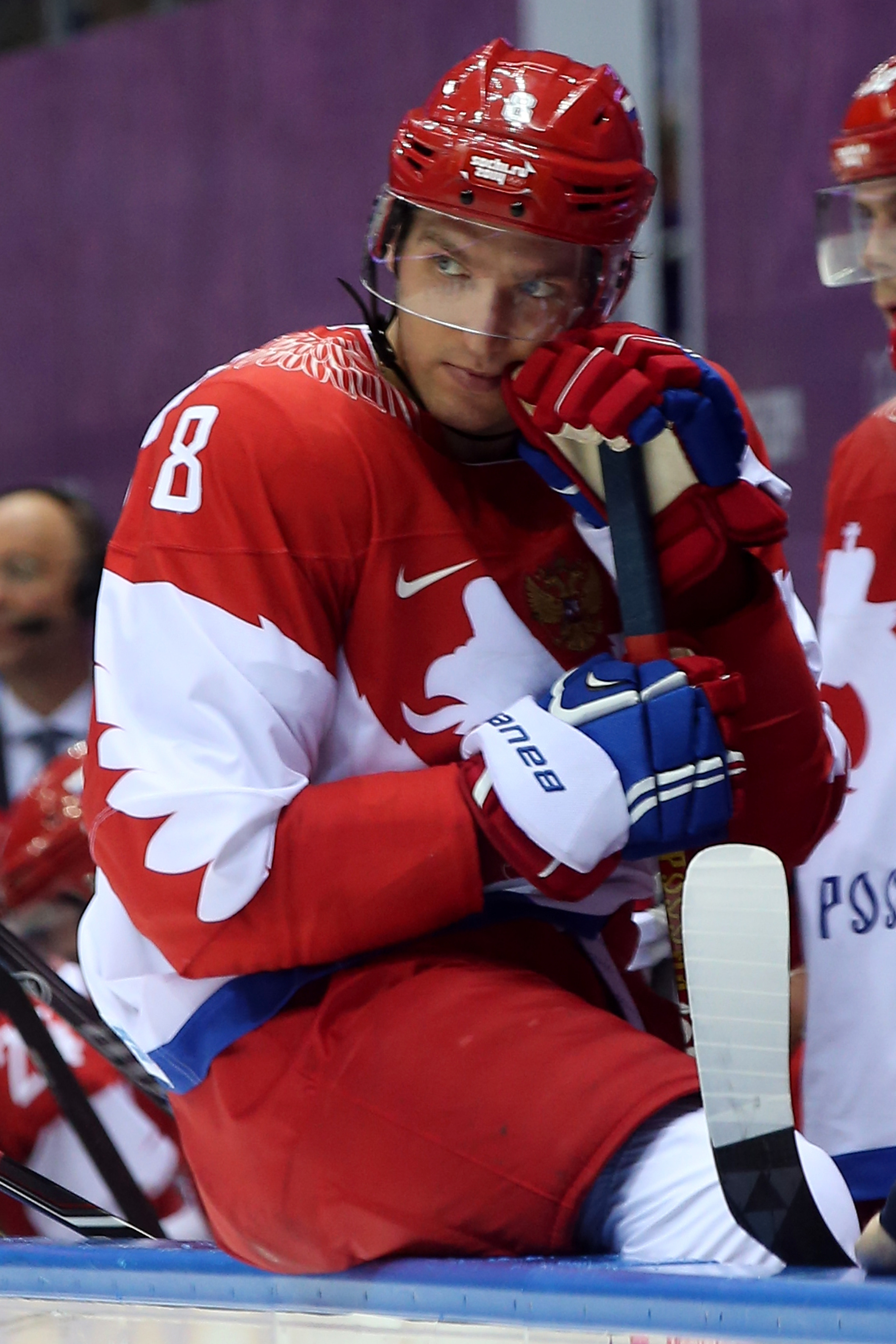 The good news - the best news, really - is that all five Caps have returned (or will, as long as Johansson's paperwork gets done) stateside with perhaps a broken heart or some wounded pride, but otherwise perfectly healthy. As Caps fans hoping that the team is equipped to finish out the season on a high note, that is really all any of us could hope for. After all, national pride is great but ultimately the jersey most of us care about is the one with the weagle on the shoulder.

The hope now is that all five of them can put it all behind them and turn their focus back to the Caps, as the regular season is set to start up again for them this Thursday night. Whatever disappointments and triumphs they had in Sochi will hopefully serve as valuable experience... and perhaps make them a little extra angry, and a little extra motivated to make something happen here in DC.

Because there is still plenty of work to be done, and it starts now.