Is It Time for a Bigger Role for Tom Wilson?

It's been a tough freshman campaign for the big winger, but is he ready for more ice time?

Share All sharing options for: Is It Time for a Bigger Role for Tom Wilson?

It's not going to happen, but that doesn't mean that it shouldn't.

Back in October, the Caps had a decision to make on 2012 first-round draft pick Tom Wilson: keep him in Washington or send him back to juniors, options that at their core (you'd hope) boiled down to balancing the player's long-term development with the team's immediate needs.

Following Wilson's NHL debut in last year's playoffs, Caps' General Manager George McPhee said of the decision he'd have to make the following Fall, "‘We’re going to do what’s best for your development. Is it go back to junior, be on the power play and kill penalties and score 40 goals or come and play with us for 8 to 10 minutes a game and survive? I don’t want him to be a career survivor, though. I want him to develop."

By September, that eight-to-ten minutes per night had dropped: "Is six or eight minutes a game going to be enough? I’m not sure that that would be the way to go, but some players have done it and grown. That’s part of it."

More: Tom Wilson and the Ticking Clock The Kids are Alright... But is Alright Enough? Tom Wilson and Connor Carrick: Ready for the Next Step... but Where? Is Tom Wilson The Missing Piece?

But by the time the call had to be made, the decision "was an easy one" for McPhee. Alex Ovechkin referred to him as the "kind of piece [they]'ve been missing." Brooks Laich said he "really fits the identity of [the] team." Adam Oates said, "He acts like he belongs." And so on.

Yet here we are, 59 games into Tom Wilson's rookie season, and he's averaging 7:13 per game - 146th among NHL rookies and dead last on the Caps, and that really hasn't changed much over the course of the campaign: 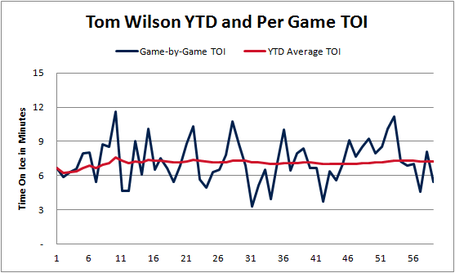 On one hand, it's good that he hasn't played more in that it's an indication that the team has had good health (knock on wood) down the right side of the roster (to wit, Troy Brouwer and Joel Ward have yet to miss a game, while Alex Ovechkin has sat out just four). On the other hand, is Wilson really developing with those minutes? On the season he has just two goals (the second of which came just before the break) and six assists (half of which have come in his last nine games), and he's only fired 39 shots on goal (including a 17-game span during which he registered a grand total of just one). Moreover, his possession numbers are a bit rough, despite relatively easy minutes.

Then again, is it the minutes... or the linemates? Spoiler alert: it's the latter (and maybe just one teammate in particular). Here's a look at Wilson's Corsi-For percentage with his most frequent five-on-five linemates (via stats.hockeyanalysis.com, and small sample caveats certainly apply, as only the top four there are combos that have seen more than 75 minutes of ice together): 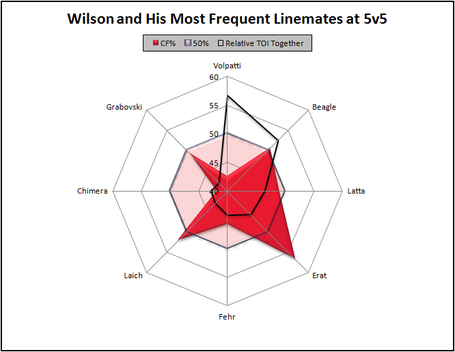 That's pretty stark - when Wilson is on the ice with his most-frequent linemate, Aaron Volpatti, only 42.5% of shot attempts taken have been directed at the opponents' net (and, for what it's worth, one-third of the goals scored have gone the Caps' way). With everyone else (except Jason Chimera), those numbers are better, and, for the guys who could even be considered top-six forwards, those numbers are (unsurprisingly) even higher. In fact, in the 177 minutes Wilson has spent away from Volpatti at five-on-five, his CF% is 53.5% and his GF% is 60% - both are numbers that would be tops among the team's forwards. (Laughably, Volpatti's CF% away from Wilson is 28.4%.) 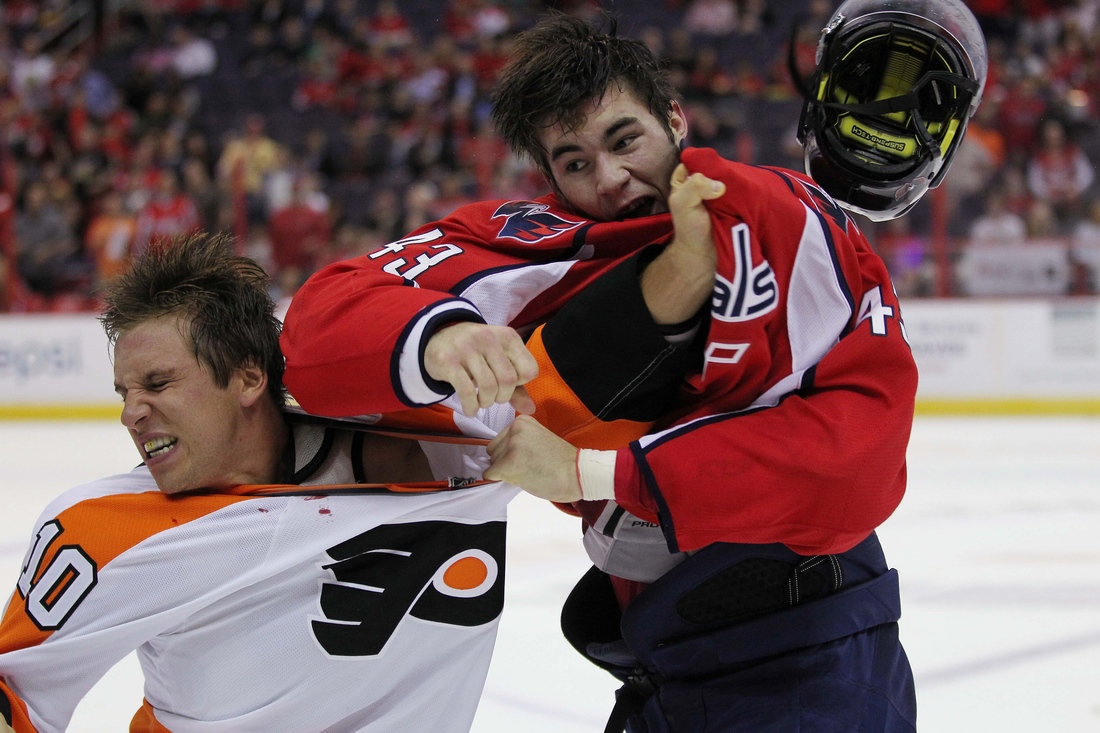 Barring an injury, it's extremely unlikely that Wilson will supplant Brouwer on the second line any time soon, and he's not necessarily cut out for third-line duty right now (and there's no reason to break up the very effective wing pairing of Ward and Jason Chimera anyway). So in all likelihood, Wilson will continue along as he has so far, which is a bit unfortunate, given that Wilson quite possibly could do more to help this team than the occasional big (sometimes questionable) hit or energizing fight - the four points he's collected over the last nine games hint at as much, and the body of work he's compiling suggest that he's neither an anchor nor a sideshow.

And here's another point to consider: all three of the right wings ahead of Wilson on the depth chart are signed through at least next season. Is Wilson destined to spend 2013-14 on the fourth line? Will a right-handed shot (gasp!) be flipped over to the left side? Will one of Brouwer or Ward be shipped out of town? All of these questions would be easier to answer with more time to assess Wilson's ability to contribute in a larger role.

At the very least, the Caps need to bolster the fourth line so that they're not a complete liability, and that likely means jettisoning Volpatti. Who knows, a reconstructed fourth line could even earn more than seven minutes a night, and Tom Wilson could develop his game more along the lines of what was probably envisioned for him at the outset of the season. After all, when it comes to Wilson, it's not necessarily about the regular season. As McPhee said back in October:

"In the playoffs, we made a note after one of the games. It was to remember these games when we’re at the draft. Remember how intense they are, how demanding they are, how physical they are, and make sure we get someone who wants to play in that kind of stuff."

The Caps have 23 games left in the regular season, and if they don't treat them as if they were the playoffs, there won't be any playoffs. It's time to see a bit more of what Tom Wilson can do.