Road to Sochi: An Olympic Primer

A quick rundown of some things you should know ahead of this year's tournament in Sochi.

Share All sharing options for: Road to Sochi: An Olympic Primer

Although the 22nd Winter Olympics have been underway in Sochi for a few days now, tomorrow kicks off the portion of the festivities on which many hockey fans will be focusing - the men's hockey tournament. It's the ultimate in international hockey competition, pitting the best in the world against one another (and at times, teammate against teammate) for the next two weeks with all sights set on a gold medal.

And while the tournament may be peppered with the familiar names and faces of NHL stars, there are plenty of differences between the Olympic format and the NHL game. So what should you know going into the tournament? Here's a quick breakdown of some things you might need to know - and some things to keep an eye on - at the Olympics.

The Format
This year's tournament will feature twelve teams broken up into three groups: Group A (Russia, Slovakia, USA, Slovenia); Group B (Finland, Canada, Austria, Norway); and Group C (Czech Republic, Sweden, Switzerland, Latvia). The preliminary round will pit teams against the others in their group - so, for example, Team USA will play one game each against Russia, Slovakia and Slovenia in this opening round.

Teams will be awarded points for wins and overtime/shootout losses (more on that shortly), and at the completion of the preliminary round, the top four teams in the standings will get a bye to the quarterfinal round and a position as a "home" team in that round. The remaining eight teams are ranked 5-12 and play a qualifying round, with 5 playing 12, 6 playing 11, etc.

(For more information, check out the detailed summary over at NHL.com.) 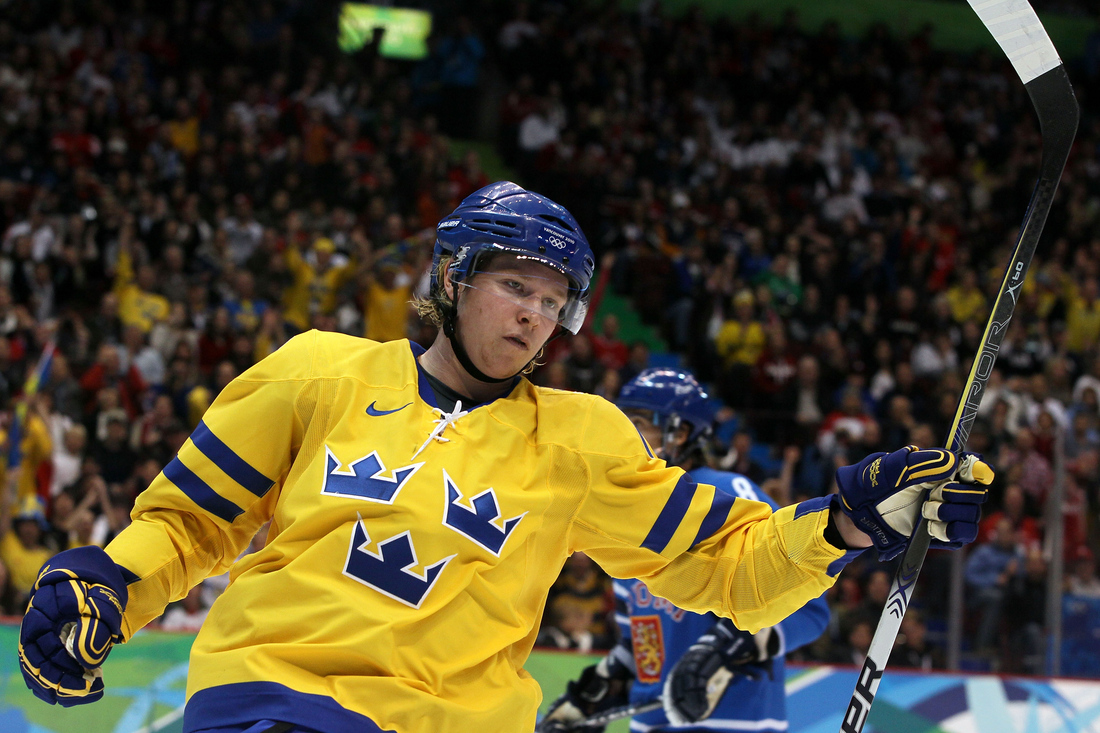 The different-sized ice surface is one of the bigger changes from the NHL game to the international game, with both rinks checking in at 200 feet in length but the international surface at Sochi 15 feet wider. That means more space on the outside of each zone, a larger neutral zone and more space between the end boards and the goal line.

Here's how it all shakes out: 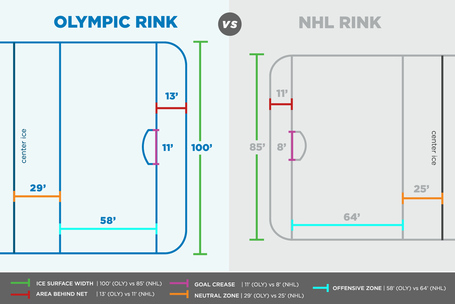 Worth noting that since the NHL started sending players to the Olympics in 1998, the Games have been played on international-size ice three of the four times (yes, the ice in Salt Lake City used "international" dimensions), and two of those three gold medals have gone to European teams. After an NHL-sized surface in Vancouver, will the switch back to the larger ice have an impact on the North American squads? Something to keep an eye on...

There are quite a few differences between international hockey rules and the NHL game that could come into play during the tournament.

For one thing, there's no fighting allowed. Dropping the gloves in the Olympics will earn you not only the usual five-minute major but also an automatic game misconduct or match penalty. So just in case you were wondering why the John Scotts and Colton Orrs didn't make the Canadian team, well... that's one of many reasons why.

Gone is the trapezoid, so goalies are free to play the puck anywhere behind the net. They're also pretty safe from getting knocked down, because players are not allowed to stand in the goalie crease - it's called a crease violation under Olympic rules, and doing so results in a whistle and moves the faceoff out of the attacking zone. And instead of the NHL's newly adopted hybrid icing, international hockey rules dictate that icing is automatic or "no-touch", which means the play is blown dead as soon as the puck crosses the goal line, regardless of where players from either team may be in the chase.

Unlike the NHL's unbalanced points system, Olympic hockey runs on a three-point system - in other words, every game is worth three points total, regardless of outcome. Teams are awarded three points for a regulation win and zero for a regulation loss; an overtime awards a point to each team, with the winning team (in the overtime frame or a shootout) picking up the extra point. Overtime in the preliminary round mirrors the four-on-four, five-minute setup of the NHL, but increases to ten minutes in the quarterfinals, semifinals and bronze-medal game, and to twenty minutes in the gold-medal game.

One extra twist in international shootout rules is that players can be re-used if the game has not been decided after the first three rounds... which can make things interesting and pretty hilarious. Curious as to what that would look like? Just take a gander at one of the more memorable World Junior Championship shootouts back in 2007.

The Schedule
Preliminary Round:

Alex Ovechkin - Ovechkin is by far the most experienced of all the Caps headed to the Olympics, with a slew of international tournaments on his resume. He twice competed for Russia in the World Junior U18 tournament. racking up an insane 23 goals and 8 assists in 14 games en route to a silver medal in 2002 and a bronze in 2003. He also made three World Junior appearances (18 GP, 18G, 7A), winning another silver in 2004, and has appeared in 56 World Championship games, with 27 goals and 19 assists over that time (and a gold medal in 2008). This trip home for the Olympics will be his third, as he continues to look for his first Olympic medal.

Nicklas Backstrom - Like Ovechkin, Backstrom's international experience has largely been gathered on the World Junior and World Championship stage, although he actually made his debut at the World Championship level before playing for Team Sweden in the U20 tournament. He has 14 points (4G, 10A) in 24 WC games, with another 7 assists in 7 games at the WJC. This will be his second Olympic experience, debuting with Team Sweden in Vancouver and picking up six points (1G, 5A) in four games before his team was eliminated in the quarterfinals.

Marcus Johansson - One of two Caps without any non-junior international experience, Johansson heads to Sochi with two appearances for Team Sweden on the U18 squad and two turns at the WJC under his belt. In those 23 games he amassed six goals and eleven assists, as well as two bronze medals and a silver. A late addition to Team Sweden for the Olympics, Johansson was named to the squad earlier this week when Henrik Sedin had to pull out from the tournament due to injury.

John Carlson - An Olympic rookie, Carlson's international experience is limited to just the one appearance at the World Juniors in 2009-10... but it was a pretty memorable and important appearance. By the end of the seven-game tournament, Carlson had accumulated four goals and three assists, including the overtime gold medal-winning goal against rival Canada. And not that you need a reminder, but we are contractually obligated to show this every time we speak of it:

Martin Erat - Also a late injury replacement, Erat was added to the Czech Republic Olympic team in place of St. Louis's Vladimir Sobotka. Erat trails only Ovechkin as the most experienced on the international stage, with one appearance in both the U18 and WJC tournaments (two goals and three assists in those 13 games combined) and three more at the World Championships. Like Ovechkin, this will be Erat's third trip to the Olympic Games; unlike Ovechkin, he has a medal, capturing bronze in 2006 at Torino before a disappointing 7th-place finish in Vancouver.

That about wraps it up - the tournament gets underway tomorrow at noon, with Backstrom and Johansson facing off against their big goal-scoring teammate, Martin Erat. Who comes out on top in the first Cap vs. Cap battle? Who has the best team overall? Will Canada repeat for gold or does Russia have a bit of home-ice retribution (and redemption) in store? Stay tuned...