Japers' Rink Mailbag: Eric Fehr on the Power Play and Lots of Shots (Against)

A look at a power-play personnel and an age-old "system vs. personnel" query in this week's installment of "you ask, we answer."

Share All sharing options for: Japers' Rink Mailbag: Eric Fehr on the Power Play and Lots of Shots (Against)

Our first question looks at what's likely one of the most coveted jobs in hockey - trigger man on the Caps' top power-play unit:

@JapersRink are you doing a mail bag soon? Why haven't we seen Fehr in the high slot during the PP ever this year? #coachoates?

To answer the first question, yes, you're reading it.

As for the second question, it's something I've wondered about myself, and the Caps have plenty of options there, so let's discuss them. The way the Caps' 1-3-1 power play is set up, the guy in that trigger position needs to be right-handed. Beyond that, you'd want someone with a quick release and a hard, accurate shot. Given that Alex Ovechkin is going to play out on the half-boards, that basically leaves Troy Brouwer, Joel Ward and Eric Fehr (sorry Tom Wilson), who meet those qualifications in varying degrees.

Brouwer is the top unit incumbent and has enjoyed a tremendous amount of success in that role, potting a dozen power-play goals since Adam Oates got to town, 19th-most in the League over that span since the start of last season. His pace has slowed dramatically, however, and he has just one extra-man tally in 33 games since November 9. On the season, he's averaging 3:25 of power-play time per game.

Ward has done a great job in his limited power-play time, scoring four times in half of Brouwer's ice time (and usually with second-unit linemates). In fact, he's scoring five-on-four goals at a rate that ranks second on the team to Ovechkin. The issue with Ward, however, is that he's a third-liner. Why does that matter? Oates has shown a pretty common desire to put his third line out for the shift after a power-play (whether it ends with a goal or the less-enjoyable way), so if Ward is skating with the second power-play unit, he's often unavailable for that next even-strength shift (as we saw at times with Marcus Johansson when he was dropped down to that trio), and that's not ideal.

And then there's Fehr, a top-six right-hander with a quick (enough) release and a good shot. So why is he only getting 35 seconds of power-play time per night (which is up significantly thanks to six minutes on the extra-man unit over the past two games, owing largely to Ovechkin missing some time)? Probably because Adam Oates is reluctant to change up the personnel that has been so successful for him (current trend notwithstanding), figuring they're bound to snap out of this funk sooner rather than later.

Personally, at 1-for-21 over the last seven games and given Brouwer's lack of production (and, at times, noticeably poor decision-making in that spot), I'd give Fehr a shot. And perhaps Oates will - here (via ShiftChart) is the quintet that Oates sent out for the last power-play the team had with Ovechkin in the lineup:

Granted, Brouwer had just finished the shift that drew the penalty, but perhaps Oates is ready to make a change on his top power-play unit. Stay tuned.

Our second question is one that's been on everyone's mind all season, and we'll let Rob answer it:

@JapersRink Why do the Caps give up so many shots? Is it lack of good defensemen, style/system of play, something else?

This question is a bit old, but still quite applicable - the Caps are surrendering even-strength shots on goal at the fourth-worst rate in the League. As is usually the case with a question like this, the answer is "a little bit of all of the above." We have discussed the need to improve the defensive corps since before the season started, and that situation hasn't changed.

John Erskine started in the top four, but that didn't last long (and, if last game is any indication, his time in the top-six might also be nearing an end... that we could see coming). Unfortunately for the Caps, the replacements have come in the form of Nate Schmidt, Steve Oleksy, Alexander Urbom, Connor Carrick, Patrick Wey, Dmitry Orlov, and Tyson Strachan. Of that group, only Strachan started the season with more than 82 NHL games played (i.e. had more than a season's worth of experience) and he started this season, his sixth in the NHL, with only 120 total games played (i.e. he's not that good). Only Orlov has surpassed the 82-game mark this year (and seemingly somewhat begrudgingly by the coaching staff). That means that after the top three defenders on the roster, the Caps have Erskine, six defenders with minimal experience, and a career journeyman that averages 24 games per season (an average that will almost surely drop after this year). Simply put, that isn't the type of personnel that takes teams deep in the playoffs.

Green and Orlov: A Potent Pair

Green and Orlov: A Potent Pair

But beyond personnel, there is clearly a systemic element to the problem. Even the defenders that have experience (Karl Alzner, John Carlson, Mike Green and Erskine) aren't playing to their past standards. At best, one of the three is playing at a level Caps fans are used to (for the obtuse, that would be Carlson... though if you'd prefer to focus solely on possession metrics, swap Green in for our American hero). What is it that makes even the experienced NHL defenders struggle?

It may be that the defensive system is too complicated to understand or difficult to implement, but I find that unlikely. Oates has played in and coached in the NHL since before any of the defensemen he dressed on Tuesday night was even born (fun fact: Oates's NHL debut came two days before Green came into the world), including involvement in many successful teams. Presumably he knows what it takes for a team to win. That he would institute a system that cannot be executed may not be impossible, but it certainly defies logic.

I find it more likely that the defensive issues are not that the defenders cannot understand or execute their assignments, but that they are asked to play defense far too much. That is to say, the Capitals are playing without the puck more than they are playing with the puck (notwithstanding the recent fruitless streak of strong puck possession). When the forwards are unable to maintain puck possession in the offensive zone, the defense is put under greater pressure and will begin to surrender shots against (case in point, over the past dozen games of good possession numbers, the Caps have allowed just 29.5 shots-against per night, a middle-of-the-pack number, though there are score effects at play there as well). Factor in an inexperienced (and in most cases mediocre) defensive corps, and the problems are exacerbated. Until the Capitals can upgrade the personnel on defense or improve their ability to keep the puck on the far side of the ice from their goaltender, I wouldn't expect much improvement in the shots against column.

How about one more for the road?

@JapersRink cap $$ aside, are we better off now w/ grabo or keeping ribs?

While we could discuss each player's advanced metrics and box cars (and they're pretty similar - Mikhail Grabovski has nine goals and 16 assists at even-strength, Mike Ribeiro has nine and 15; Grabo has three goals and five assists on the power-play, Ribs has three and seven (in far more minutes)), and we can never ignore contracts in a salary-capped league, perhaps we'll just let this image (via @DimFilipovic) from last night do the talking: 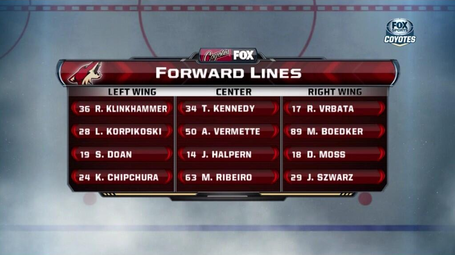 The Caps have enough problems right now, and Mike Ribeiro (and all that comes with him) doesn't really address any of them, except perhaps the slumping power play. Give me Grabo every day of the week and twice on game day.

If you've got something on your mind, go ahead and ask it here on the site, on Twitter (use #JapersMailbag), via email or on Facebook, and we'll try to get to them. There are always a lot of question marks around this team... so let's talk about as many of them as we can.