Of the 98 post-second-round draft picks George McPhee has made during tenure as Caps general manager (which dates back to a few weeks before the 1997 Entry Draft), just one skater has appeared in more than 30 games for the team: Mathieu Perreault, a sixth-round selection (177th overall) in 2006. In fact, Perreault's 159 regular season games played in a Caps sweater is three more than the combined total of every single player McPhee has taken in the third round or later (a list that notably includes Braden Holtby and Cody Eakin... and not much more, though Johnny Oduya, Krys Barch, Sami Lepisto, Tim Kennedy and others have seen time elsewhere after first hearing their names called by the Caps).

After being picked, Perreault posted back-to-back monster years in the QMJHL (averaging 37 goals and 79 assists in 66 games played) and transitioned well to the AHL, averaging 0.65, 0.89 and then 1.03 points per game in parts of three seasons in Hershey. Since making the leap to the NHL, he's been a consistent performer (in aggregate), averaging between 0.40 to 0.47 points per game in parts of four seasons that have seen him in various roles and with generally limited (in terms of time and teammates) power-play opportunities. He's been among the team's most-productive even-strength forwards (in terms of scoring rate), and has put up impressive possession numbers on a team that hasn't always. 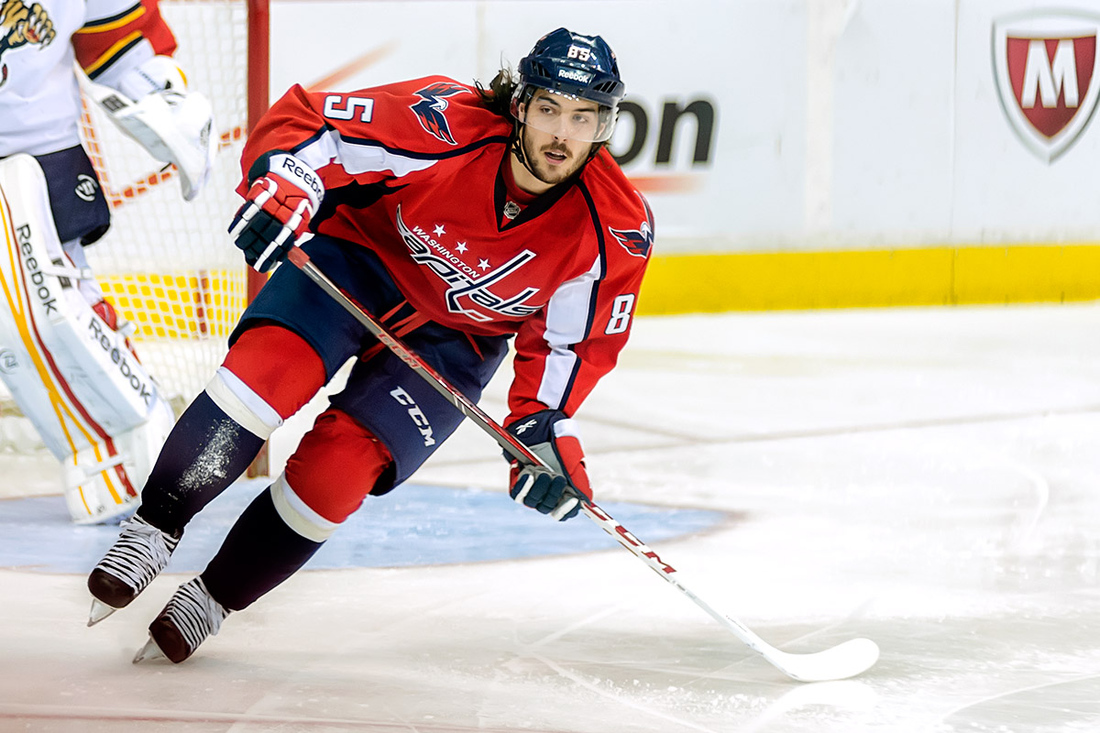 Mathieu Perreault does the little things (including being unafraid of going into high-traffic areas), and even when he's not contributing offensively, he's rarely hurting the team - over his last 31 games during the 2013 regular season, Perreault was only on the ice for eight even-strength goals-against.

Oh, and he's done all of this for next to nothing (well, in terms of NHL dollars, at least). How cheap have Perreault's services come? Had he been on the NHL roster for every day of the last four seasons, and had the NHL played a full schedule last year, Perreault would have made $2,875,000 in salary, which is roughly one pseudoceleb-smashable Mercedes G-Class SUV less than each year of Joel Ward's current contract is worth. (And yes, if he'd been on the roster for every day of the last four seasons, he'd probably have earned a bigger contract at some point along the way, but just go with it.)

Anyway, Perreault would seem to have been quite the bargain to date, and his $1,050,000 2013-14 cap hit as he plays out the second year of his current deal hardly sounds like much at all (again, in terms of NHL dollars, at least). But what does the market say? Via CapGeek, here are Perreault's 20-closest cap comparable forwards for the upcoming season (click to enlarge): 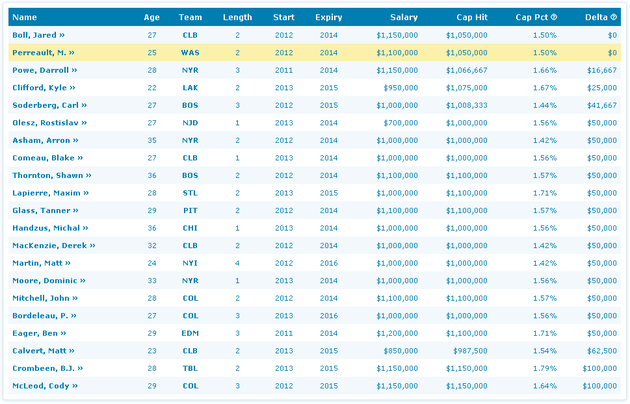 In terms of production, over the past two seasons, Perreault has the most goals, assists and points of anyone on the list (despite being in the middle of the pack in games played), the highest per-game points rate and lowest per-game penalty minute clip, and the best plus-minus on the list. The average stat line of the guys on this list over the two seasons is 94 games played, eight goals, 12 assists, a minus-six rating and 108 PIMs (yeah, lots of face-punchers in this group); Perreault, over the same span, has played 103 regular-season games, scored 22 goals, added 25 assists, posted a plus-16 rating and has taken just 24 minutes in penalties. In fact, over the past two seasons, Perreault has averaged more points per game than anyone in the League who has played 82 games and fewer than 1300 minutes (a crude way to get a look at production among smaller-minute players, but you get the point). Going back to his cap comparables list, in 2013, his 17 points in 39 games was second only to John Mitchell's 20 points in 47 games.

So that's a bit about Perreault's production among the list of forwards that will carry with them cap hits around $1.05 million for 2013-14. Now let's throw in their usage to add more context (via Hockey Abstract) : 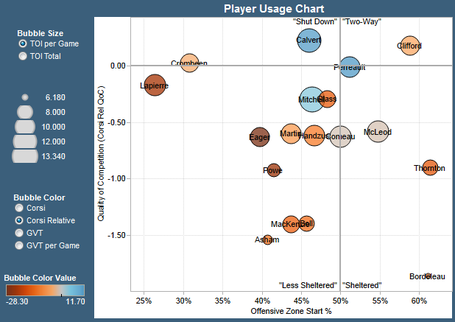 Only three players - Perreault, Mitchell and Matt Calvert - are in the blue here, and the chart is littered with some pretty atrocious puck-possessors (granted, a lot of the guys on this list have a very, um, specialized role and may or may not even carry sticks with them onto the ice for every shift; also, kudos to Michal Handzus for falling into the right situation - he certainly doesn't look like a Stanley Cup champ's second-line center here... or anywhere, really). It's reasonable to wonder whether Perreault would have the same success in an increased or different role, but he can only play the minutes he's given, and he's been beating them handily for years.

Mathieu Perreault is entering the final season of the two-year deal he inked back in July of 2012, and he'll still be a restricted free agent next summer if he doesn't sign an extension before then. For a while this summer (i.e. pre-Mikhail Grabovski) it looked as if he might wind up with another shot at centering the second line (McPhee's professed certainty regarding Brooks Laich's ability to hold down that position notwithstanding), and at some point he might yet. But for now Perreault looks to be penciled in as a terrific third-line center, one who's making his teammates better, and one who's very likely to out-perform his current contract, possibly by a great deal... which is exactly what the Caps have him on for at least one more season.